A Title Shot, not Revenge, is Mir's Motivation

"I want to win and keep myself in the running for bigger things.” - Frank Mir 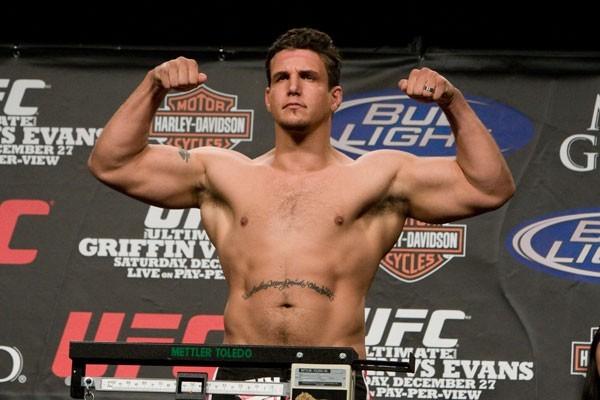 When your next opponent sports an overflowing belly like Larry the Cable Guy and a shaggy mullet that would make Billy Ray Cyrus jealous, it might be tempting to underestimate him just a tad. But former UFC champ Frank Mir promises he won’t commit that faux pas against Roy “Big Country” Nelson on Saturday night.

“Roy might be one of the toughest heavyweights; he won’t go away easily,” Mir said recently, following a training session at his Suffer Gym in Las Vegas. “He’s taken probably the most brutal beating we’ve seen so far against (Junior) Dos Santos and never cashed his chips in. Most people wouldn’t take a beating like that and keep marching forward.”

Indeed, Frank Mir is the last person on earth you would expect to overlook Roy Nelson, especially since the latter defeated him eight years ago in a famed Grappler’s Quest submission grappling match. The final score: 15-2. More than 400,000 people have watched the match on YouTube.

Mir is one of them.

Those presuming that Mir has revenge on his mind at UFC 130 should think again.

“It’s a match; it’s not the first jiu-jitsu match I’ve lost,” the 260-pounder said with a chuckle.

Aside from the non-existent revenge motive, the long-awaited “rematch” has been robbed of other potentially sexy storylines. Both Mir and Nelson were born and raised in Las Vegas, but neither has publicly expressed the slightest hint of a rivalry or regard for local “bragging rights.” In fact, both men trained several times with each other and are extremely cordial with each other – even exchanging some friendly tweets in the weeks leading up to their showdown. Yet their clash is also not a true case of Friend versus Friend.

“I’ve never been to his house and I’ve never been to dinner with Roy,” Mir said. “But if we see each other at the gym or on the street we’re very cordial and I get along with him. He’s a gym buddy, that’s a better definition.”

So then why did Mir and Nelson, both Brazilian jiu-jitsu black belts, train so seldom with each other? Was it because they eventually envisioned they might someday meet in the cage?

“I think we just have different approaches to training,” Mir said. “I don’t think Roy brings a lot of people around. He still does his own thing. Roy has his own views on how things should be done, his own outlook on things.”

Mir (14-5) doesn’t believe his past training sessions with Nelson (16-5) give him any special insights into The Ultimate Fighter season 10 winner’s stylistic tendencies, and vice-versa.

“No, Roy’s pretty simple,” Mir said. “He’s had about twenty fights and he hasn’t done anything drastically different. I don’t think that all of a sudden in this fight he’s going to come out like Dominick Cruz.

“Roy possesses a good skill set. One thing Roy does well is he doesn’t take chances -- he likes to capitalize on his opponents’ mistakes. It’s not like he’s going to do any high-risk throws or anything, unless he’s hurt. For the most part he’s very efficient.”

Quite simply, Big Country comes to knock opponents out. Period. All but one of the robust heavyweight’s past eight wins have come by concussing foes. Nelson last submitted an opponent in 2006. If things are settled on the feet, Mir is confident he can do what Dos Santos could not. He recently asserted to reporters, ‘I hit harder than Dos Santos.’

Mir expounded on the rationale behind his attention-getting claim, mindful that some consider Dos Santos and Shane Carwin to be arguably the two hardest hitters in the UFC heavyweight division.

“The reason I said it is … the overhand left I landed on (Antonio Rodrigo) Nogueira … I’m the first person to ever drop him and I dropped him four times in seven minutes,” Mir said. “I don’t think Cheick Kongo has ever been dropped and when I hit him with the overhand left, I not only knocked him down, but if you watch I actually made him leave his feet and threw him across the cage. Dos Santos, you know, he put a beating on Mirko (Cro Cop) but he didn’t knock him out, Mirko kind of waved it off (Cro Cop suffered a fractured orbital bone and submitted due to the injury in the third round). I knocked out Mirko, so we have common opponents that can be related.

“It’s just that power is size times speed, and I am pretty quick and I also have a little more weight than he (Dos Santos) does.”

Mir’s win over Cro Cop was marked by tentativeness, a trait that robbed him of the jubilation that usually comes with defeating a legend. What disappointed Mir most wasn’t simply his conservatism – he conceded he was always wary of Cro Cop’s devastating left high kick – it was the takedown opportunities he let slip away.

“In the Mirko fight you saw me striking and then thinking, ‘Oh, let me try a shot right now,’” said Mir, who won a Nevada state wrestling championship in high school. “It wasn’t smooth off my hand combinations or my opponent exposed his leg, ‘I’ll change levels and shoot.’ That’s what pissed me off the most. Wrestling’s a weakness of mine so I want to work at it all the time. I want to get better at it. Getting takedowns and top position is a dominant strategy. Not that I need the takedowns but I don’t want to be in a position where the takedown is there, after a combination, and I don’t do it because I’m inadequate at it.”

A first-rate finisher – Mir has ended an astounding eight UFC bouts in the first round – he realizes he could be that much more formidable with reliable takedowns.

“Oh, yeah, I have a lot more submissions from the top than I do from bottom; I think everybody does,” he said. “I’m a lot more dangerous on top because now you’re carrying my weight and worrying about strikes and submissions. I’d prefer to be on top.”

One of the hallmarks of Frank Mir’s aura leading up to his fights is that he is as remarkably cool and calm as they come. He shared the secret to being so composed: He doesn’t have a fear of losing. Losses, like the grappling match to Nelson years ago and a knockout loss to Shane Carwin last year, do not haunt him in the least bit, as they might other fighters.

“You know what, maybe that’s why I stay so even keel,” Mir said. “I get more mad about things that happen in a fight than the outcome of the fights. If a guy tells me that losses bother him then that tells me that in the locker room, before the fight, he’s thinking about winning and losing. If you’re worried about the outcome then you’re not worried about how to get there. So I only worry about all of the steps in-between – the start of the fight until the end of the fight. That’s how my mind is. Maybe some people take that as me being less competitive than other people, but that’s how I think about it. I have won matches and been pissed off as all hell, and I have lost matches and been kind of happy about it afterwards because I was able to do this, this and this … and I lost because this guy was better than me in a certain aspect.”

As an example, Mir pointed to a tiny but tragic mistake he committed in his fight against Carwin.

“My wrestling against the cage, my head position, was so poor that he had head dominance on me and that was the one aspect that he beat me at,” Mir said. “Then all of the sudden he let off, threw an uppercut and stunned me and finished the fight. Out in the open, I tagged him, he moved backwards … I felt comfortable there. So I’m not mad that I lost, but that I lost the head position.

“I went to the gym, and I don’t let the loss eat at me. It’s: This position against the cage I sucked at, what did I do wrong? It was head position, so OK, let’s work on that. I focus on that. That’s what’s going to make me better, not dwelling on the loss.”

Though he’s not worried about losing to Nelson, Mir conceded that a victory might not win him as much credit as he would like.

“I think it’s one of those things where there is more to lose than more to gain,” Mir said. “The thing that kind of sucks about fighting Roy is that if Roy wins, he’s going to look good. If he loses, then it’s just going to reaffirm people’s opinion of him, ‘Ah, see, there’s the fat guy who doesn’t take it seriously.’ So I’m kind of stuck in a situation where if I lose it will be really, really bad. I think I’ll have to win pretty devastatingly to increase my chances (of impressing people). But Roy is not an easy guy to have a devastating win over. I want to win and keep myself in the running for bigger things.”