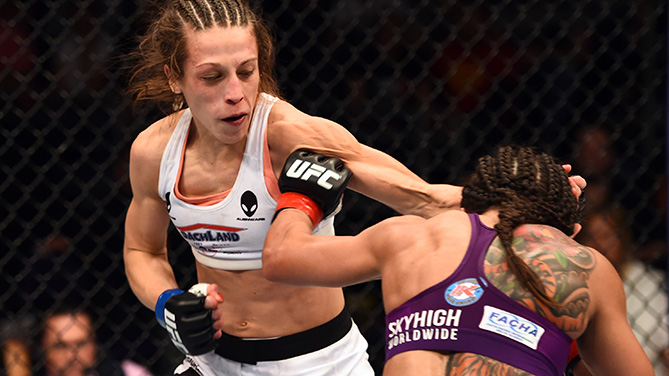 In a grueling and exciting clash of unbeaten strawweights, Poland’s Joanna Jedrzejczyk made her case for a shot at newly-crowned champion Carla Esparza, taking a closely-contested three-round split decision over highly-touted Claudia Gadelha in UFC Fight Night prelim action at US Airways Center in Phoenix, Arizona.

Both fighters had success on the feet to kick the bout off, and then it was time for Gadelha to close the distance and clinch up. With 3:13 left, Gadelha got the bout to the mat and after a few strikes she looked for an arm triangle choke. Jedrzejczyk was able to force her way free and back to her feet, but Gadelha kept her locked up against the fence. Eventually, Jedrzejczyk got loose, and with seconds remaining, she dropped the Brazilian with a hard right uppercut.

I am PUMPED for this fight! If you haven't seen @joannajedrzejczyk fight yet then put @foxsports1 on NOW!! @claudiagadelhaufc #UFConFOX
A photo posted by Dana White (@danawhiteufc) on Dec 12, 2014 at 4:27pm PST

Getting the bout to the mat early in round two, Gadelha wanted to control matters in the grappling range and avoid exchanges with her opponent. Jedrzejczyk reversed position on Gadelha though, breaking loose and resuming her stand-up attack on her tiring foe. With a little over a minute left though, Gadelha got the takedown, adding important points to her scoring tally.

After an early third round exchange, the two clashed heads, Gadelha taking the worst of it with a cut over the left eye. After getting cleared by the Octagonside physician, the two got right back at it, Jedrzejczyk landing some hard shots before getting taken down by a fired up Gadelha. Jedrzejczyk would start to get up several times, but Gadelha kept putting her back down. With two minutes remaining, Jedrzejczyk rose, but she wasn’t able to escape the grip of the Brazilian until the final 30 seconds, and though it appeared that it was too late for a miracle comeback by the Poland native, the judges felt she had done enough to win.

Unfortunately, the last impression of the three-rounder was a punch by Gadelha after the final horn sounded, but Jedrzejczyk was gracious after the decision was announced, still proclaiming her opponent “as number one.” 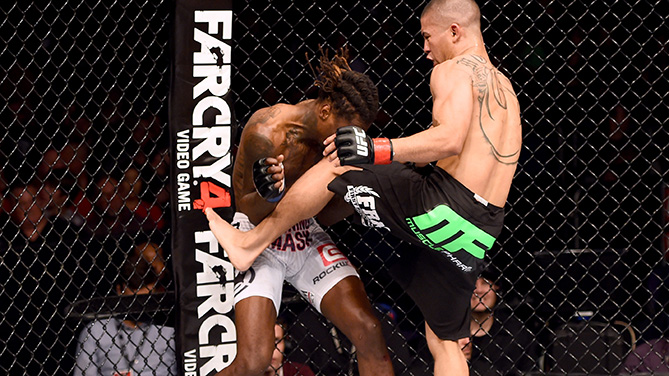 Flyweight contender John Moraga took a while to figure out newcomer Willie Gates, but once he did, he closed the show, submitting the late notice replacement in the third round.

Moraga ate a few illegal kicks in the early going, but after the third one by Gates, it almost cost him, as he turned away and expected a break from referee Jason Herzog. Instead, Herzog waved the two fighters in and Gates caught Moraga napping with a right hand to the head. Moraga hit the deck and almost got stuck in a rear naked choke, but the hometown favorite got out of trouble and into the top position before rising to his feet and finishing the round strong with leg kicks.

The former world title challenger began to impose his will in the second round, controlling the pace from long range and in the clinch, and in the third, Moraga put his foot on the gas, taking the bout to the mat and then finishing it via rear naked choke at the 4:06 mark.

With the win, Moraga improves to 16-3; Gates, who replaced the injured Jussier Formiga, falls to 11-5.

Exactly eight years after his last UFC appearance, welterweight veteran Joe Riggs was the victim of some bad luck in his return, as a slam of Ben Saunders injured him upon impact, forcing a tap and a victory for Florida’s “Killer B.”

A frantic exchange against the fence early in the fight led to some hard knees from Saunders and a slam by Riggs. As the two hit the deck though, Riggs winced in pain from a neck injury. Saunders moved for a submission, but before he could lock it in, Riggs tapped out at the 57-second mark due to injury. 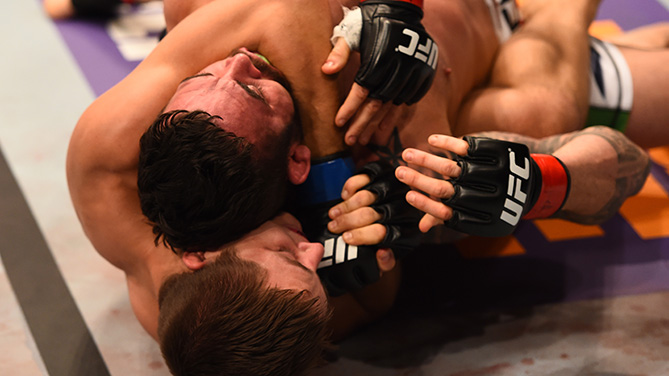 The third time was the charm for Omaha lightweight prospect Drew Dober, as he earned his first UFC victory in three tries at the expense of Arizona veteran Jamie Varner, submitting the former WEC champ in the first round.

A Varner takedown in the second minute didn’t turn out well, as the former WEC champ got rocked when he hit the deck and Dober landed on top in the mount position. Varner tried to turn in an effort to get free, but he turned right into a rear naked choke attempt by Dober that forced a tap at 1:52 of the round. 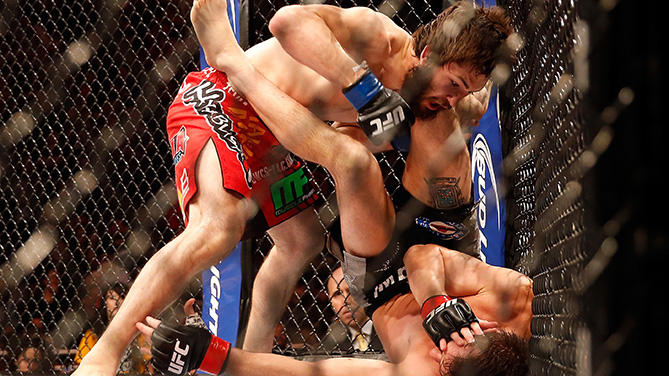 Hometown favorite Bryan Barberena promised fireworks in his UFC debut against Joe Ellenberger, and the Glendale product lived up to that promise, halting the Omaha veteran in the third round of their lightweight bout.

After a slow start by both fighters, Ellenberger dumped Barberena on the mat in the second minute of the fight, but the Arizonan got back to his feet fairly quickly. Moments later, a hard right by Ellenberger rocked his foe, marking the best shot of the round.

A fight broke out in the second, with Barberena (10-2) starting to let his strikes go effectively as he got Ellenberger’s attention. The Nebraskan mainly laid back and tried to counterstrike, and though he got some strikes in, Barberena’s aggression put him in the lead.

Ellenberger (15-2) got back on the board with a takedown to start the third. Barberena rose quickly and got off some elbows against the fence, and soon after he rocked and dropped Ellenberger with a series of shots. Ellenberger tried to work a submission from his back, but Barberena was relentless with his ground strikes, forcing referee Herb Dean to halt the fight at the 3:24 mark.