A Title Shot Looming, Diaz Deals with the Mission at Hand

"You don’t usually go into a fight with a plan to do jiu-jitsu on
somebody or just box somebody. You have to be ready for whatever they’re
gonna throw at you." - Nate Diaz 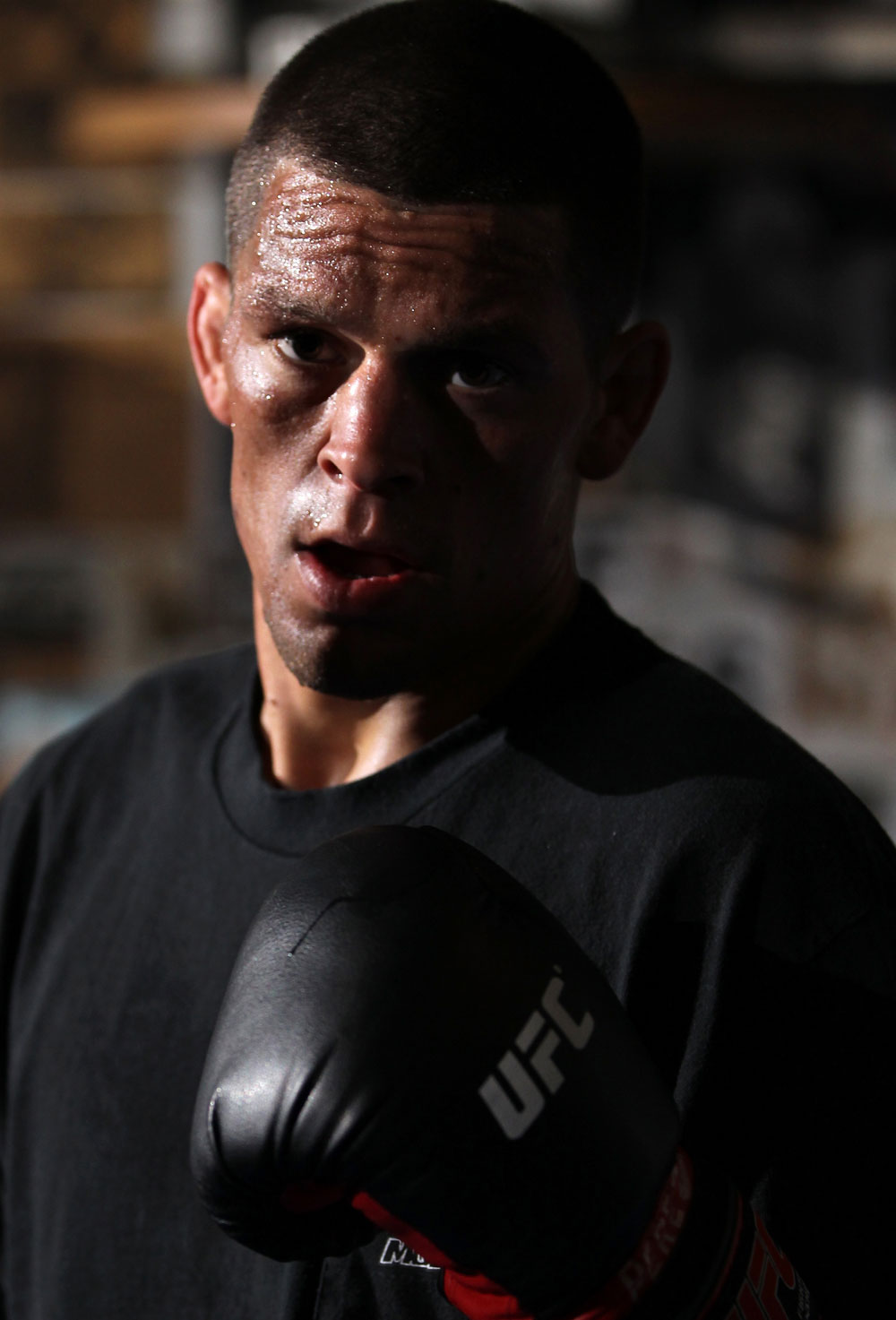 If you want a glimpse into who Nate Diaz is, just ask him what he thinks life after winning a UFC championship would be like. There’s no talk of a nicer car or house, of money, or even of being considered the best lightweight on the planet.

His first, and only, priority are the people that have helped him along the way.

“I got friends and family that need to be taken care of, so that’s what I’m working on,” Diaz told UFC.com. “I’ve got guys out here that I’ve been trying to get their names out, and I’ve got training partners that have talent, and I think if I had some more ears listening, I can get them out there.”

He reels off some names, forgetting some, but not maliciously. As he notes Lucas Gamaza, Daniel Roberts, Rudy Hernandez, Jonny Carson, the El Nino Training Center, the Cesar Gracie Fight Team, and Damian and Tarzan Douglas, he stops only to say, “I could list people for days.”

For him, this is more important than talking about himself. The way he sees the world, fighting is what he does for a living, but it’s the time spent in the gym with his training partners, who are not just friends, but virtually family, that’s most important. So when he was awarded his Jiu-Jitsu black belt from Cesar Gracie in April, it was a big deal, to say the least.

“I started training when I was about 15 years old,” he said. “So it means a lot and I feel like I’ve been working for it for a long time. When I started, I knew that was one of the goals because I was watching Royce Gracie, my coach Cesar, and Dave Terrell and all these badasses do their thing. So I knew I had something I was aiming for. It would have helped if I wasn’t fighting to maybe get it a little sooner because I had a lot of stuff to cover in the meantime. There were a lot of guys that I was competing with in the blue belt division and purple belt division who went on and got black belts a couple years ago. But all the time they were on the mat, a lot of time I was on the mat and also in the ring sparring and kickboxing and wrestling and doing all kinds of other stuff. I would teach classes when I could, but it’s kinda hard to teach when you’ve got fights and stuff. So I had some obstacles, but I’m glad I finally did it.”

If you’ve followed the fight game for any length of time, one thing is clear – Gracie doesn’t hand out black belts haphazardly or as a reward for showing up. Diaz is only the fourth member of the Cesar Gracie Fight Team to earn the coveted honor (Diaz’ brother Nick, Jake Shields, and David Terrell are the others), and even though the youngest member of that group has impressed fight fans with his standup attack, he has not neglected the gentle art on his way up the MMA ladder.

“Jiu-Jitsu’s a big part of my game, and it’s a big part of everybody’s game because if you don’t know it, you’re gonna sink in this,” said Diaz. “You’ve got to cover every angle as much as you can, so it’s definitely a big part. I do jiu-jitsu every day and as soon as the fight gets a little closer, I don’t put on my gi as much, but as soon as the fight’s over, I’m usually right back in my gi. I gotta learn the best I can and be the best martial artist I can be.”

But it is the unorthodox yet brutally effective striking attack of Diaz that has been the catalyst for his resurgence at 155 pounds after a 2-2 stint at welterweight that saw him finish Rory Markham and Marcus Davis, only to drop two decisions to Dong Hyun Kim and Rory MacDonald. Diaz insists that we may not have heard the last of him among the 170-pounders.

“The thing with 170, I didn’t even want to fight Rory MacDonald or Dong Hyun Kim because no one knew who they were,” he said. “I felt they kinda built a name off me. I was just fighting Melvin Guillard and Clay Guida at 155 and now I go up to 170 and they’re sticking me all these hard fights with no names. So it’s kinda lose-lose for me and win-win for them. Not to put myself on a high horse, but I’m losing to Dong Hyun Kim and Rory MacDonald and it was kind of irritating. I didn’t specifically say I was going back to ’55; I told my manager I would fight at ’55 or ’70, whatever the bigger fight I could get. I would rather fight Takanori Gomi than Joe Blow at 170. I’ll still fight at 170. It would seem like I got washed out of that division, but I don’t think so. Both of those guys didn’t do much to me.”

But once he fought Gomi and Donald Cerrone back at 155, the difference was night and day. He dominated the former PRIDE champion on the feet before submitting him late in the first round, and he snapped Cerrone’s six fight winning streak with a three round standup clinic that you don’t see too often from soon to be jiu-jitsu black belts. Yet as far as Diaz is concerned, this didn’t happen by design; he just dealt with what was given to him on fight night.

“It’s hard work and you’ve got to do a lot of jiu-jitsu and a lot of boxing,” he said of his training life. “Sometimes you might do more of one than the other or not done enough of one, but you need to make sure you cover it all. You don’t usually go into a fight with a plan to do jiu-jitsu on somebody or just box somebody. You have to be ready for whatever they’re gonna throw at you.”

And as Gracie covers the ground game, Richard Perez has done great work with both Diaz brothers on their boxing, and they’ve also had help from some folks in high places, like current super middleweight boxing champion Andre Ward.

“I sparred with him a couple times and I sparred with a lot of his partners at his gym,” said Diaz of Ward. “He’s definitely the best boxer in this area and I think he’s the best boxer in the world, pound for pound, right now, so it was good to just be in the same environment with him and in the same gym as him and Nick working together. I picked up a lot of stuff, and I worked with all his coaches’ guys too; it’s good work over there.”

So for all the preconceived notions of Diaz and his brother of just being mean mugging brawlers from the “mean streets” of Stockton, California, it’s clear that it’s the art of fighting and the work that goes into it that matters most. In a lot of ways, Diaz is almost a mirror image of his opponent this Saturday in the main event of UFC on FOX 3, Jim Miller. Neither go chasing down cameras or interviews, preferring to let their fighting do the talking. And when you ask Diaz about his foe, the respect is obvious.

“He’s tough everywhere,” he said. “I’ve seen the guys he works out with and he’s got a black belt in jiu-jitsu and decent standup and he’s a good wrestler, so he’s definitely a well-rounded fighter, and it’s gonna be a tough fight.”

Plus, it’s going to be held in Miller’s New Jersey backyard. For some, that could be an issue. For Diaz, it’s another night in the lion’s den, and he’s just fine with it.

“I’m always behind enemy lines,” he said. “I’m not worried about it. There might be some booing, but whatever, that’s the name of the game. I’ll fight anywhere. But I would definitely rather be at home, for sure.”

Which begs the question, could Nate and Nick Diaz have become who they are today anywhere but the 209 area code they rep proudly? Would a Palm Springs or Hollywood upbringing have given them the drive to succeed or the chip on the shoulder to believe they could conquer the world? Diaz pauses to ponder the question.

“I don’t know,” he said. “I think we live in the best state and the best country in the world, so I think we’re pretty fortunate about that. We can drive to southern California or drive to the bay area and we’ve got everything right here. I think people are pretty real out here. It’s not hard to recognize some fake stuff when I leave town.”

Not a surprising answer from a real fighter, one whose life could change significantly on Saturday night should he beat Miller and earn a shot at the UFC lightweight title. But none of that is on the radar at the moment.

“I’m just concentrating on this fight. There’s a lot of hype, a lot of talk, and that (getting a title shot with a win) is what I’ve heard, but first things first, and I’ve got to fight Miller. I’m dealing with the mission at hand right now.”