Title in Hand, the Tough Part Begins for Dos Santos

"I know I have a target on my back, but that's good." - Junior dos Santos 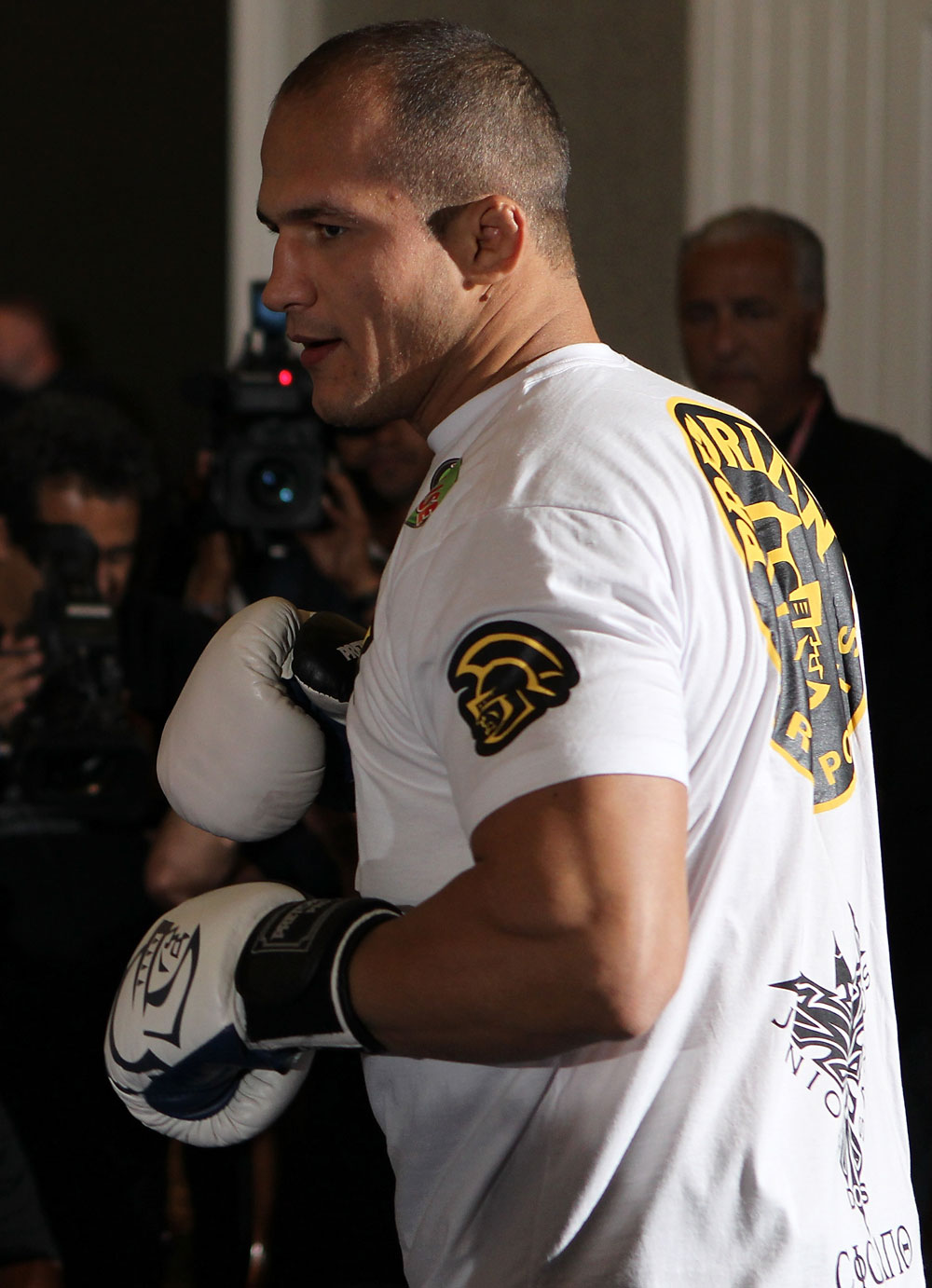 We’ve been down this road before. A young and exciting champion ascends to the pinnacle of his sport, and the celebration of what is expected to be a long reign begins.

Then it doesn’t. The reign ends with the landing of a fist and a crash to the canvas, and then the search begins again. The latest person to receive this harsh dose of life in the fight game was Cain Velasquez. And the one now being celebrated as the next great heavyweight is the man who beat him for the UFC title, Junior dos Santos.

Dos Santos, who defends his crown for the first time Saturday night in the UFC 146 main event against former two-time champ Frank Mir, fits the mold of the unstoppable young gun. He can end a fight with a single swing of his fist. If that doesn’t happen, he can punish you until the bell or the referee intervenes. He can make you fight his fight, and he will even tease the fans a bit when he decides to fight his opponent’s fight. He has the athleticism we expect from our sporting heroes. And most importantly, he hasn’t shown any weaknesses yet, with the closest we’ve seen yet being a brief look of frustration when his flush power shots didn’t knock Roy Nelson out in August of 2010. It bears noting that he still won that fight via shutout unanimous decision.

But now everything has changed. The hunter is now the hunted, and everyone in the heavyweight division is studying him, looking for the most minor tell that would lead to a reign-ending mistake. Mention that to “Cigano,” and he doesn’t look disturbed in the slightest; there’s only the smile that has become his trademark.

“I like it here,” said dos Santos through manager / translator Ana Claudia Guedes. “I know I have a target on my back, but that's good. I want to be constantly improving as a fighter, and knowing I have to fight to stay here at the top only motivates me more.”

And if you think dos Santos’ 64 second knockout of Velasquez last November earned him a nice long break or some special treatment from longtime trainer Luiz Dorea, come on, you know that’s not the case.

“Absolutely I'm still learning,” said dos Santos. “My coach Dorea always says that when a fighter begins to think he has nothing left to learn, that's the beginning of his end. I am always trying to learn more, to learn different techniques and to improve my game.”

And not to jinx the 28-year old from Salvador, Bahia, Brazil, but he really doesn’t seem to be the type to let his instant notoriety go to his head, though he does admit that things are a bit different from November 11th to November 13th.

“What's changed the most for me has been recognition from fans,” he said. “I am recognized and stopped by people in public a lot more now. And I have a lot more obligations with and interest from the press. Other than that, not much has changed.”

That’s believable, and if you’re one of those cynical types, rest assured that the dos Santos you see when the cameras are on is the same one you get when they’re off. He’s just a well-adjusted, smiling young man who is generous with his time and grateful to be in the position he’s worked so hard to reach. Of course, you could say the same thing for the man he beat for the belt, Velasquez, but it’s always been evident that while the Californian is a professional who does whatever is asked of him when it comes to his outside the ring obligations, he’s not nearly as comfortable with it as dos Santos. Could you picture Velasquez singing Adele songs on TMZ? Me neither. And if anything, dos Santos seems to gain energy from the admiration of his fans.

“I think what I have from my fans is a reflection of what I put out there,” he said. “I believe in treating people well, and I like being nice. It's great to feel that admiration, and to feel that so many people care about and look up to me, I really appreciate it.”

With that out of the way, there’s still a fight to worry about on Saturday night, and to get to Las Vegas, dos Santos had to experience the bane of a fighter’s existence – the opponent switch. With original opponent Alistair Overeem not getting licensed by the Nevada State Athletic Commission, Mir was elevated into the top spot alongside the champion, a turn of events that didn’t seem to faze the Brazilian too much.

“No, I wasn’t let down (by the switch),” said dos Santos. “I don't choose my opponents. I had to tweak a few things, especially given the big stylistic difference between Overeem and Mir - one is a striker, the other a submission specialist; one is right-handed, the other is a southpaw. But we were able to have a really good training camp despite the opponent switch, and I am ready for Saturday night.”

And despite the disappointment of not seeing what was going to likely be a bombs away slugfest with Overeem that didn’t promise to get out of the first round, the histories of dos Santos and Mir lead to a conclusion that might be just as fast and explosive, though this time it may be dos Santos via knockout or Mir by submission.

“Mir is very dangerous,” said dos Santos. “He's a smart guy and a smart fighter. If he sees an opening or a mistake in your game, he is quick to capitalize on it. So you have to stay very focused and precise against a guy like him.”

Mir also has to know that this could be his last shot at championship gold, and that all he needs is a split second to make a dos Santos mistake a fight ending one. No one knows this better than the champion, who saw his mentor, Minotauro Nogueira, appear to be seconds away from stopping Mir via strikes when the Las Vegan turned the tables and submitted the former PRIDE and UFC champ. Asked if Nogueira has given him any pointers on fighting Mir, since the two have met twice, dos Santos’ response is pithy.

“He always gives me advice, and with Mir it was no different.”

If revenge for his mentor is a motive, dos Santos isn’t letting on about it, and that’s fine. The saying is that’s a dish best served cold, and getting worked up about it isn’t going to make the task any easier. So for now, dos Santos’ goal is a simpler one, though even more difficult to achieve. He wants to keep that belt longer than anybody else.

“I think my biggest motivation is just that I love being who I am,” he said. “I love being the champion, and I want to remain champion for a long time, so I always give my best. Wanting to stay on top just motivates me and keeps me focused on my training.”