“I won't feel like a UFC fighter until I start getting wins in the UFC.” – Tim Gorman 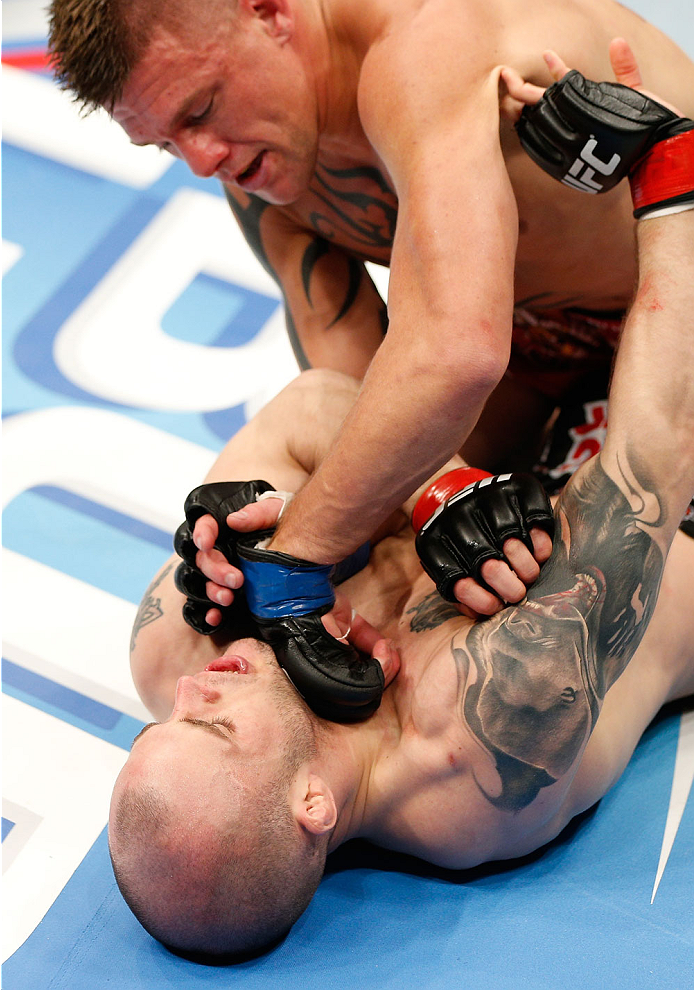 For the wrestler and TUF 18 alum from Iowa, this second appearance in the UFC might have never come to be, after suffering a gruesome hamstring injury just one week before his fight to get into the TUF house, nearly derailing his UFC career in the process.

“There was a time I was really depressed and bummed out about it, but it was only a week before the TUF, so I didn't have too much time to dwell on it,” Gorman said. “After it happened I went out and bought pancake mix and made myself a bunch of pancakes.  But then the next day I realized I've been practicing for ten years and this is my chance to get into the UFC, so I was like, ‘F it let's do the damn thing.’ And I ended up winning.

After nearly one year in rehab, Gorman faced tough Canadian Mitch Gagnon, and even though he dropped a unanimous decision to the submission specialist, he does take some comfort in being Gagnon’s only UFC opponent to take him the distance.

“It makes me feel a little bit better after the match but honestly it was rough taking the loss and to see him move up the ranks,” he said. “It does make me feel better knowing that I can compete at that level, but I was disappointed that I lost.”

Gorman said he had re-injured his hamstring during his camp and had to take a month off of training for that fight, but is reluctant to talk about it or even factor that in to his loss.

“Gagnon was the better fighter that night and he beat me fair and square,” he said. “In this sport there is no room for excuses, so you just have to suck it up and go out there and fight. I feel like there are no excuses in this game. You can get your leg bit off by a shark and people will still act like you’re making excuses. So you just have to go out there and bang it out no matter what. I don't think there's ever a fighter who is fighting in the UFC who is 100% on fight night.”

In Almeida, Gorman faces yet another tough opponent. With 17 victories, 13 coming by way of KO or TKO, and four coming via submission, “Thominhas” has finished every single fighter he’s ever faced, most of them in round one. The challenge isn’t lost on Gorman.

“Making it into the UFC you're going to fight the best fighters in the world,” he said. “Almeida is undefeated, and just because he's making his UFC debut doesn't mean he's not a great fighter, or even a top prospect, so I'm going in there to fight my fight, and I'm going in there to get my first UFC win. That's the only thing I'm thinking about.”

Almeida is an excellent striker, but Gorman believes the style of fighting he’s faced was mostly made up of guys who aren’t complete mixed martial artists. Not the way he is, anyway.

“He's a striker for sure and he's really good at takedown defense,” Gorman says. “But I feel like he hasn't fought anybody like me yet, so it will be pretty interesting to see how he handles it. I'm a good wrestler, not that my game plan is to take him down because I feel like I can beat him on the feet, but from what I've studied he hasn't fought anyone with the style of fighting that I have. I am going to have him guessing all the time and when you have a guy worried about throwing kicks because of takedowns or shooting in because of knees to the face, eventually you'll take him out of his comfort zone and then you can control the fight. That's a good day at the office if you ask me.”

A good day at the office is something Gorman is anxiously looking forward to. In this day and age, he understands there’s more to making it in the UFC than simply fighting, but he also knows that until he starts getting wins on the world’s biggest stage for fighting, he’s going to have to keep his head down.

“I want to get some wins, I want to be a perennial top ten contender, and then eventually I want to be champion. I won't feel like a UFC fighter until I start getting wins in the UFC,” he said. “I don't really follow the media or other fighters in the media, but number one is to take care of yourself, training hard and winning fights. It doesn't matter if you talk big or dress big if you're not winning fights. Now the guys who do it, like Conor McGregor and Ronda Rousey, yeah, they've backed up their talk and it's worked well for them. Even (Chael) Sonnen won the fights that kept getting him to the title fights at middleweight, and even though he fell short in his title quest, he still earned those shots. But right now, like I said, I've got no business talking, and all business winning.”

And he’s in good company when it comes to the business of winning, training with Team Alpha Male in Sacramento, California.

“I've improved in every aspect of the game - my stand-up, cardio, jiu-jitsu, just everything,” he says. “Training with Urijah Faber, T.J. Dillashaw, Chris Holdsworth, Chad Mendes. There's like 35 of us little guys, mostly 25s to 35s, and we just go out and put the work in every day. (On Saturday) it will be a real honor to be fighting next to these guys, especially Shogun. This is a dream come true.”