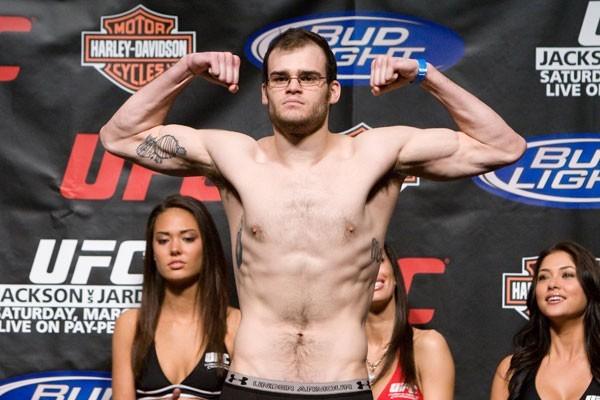 It was the fifth of six fights Tamdan McCrory would have during his first stint in the UFC, and apparently the tipping point for “The Barn Cat” to go from hot prospect to star.

After his first-round TKO of Ryan Madigan at UFC 96 in March of 2009, McCrory thrilled fans around the globe when he blurted out to Joe Rogan during his post-fight interview, “I rode in here on my f****** Thunderhorse and took care of business.”

His comment was a response to not getting to hear Dethlok’s “Thunderhorse” leading him into the Octagon, but it could have described his career to that point. Entering the UFC for the first time as a lanky 20-year-old who would put his glasses on in the cage following his fights, the upstate New Yorker was all fire and raw talent, which meant he won some and lost some, but he was always in there to win a fight. Not a sporting event, but a fight.

And for his next fight, McCrory got his entrance music. He also got a split decision loss to John Howard and soon after, his walking papers. At 22 years old, with a 3-3 record in the UFC, McCrory was unemployed.

“Timing is everything, and unfortunately, it was the wrong time,” he said. “Everybody that was really into the sport back then was shocked that I got dumped. There was an outcry and it went on for four or five days. But I was one of the unfortunate guys that got thinned out.”

Most expected McCrory to win a few fights on the regional circuit and get a call back to the UFC. That didn’t happen. Instead, Tamdan McCrory fell off the MMA map.

In 2015, six years after his last UFC fight against John Howard, life is good for the 29-year-old McCrory. His wife, Haley Burton, is the morning anchor on the No. 1 news channel in Binghamton, New York, and the couple has a three-year-old daughter, Keelin.

It’s a quiet life, and one that the former Thunderhorse-riding McCrory prefers.

“I'm a private person,” he said. “The only reason why people know anything about me in town is because I was on the front page of the newspaper one day. I've got a gym that I teach at in town, and people don't come in and say 'hey, that's Tamdan McCrory.' They go 'you actually fought before?'”

Imagine that, indeed. It’s what happens when you’ve been off most people’s radar for a few months, let alone a few years, and it wasn’t McCrory’s intention to leave MMA behind after being released from the UFC. There was a plan. A little break, a move from welterweight to middleweight, and then get back at it.

It didn’t happen that way. But as he wants to make clear, his absence from active duty for five years wasn’t a retirement.

“I never said I was retired,” McCrory explains. “It was just one of those things where I took some time off, and momentum's a bitch and when you don't have it, it's hard to build it. I was fielding some offers that were still at 170, and there was no way that I was going back down to 170 again. I made a commitment that I was going to go up in weight and I didn't just want to jump up a weight class and start fighting anybody. I wanted to do it right - get bigger, get healthy - and then life takes you in a different path. I got distracted and involved in things that took away my time, my health and my finances, and when that happened, it was just like...”

“The idea was always that I was going to be back. The goal was always to be back where I am now. It just took me a lot longer than I had originally intended it to.”

Even when he wasn’t fighting, people always asked what was going on with Tamdan McCrory. He had the “it” factor when competing in the UFC, and for none of the usual reasons. He wasn’t sculpted out of marble, he didn’t have Hollywood looks, and he wasn’t knocking people out in 30 seconds every time he fought.

So what was it? Maybe it was that raw talent, his desire to always go for the finish, or the fact that the nerdy-looking kid from high school was getting his revenge on the world through fighting.

Maybe more accurately, it was the reality that none of what McCrory did was manufactured. It was real, and he didn’t seem bothered in the least by being himself on the sport’s biggest stage.

“I fought in smaller shows, I fought in medium-sized shows, I had been a headliner, so it (fighting in the UFC) meant the crowd gets a little bit bigger,” he said. “When I was younger, I probably felt more nerves than I do now, but it's been years for it to process. When you go from being 19 years old when you first start fighting to then being 20 years old and you're fighting in the UFC, there's not a lot of time to process that mentally. But I felt like I should be there and I knew that's where I wanted to be. So it wasn't a shock to me that I was fighting there.”

That confidence was built in an unlikely way.

“My freshman year of high school wrestling, I won one match the entire year,” he said. “Now most kids in a man-on-man sport like that would say 'I'm a bitch' and quit.”

McCrory didn’t quit, and the next year he got better. Slightly.

“Second year I was 8-18. Now you look at someone who had that type of record wrestling, you'd say 'why didn't this kid quit?'”

So why didn’t he?

“I worked hard for not a lot of results, and I still did it,” McCrory said. “I still worked hard. I outworked everybody on my team. People say 'oh, you're a natural at fighting,' and I say 'I'm a natural at working hard.' I don't have any athletes in my family. I'm just a hard worker, and by that alone, I made it to where I am today. Just being able to get s**t on, kicked when you're down and still turning over and coming back and getting up on your feet and moving forward, that's the story of my life.”

He would need that attitude to get back into the world of mixed martial arts, and by 2012, he realized that he wanted to be a fighter again.

“It's the one thing that I should have been doing, and I shouldn't have gotten distracted from it,” McCrory said. “I hit a time when things weren't good and I said the one time when my life was good was when I was fighting. I could look at those years and say that in spite of the ups and downs, that was when I was most happy. So I'm gonna go back to that.”

Then he got in a car accident in early 2013 and the injuries he suffered after being rear-ended required surgery.

In September of 2014, McCrory returned to active duty in the Bellator promotion, knocking out Brennan Ward in just 21 seconds. Five months later, he dispatched Jason Butcher via submission in 66 ticks of the clock.

The Barn Cat was back.

The UFC landscape has changed quite considerably since Tamdan McCrory last stepped into the Octagon, and he knows it.

“I'm legit old school,” he laughs. “I fought on Ultimate Fight Night 10. How many of those things have happened since then? We’re almost into UFC 200. I fought at UFC 78. If you weren't even in there before 100, don't even talk to me.”

It’s the sound of a veteran talking – if not in fighting, than at least in life. After his win over Butcher, McCrory clashed with the Bellator brass, and was granted his release. A few days later, he was back in the UFC, with his first bout taking place this Saturday against Josh Samman.

“I proved my point, I did it, here I am, and now the next point to make is to win this fight and take it one fight at a time and keep moving forward,” he said.

Like he said, to get back here six years later is a victory in itself, but he doesn’t want it to be the last one. And while the hardcores eagerly await his return, a new generation of UFC fans will see him as the new guy, which is fine with him.

“It's definitely an opportunity for me to regain some of my former glory, but to also rebrand myself in the eyes of the newer generation that are tuning in now,” he said. “People are going to look at me as the new guy, but I've still got to prove myself whether they remember me or not.”

That’s a road Tamdan McCrory has never had a problem taking, Thunderhorse or not.

“It's 15 minutes,” he said. “15 minutes of your life and you're just gonna go in there and figure it out. I could get worked up, think a thousand different scenarios in my head, I can train for 20 million different opportunities that could arise in the middle of a fight, but none of that matters. Nothing that you do prior to that night of fighting matters, because you're a performer. Your job is to get out there and perform, no matter what the obstacles or the things against you prior were. For those 15 minutes, you are to perform at your best.”