The Time is Right for Glover Teixeira 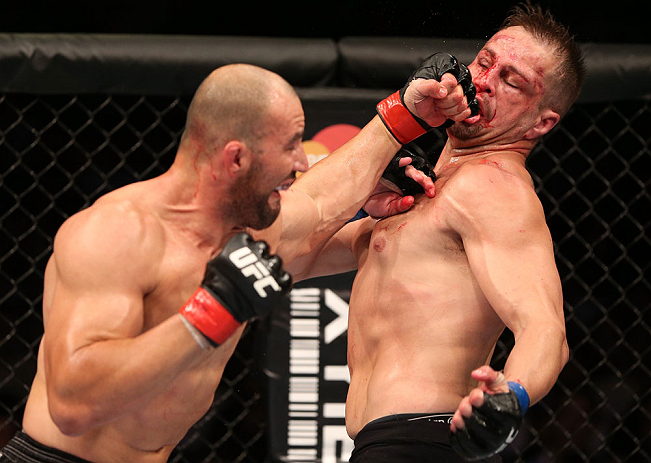 The beauty of Chuck Liddell’s Hall of Fame career was that there was no nonsense surrounding it. “The Iceman” whittled everything down to the basics, and when he fought, it was to knock people out. Plain and simple. So when the Brazilian fighter he mentored for years, Glover Teixeira, wondered when green card issues would be rectified, allowing him to compete with the best light heavyweights in the world in the UFC, Liddell had some sage wisdom for him.

“Chuck told me once ‘you just gotta fight. Don’t worry about messing up the record because if you can’t beat somebody here, it’s because you don’t deserve to be there anyway. So keep fighting,’” recalled Teixeira, whose response in word and deed was just as Iceman-like.

“So I kept fighting,” he said. “If I wasn’t injured, I’d fight, and I knew sooner or later it was gonna happen.”

In 2012, it happened. The Brazilian Jiu-Jitsu black belt with the knockout power in his hands and the granite in his chin cleared up his immigration issues and was immediately signed to a UFC contract. For hardcore fans, it was a moment they had been waiting for. For casual observers, it was a case of ‘who’s the new guy?’ For Teixeira, it was the culmination of a decade’s work, a span of time in which he rebounded from a 2-2 start to his pro MMA career to win his next 15 bouts, a stretch that included wins over Sokoudjou, Marcio Cruz, Antonio Mendes, Marvin Eastman, and Ricco Rodriguez. And since then, Teixeira hasn’t taken one glance in the rear view mirror.

“I don’t expect too much,” he chuckled, “but being in the UFC and being able to fight the top guys, it’s more than I expected actually.”

It may be more than most observers expected too. In just two fights, emphatic finishes of Kyle Kingsbury and Fabio Maldonado, Teixeira became the breakthrough star of the organization, one who will get the type of exposure all fighters dream of on FOX this Saturday in a co-main event bout against former world champion Quinton “Rampage” Jackson. It’s a big change from where he was just a year ago.

“The recognition is great,” he said, “and people recognize you when you go places. I went to the UFC with Junior dos Santos and I was surprised how many people recognized me, and they keep telling me about the fights. ‘Oh my God, I saw you fight with Maldonado and with Kyle Kingsbury, and I hope you have a good fight with Rampage.’ That was good. But I think it’s the way I fight too; I keep putting on a show, and I think that’s the way I’m gonna get more fans - keep fighting to finish fights.”

In no fight was this attitude more evident than at UFC 153 last October, when he faced countryman Fabio Maldonado. For 10 minutes, save a brief period when Maldonado rocked Teixeira, the Minas Gerais native opened fire on his foe, hitting him with everything but the corner stool. Rightfully celebrated for his toughness, you almost forgot the fact that Teixeira just handed out a one-sided thrashing to an opponent who had survived three round wars with Kingsbury and Igor Pokrajac and also had a perfect 22-0 pro boxing record.

“You always think you’re gonna finish a guy sooner or later and so you keep punching the guy,” said Teixeira. “I was surprised at how tough he was and how much he took, but I went to the fight knowing that he was gonna be hard to put away. Knowing him, he has a past as a tough guy. He’ll put his face out there and get punched. But it’s part of the game fighting in the UFC. The UFC has the best fighters and the toughest guys, so you’re not gonna put everybody away.”

Teixeira won’t stop trying though, a testament to his work under Liddell and the UFC Hall of Famer’s longtime coach John Hackleman, both of whom he still holds in high regard today.

“When I went to train with John and his camp at The Pit, I didn’t know anything, and Chuck taught me pretty much everything,” recalled Teixeira. “I knew jiu-jitsu, and that was my background, but wrestling and striking, Chuck was telling me everything. Plus, I learned from him just looking at the way he was being a champion and being around people and stuff. He was a huge help, and I still look up to him and he comes down and watches me train. It’s a great thing.”

So if Teixeira can gain a little measure of revenge for his mentor by dispatching of Jackson in the final fight of Rampage’s UFC contract, that would probably be a good thing, though you won’t hear that out of his mouth. Instead, he’s let Jackson do the bulk of the talking in the lead-up to the fight, with any fight-related issues leading the Memphis native to complain that he believes Teixeira won’t stand with him in the Windy City this weekend. The Brazilian takes such talk in stride.

“I’m just gonna do my fight,” he said. “He’s saying stuff like that because he wants people to not take him on his weakness. He’s a great wrestler, but his jiu-jitsu, he has had a hard time with it in the past. He’s just gotta work on it. And this is MMA. He said he wanted to do boxing, and that’s a good thing for him I guess. If he wants to do a standup fight, go box with somebody, because this is MMA and people can always do everything. Before it used to be jiu-jitsu versus wrestling, and jiu-jitsu versus striking, but right now it’s everything, so you gotta be ready for everything.”

Glover Teixeira is ready for everything. He has been for years. But despite his long wait to get to the UFC, he believes that at 33, he’s right on time.