With time on his side, Oliveira back to 155

Alex Oliveira laughs when asked if it’s scarier to engage in a night in the Octagon or a night in his previous job as a rodeo bullrider, but he doesn’t hesitate in his response either.

“Bulls,” he exclaims. “I’m not afraid of people after riding bulls.”

That explains a lot about Rio de Janeiro’s “Cowboy,” who is back in the Octagon this Saturday to face Will Brooks. Since his UFC debut in March of 2015, Oliveira has fought six times, winning four. Included has been his share of short-notice bouts, and adding to his fearless nature, he only has one rule for stepping in without a full training camp:

“When short notice opportunities present themselves, it has to be at welterweight.”

So after debuting at 155 pounds against Gilbert Burns, Oliveira has fought four times at 170, defeating KJ Noons, Joe Merritt and James Moontasri, while only losing to Donald Cerrone. It’s been a successful run, but this weekend he’s dropping 15 pounds to face one of his division’s best. Why?

“I feel strong at lightweight, so when I have time to cut, I like fighting at that weight.”
RELATED: Oliveira featured in KO of the Week | Oliveira fighter bio | Matchup with Brooks

He got his time, so he’s back in one of the toughest divisions in the sport, facing someone he describes as “a very technical fighter.” Oliveira may never be described like that, but that’s fine, because he brings something different, yet just as compelling to the Octagon. Simply put, when the gate closes, he fights, and that mindset has endeared him to UFC fans both at home in Brazil and in the United States.

“I love the fans, I love people and I am happy to be among them,” he said, and you get the impression that he is enjoying every minute of this ride. And why not? Just six years ago, Oliveira was riding bulls and not getting paid for the 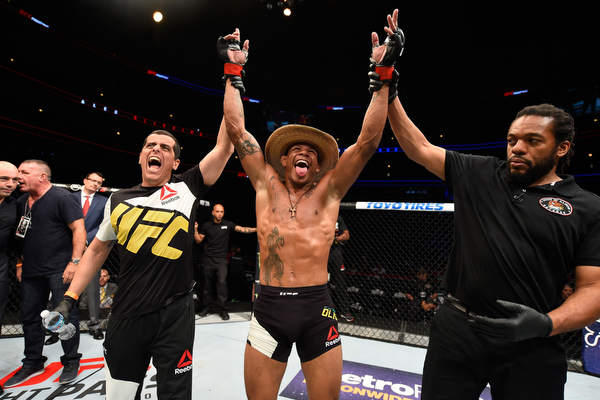 fights he was getting into after hours. But after one of those fights, a spectator invited him to train. He took him up on the offer, though he didn’t know what the future held.

“I just liked to fight,” he said. “I never thought I would get here.”

But he is here, and life has changed considerably for the 28-year-old.

“I have bought my mom a house and can educate my kids now,” Oliveira said proudly of the time since his UFC debut. It’s been quite a couple years, and he knows it.