"Right now I’m shooting for gold. I’ve gotta get this guy Abel Trujillo
out of the way first, and there are a lot of tough guys in this weight
class, so I take everybody serious." - Tim Means 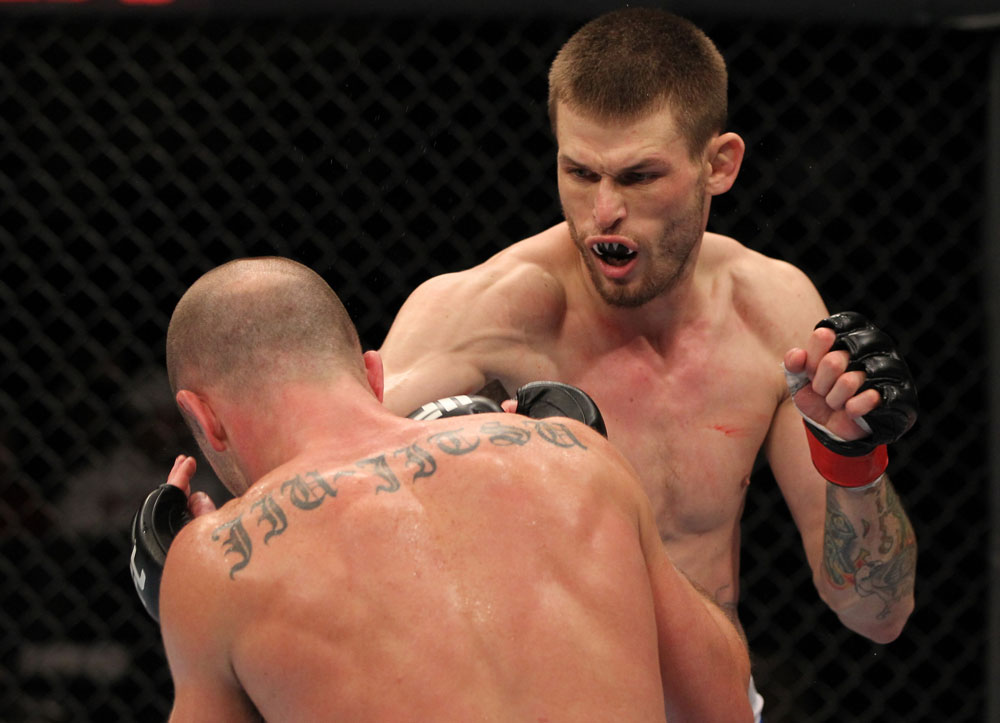 The next time you do one of those “little things” in life, like open your refrigerator when you’re hungry, sit down and put your feet up to watch some television, or just walk outside to grab some fresh air, you may want to think about what freedom means to you.

UFC lightweight Tim Means forgot what all those things meant several years ago, but he never will again.

“I couldn’t open my own refrigerator when I was locked up,” he said. “I couldn’t get up in the middle of the night and get me some orange juice or a bowl of cereal. It’s just small details like that that made me realize that things can be taken away in the blink of an eye.”

A series of misdemeanor drug charges stemming from cocaine and methamphetamine use and a four year prison sentence explain the gap from 2005 to 2009 in his professional MMA career, and also his disappearance from the world. But he isn’t looking for sympathy or trying to excuse his actions. What he does say is that being sent away did change his life forever, and it’s something he won’t forget or shy away from.

“I ran into an older dude that had been locked up since he was 16,” Means recalled. “He’s 87 now, and the man told me ‘if you forget this place, you’ll return.’ And every day I wake up, I think of a state prison, I take a deep breath, and I’m thankful to be where I’m at. And I’ll never forget what that older gentleman had told me. I just won’t forget it.”

Today, Means is a success in every sense of the word. He’s drug-free, engaged to be married, part of a respected MMA team, and making noise in the premier organization in the sport. He even made number five in UFC.com’s unofficial half-year awards for 2012 thanks to his two Octagon victories over Bernardo Magalhaes and Justin Salas.

“I like that word ‘newcomer,’ because I still think I’m learning, and I’m still trying to catch up to everybody, but I think it’s starting to pay off,” said the 28-year-old Means, and while it’s been a good start for a young man with ambitions to one day challenge for the lightweight title, whether that happens or not, it’s safe to say that he’s already won in life. That fact hasn’t dulled him ambition for more though.

“I want to be a champion,” said Means, who returns to action this Saturday to face Abel Trujillo in Seattle. “I’ve had those King of the Cage world titles around my waist and it was an awesome feeling, so to get a UFC world title is everything to me right now. I’m gonna keep pushing, and I think I have another solid five years in the fight game before I might want to step out, but right now I’m shooting for gold. I’ve gotta get this guy Abel Trujillo out of the way first, and there are a lot of tough guys in this weight class, so I take everybody serious, and it’s motivating to me.”

And as the New Mexico product gets motivated by the challenges ahead, he has also taken on the responsibility of motivating young people before they get tempted by the path he once walked.

“Meth’s a big problem in our county, so I go to the schools and talk to elementary school and middle school kids about meth, and I’m not so much drilling them on what they don’t need to do, I just tell them what it did to me and where it took my life immediately,” said Means. “I don’t go talk to children or youngsters saying ‘hey, you gotta straighten this up’ or ‘you need to do this.’ I just tell them about my life and where messing with meth took me immediately. Within a year of messing with that stuff, I was in prison. I wasn’t a thief or nothing like that; I just had a bad temper and I made people afraid of me, including the judge, and I was a nuisance and they made an example out of me, and I’m very thankful for that.”

Once he was released in 2009, rehabilitated and focused on picking up a mixed martial arts career that had only produced a 3-2 pro record to that point (albeit with losses to UFC vets Spencer Fisher and Luke Caudillo), Means went right back to the people who he had trained with since he started at the age of 17, Tom and Arlene Vaughn.

“I came back in 2009, hit it hard with them, and I felt like I started where I left off,” he said. “I’ve just been building on that ever since and it’s just taken off.”

It has, to the point where he’s been 15-1-1 in his subsequent 17 fights. Means is the first to admit that Tom Vaughn is a key reason for his resurrection.

“He’s not like a father figure to me; he’s like a cool ass uncle,” said Means of Vaughn, the man who led Carlos Condit to a WEC title and who now heads up the Power MMA team that is home to the likes of Ryan Bader, Aaron Simpson, Seth Baczynski, and CB Dollaway. “He’s just real with stuff. He’s been through ups and downs in his life, he understands the fight game a hundred percent, he was a competitor himself, and he’s a good friend of mine. Tom brings everything – he brings the energy, he brings the passion, and he helps pull it out of me. Without Tom, I wouldn’t be here, so I’m real happy to have that guy around.”

These days, Tim Means is real happy about a lot of things, not the least of which being that at 2-0 in the UFC and with a nine fight winning streak under his belt, he’s starting to get noticed – not for his past, but for his present.

“I belong here for sure, but I don’t think I’m settled by any means because my belt is around somebody else’s waist at the moment, so I’m still establishing myself,” he said. “But I believe people are taking notice a little more than they were.”

And rightfully so. But as good as things get, don’t expect him to ever forget how bad they used to be.

“Sometimes when I wake up night I don’t need to open that refrigerator because I have a fight coming up (Laughs), but every day I get up or I get home from practice and I put on my DirecTV and put my feet up and pet my Rottweiler I think about it (the past). But I have an awesome girlfriend, an awesome supportive family, an awesome team, and I’m just grateful, man.”