Tim Means: Inside the Mind of a Prizefighter 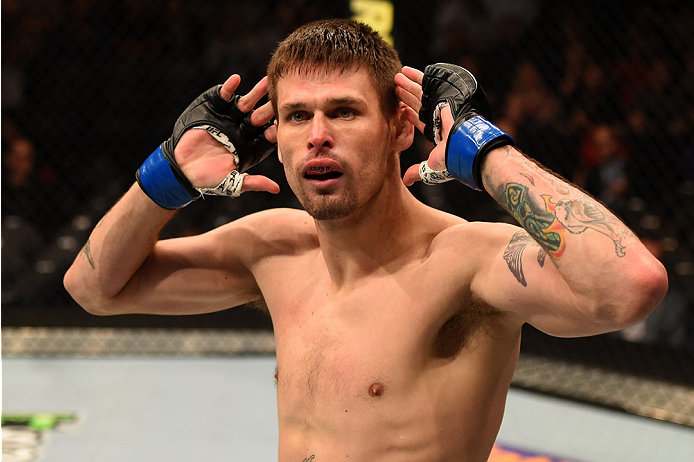 Job security is a reality practically everyone has to face at one point or another in their life. Yet as Tim Means enters a highly-anticipated UFC 189 bout with Matt Brown on Saturday in Las Vegas with a four-fight winning streak in his back pocket, his job is likely more secure than most. Just don’t say that to the Albuquerque welterweight.

“I have more incentive now,” he said. “I have a few more bills on my table and I have a couple more kids to feed and nieces and nephews to help take care of, and that incentive to go out, win big, get the bigger paycheck, and just have another fight and keep my job, is huge.”

It reminds me of another gritty prizefighter who battled through some rough times, including a stay in prison, to become one of the best in the world at what he does – boxing great Bernard Hopkins. When Hopkins was preparing to fight Oscar De La Hoya in 2004, he told me that if he lost, he would be back fighting on ESPN. I said that was impossible, but he said that when things were at their best, he needed something to happen to shake things up and remind him not to get comfortable.

Means, despite all his recent success, is not comfortable, and he remembers being out of the UFC for two fights in 2013-14, wondering if he was going to get back in the Octagon.

“You can’t forget,” he said. “When I was getting locked up, there was an old-timer there that told me that if you forget this place, you’ll return. And I don’t ever want to forget where I came from. There were some days I was scraping pennies together. I remember going through the change jar and getting five dollars in the car just so we could get to practice or to the next meal, and I never want to forget that moment. I want to keep that fire alive.”

That fire is clear in his eyes from the moment you first see him on fight week until the final horn sounds. He’s staying in the lap of luxury at the MGM Grand in Vegas right now, far removed from those days of pulling out all the stops just to make ends meet, but you wouldn’t know it from looking at him or talking to him. The intensity of the struggle has never left him, and it’s why he’s been finding a way to get the W against tough opponents, and blowing out those who can’t or won’t match his will to win.

But this is his biggest test to date in the number five-ranked Brown. Is it his biggest fight ever?

“As in name value, yes,” Means admits. “But I think once you start looking into one fight being bigger than the next, you kind of get sidetracked. So you need to focus on it just being another fight, but it can definitely change my stars.”

It’s the sleeper fight on a stacked UFC 189 card, one many feel can steal the show from the headliners, simply because it matches mirror images against each other. Both are aggressive strikers who like to push the pace, both can handle themselves on the ground if necessary, and both can be intimidating in their intensity. Those similarities are not lost on the 31-year-old Means.

“I always liked watching the guy fight, and I know about his previous history with drug abuse and things of that nature, and I feel we’re a lot alike in a lot of ways – our styles, our aggressiveness, our back stories,” he said.

Where they also mimic each other is in the fact that while both are affable family men outside the Octagon, all it takes is one trigger inside it to turn a sporting event into a fight. And for Means, a perceived lack of respect from Brown has got him more fired up than ever.

“I was getting text messages from buddies and stuff saying that he (Brown) was looking at other fights, like the (Carlos) Condit fight, and not giving me credit,” Means said. “I have respect for Brown, but this is the time where I’ve got to show up and take his respect. I think he’s overlooked me and it’s a little bit of a chip on my shoulder, or actually a real big chip on my shoulder. I found the displeasure in it, and I’ve got to make an example out of Matt Brown for overlooking me.”

I chuckle, telling Means that I don’t recall seeing Brown disrespecting him in the media. Then I ask if he needs that kind of stuff – whether real or not – to put him into the right mindset for what promises to be a grueling and taxing fight.

“Yeah, definitely,” he said. “This is a fight where you’ve got a guy coming to try and hurt you and you’ve got to find every little edge that you can to get into this fight and stand toe-to-toe and just go after one another. And Brown’s that exact guy. I’m not gonna have to think, I have to react, and I have a little animosity on the side to make it a personal issue. I definitely have a respect for Brown, and this is a fight I’ve been excited for since the night they told me.”

The fans share that excitement, but for Means there’s a lot more riding on this fight than just a possible win and Fight of the Night bonus. This may be the fight that begins the next chapter of his career, one where he likely won’t be the underdog again for a long time. How does someone who has been written off time and time again deal with that?

“By just staying humble,” he said. “It also makes me want to go out there and try my damndest. I’ve got to beat Brown to the punch, I have to outwork him every second of the fight, because that’s when he gets comfortable, when he starts to outwork you and guys stop throwing back at him. But even more than paychecks and stuff like that, when this is all said and done, I want my name to be remembered and I want it to be as a guy that would get in there and fight and leave it all in the cage, and I think I’m going out there to do exactly that.”