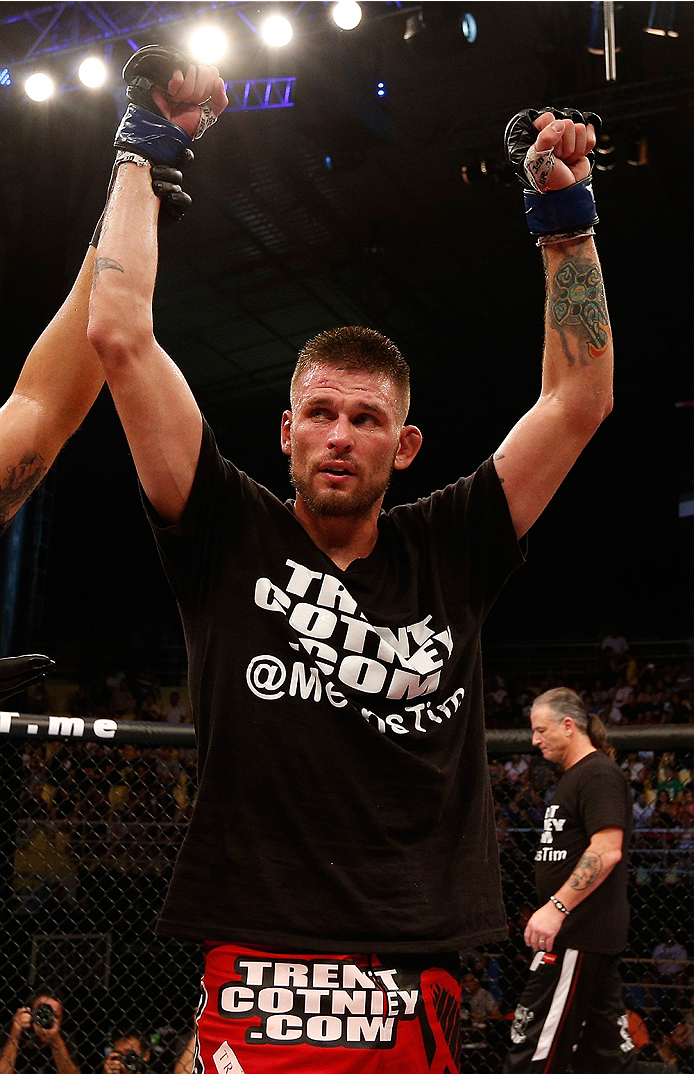 The key to a man’s heart is through his stomach, and the key to continued success in the UFC for Tim Means is no different.

Earning back-to-back wins as a welterweight, Means is a much happier and much more dangerous fighter since he stopped starving his 6’2” frame to cut down to 155 pounds.

“The thing that is different now is that I’m taking in a whole bunch of food,” Means said. “I’ve been really enjoying practice a lot more not having to worry about cutting to 155. In some of my last fights, I have had guys hurt and I have let them off the hook. I am still adjusting from 155 because then I was running on fumes the whole fight. I was always having to pace myself. At 170, I’m able to open up a bit more and I’m able to dictate the cardio aspect more because the gas tank is a whole lot bigger now. It was a burden cutting to 155 pounds and fighting wasn’t fun anymore. Now, the week of the fight, I’m taking it all in and I’m enjoying my job.”

The newly-minted 31-year-old grabbed his most recent win inside the Octagon by traveling south of the equator to take on Marcio “Lyoto” Alexandre in his home country. The Ultimate Fighter: Brazil 3 finalist Alexandre did land a few fancy kicks, but Means’ aggression and determination to make the bout a scrap instead of a fencing match is what secured the victory for “The Dirty Bird.” It wasn’t Means’ most satisfying W, but whenever one can walk into enemy territory and walk out with their hand raised - it’s a good day.

“I thought I had an okay performance,” Means said. “I think they gave him the second round because he dropped me with that head kick. Even with that head kick, I think I won that round because I finished on top and I landed the better strikes in that round. That was a super awkward style to face. He was going backwards, but he could stop on a dime and throw head kicks. Overall, I kept the pressure on him, which I’ve done in all of my fights. He’s a guy who doesn’t want to fight at the end of the day. He’s a good athlete, he’s got a good point style, but I feel like that’s not what a professional fighter should be about.”

Improving his overall record to 22-6-1, Means is developing into a better UFC fighter not just physically, but mentally as well. Not every trip inside the Octagon will afford him the fan-friendly, striking slobberknocker that he desires, but it’s up to Means to win as a strategist as well as a slugger. Being able to get a win like the one in Brazil, where his opponent refuses to meet Means head-on is proof that he is training his fists and his wits.

“I like it when guys try to come after me and try to bully me,” Means said. “That’s where I feel like I shine the best. I’ve learned a lot from my losses. It wasn’t like I was getting blown out of those matches. I was getting out strategized. It showed me that I can’t just be the same guy and expect guys to come in and want to bully me and come after me. You have to play that chess game. Timing drills have really been helping me in practice. I’m really excited about the future and what it holds for me.”

In charge of upgrading Means is the same trio who got him to the dance in the first place: Tom Vaughn, Arlene Sanchez-Vaughn and Jon Judy. Nestled in the storied fighting streets of Albuquerque, New Mexico, Means has trained almost his whole career out of FIT NHB under the tutelage of the Vaughns. It’s a partnership that he believes works so well because of their ability to communicate with Means, especially when the lessons don’t come easy.

“They have been my top trainers and really my only trainers through the majority of my career,” Means said. “They have 30 years of experience under their belt and they just know what they’re talking about. They explain things. Jon Judy is a great wrestling coach and sometimes I’m too stupid to pick things up, but he can break things down and explain them like I’m a two-year-old (laughs). Those guys are patient and I just trust them. I feel confident going into battle with them in my corner.”

That next battle is this Saturday when The Dirty Bird will fly to Los Angeles for UFC 184 and a showdown with Dhiego Lima. The Ultimate Fighter 19 finalist got back to his winning ways in November by taking home a unanimous decision win over Jorge de Oliveira. Sporting an 11-2 pro record, the Brazilian born member of American Top Team Atlanta likes to come forward and often with his sights set on a finish - most likely a submission. On paper, Lima is the type of tussle that Means has been looking for.

“He seems to be real durable,” Means said. “Big guy, likes to bully, likes to come after you, so I feel like that plays right into my strengths. I always expect that once we start to exchange, he’ll shoot for takedowns. I have been feeling really good with my wrestling, my offensive wrestling, my takedown defense. Right now, it’s about thanking those extra calories in me, so that I’m paying attention when I’m tired and not just going through the motions.”