"Let’s put me in a stacked weight class with some energy and see what happens." - Tim Means 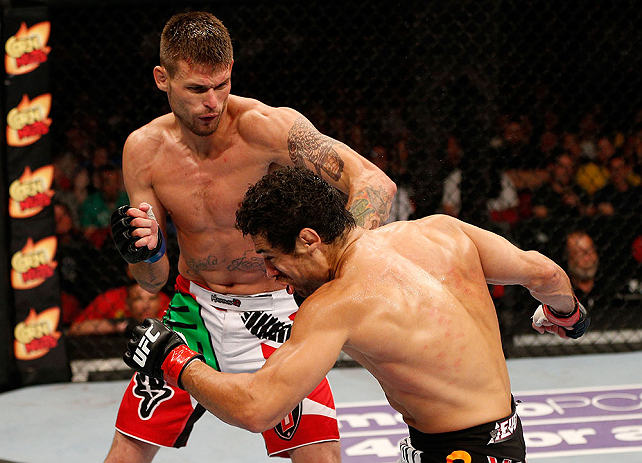 Tim Means wasn’t expecting to be back in the UFC this soon. In fact, he wasn’t even thinking about it, not just yet.

“I was just trying to get the new weight class felt out and see how I was going to do there, and deal with the fights I had with Legacy,” said Means, a former UFC lightweight who took the road less traveled and went up in weight, rather than down, after a 2-2 run in the Octagon that started with promise in 2012 after two wins, but ended in disappointment after he dropped 2013 decisions to Jorge Masvidal and Danny Castillo.

But at welterweight, the Albuquerque native made an immediate impact, knocking out UFC vet Pete Spratt in a single round, and handing the same fate to Artenas Young four months later. How much of an impact? He eventually got a call from his coach and manager Tom Vaughn.

“He told me he accepted a fight against Neil Magny,” said Means, who laughed when asked if Vaughn asked him or told him about the UFC Fight Night bout, which takes place this Saturday in Cincinnati.

“That’s what he does and that’s the way I like it.”

Means, 30, is in good spirits as the Magny bout approaches, and not just because he’s back in the UFC, but because the only fight he will have this week is with Magny, and not the scale.

“It’s a huge mental relief,” he said. “I don’t have to worry about making weight. All I have to do is go fight. Making weight really became a burden, and it made fighting un-fun because I knew that that last week was super hard, when the last week should be walking, sweating a little bit, and saving some energy, but not for me. I’m still fully geared in plastic, doing ten rounds of Thai pads all the way up to the fight, having to run five miles, and you’re still stressing on weigh-in day because you took the fight on 12 days’ notice.”

It had become a brutal ritual for Means, one especially painful when you’re a 6-foot-2 lightweight.

But when it ain’t broke, you don’t fix it, and after his first two UFC fights resulted in wins over Bernardo Magalhaes and Justin Salas, Means was 15-1-1 in his previous 17 fights. But as he got ready for a September 2012 bout with Abel Trujillo, he got an ominous sign when he slipped in a sauna on weigh-in day and banged his head, forcing the cancellation of the fight.

“I hate thinking of that day, but at the same time, that was me really needing to move up in weight at that time,” he said. “I didn’t pass out or nothing like that, but I still wasn’t feeling good that day, and making weight was super hard.”

Means enlisted diet and performance guru George Lockhart for his return against Jorge Masvidal in 2013, but that still didn’t do the trick.

“The weight cut was easier, but I was still sucked up in my face and it looked to be super hard on my body,” said Means. “And that’s when it was done right.”

He was decisioned by Masvidal and then Danny Castillo, prompting his release and a good hard look at what he was doing in and out of competition.

“This isn’t boxing, this isn’t kickboxing,” he said. “If you’re not going to adapt, then you need to get out of MMA. Those fights showed me that I need to get back to the drawing board.”

As for the change in weight classes, he had one test to pass before he made the call to go north.

“I went out there with the Arizona State University guys and I wrestled some of their 205-pound and 185-pound All-Americans, and my strength was fine and I was holding my own,” he said. “It wasn’t like I was a weak guy trying to move up a weight class. I got to be a pretty heavy guy trying to go too low and by the time I’d make weight, that was a fight in itself. I’d get so frustrated and I’d be stressing out about it and I was depleting a lot of my energy and fighting on fumes. Now, it’s a good fit because I’m not having to go out there and pace myself and try to turn it on late in the fights. I can go out there, dictate my pace, and have the energy to do that.”

Now it’s a whole new cast of characters at welterweight for Means to deal with, but he’s not worried about that.