Tim Means: Back to Basics

"No game plan, I’m just going to go and react and it should pay off." - Tim Means 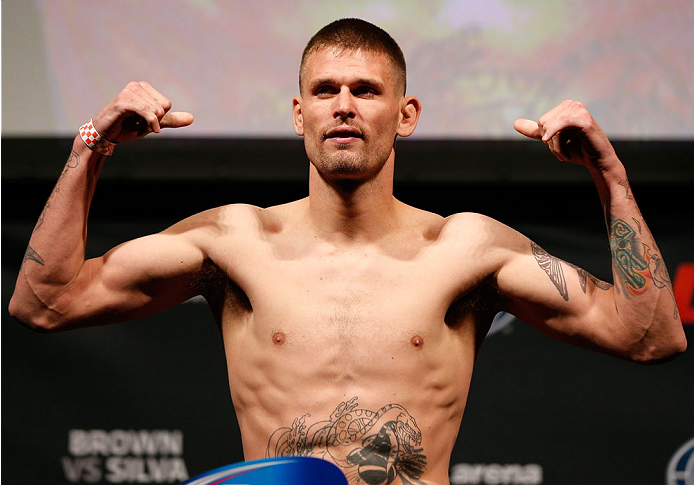 When Tim Means describes the training camp for his Saturday fight against Hernani Perpetuo, please note that he’s not complaining.

“It’s been a humbling training camp and I really had to be open-minded,” said the Albuquerque welterweight, who has been sent into the fire in preparation for what he hopes will be a return to the win column after a May decision loss to Neil Magny.

In that fight, Means was simply outboxed and outfoxed by the fleet-footed Magny, whose stick and move style kept “The Dirty Bird” from getting untracked. Clearly frustrated as he walked past press row after the fight, Means now looks back at the bout with the finger pointed solely in his own direction when assigning blame for the defeat.

“I was just disappointed in myself,” said Means, a former lightweight who had won two straight at 170 pounds before the loss to the former Ultimate Fighter competitor. “I didn’t shoot takedowns, I didn’t do things I was supposed to do when I had Magny on the fence, and I was frustrated. I let any momentum I had get away from me and that was my fault and it cost me a win check or a bonus check in the long run. And that was my fault.”

The 30-year-old got over the loss quickly and then it was back to the FIT NHB gym, where Tom Vaughn and company put Means through his paces. And this time around, the focus was on making Means remember his roots.

“My coaches have been telling me, get back to your wrestling, get back to what you do,” he said. “This camp I’m going to show a different Tim Means. The last couple fights have only been one-dimensional.”

That one-dimension has worked well for Means over the years, but he knows as well as anyone that when you shut down his brawling style, you’ve opened up your best avenue to victory. He’s about to change that.

“For ten weeks I’ve been shooting a double leg,” he laughs. “Now it’s starting to become second nature when they bring in these guys that I’m not familiar with and we get into these exchanges and I find myself changing levels and shooting the double leg rather than just standing up straight and throwing punch or kick combinations. I find myself getting into wrestling exchanges now and it just comes with drilling the moves constantly.”

The key part of that comment is the arrival of new faces in the gym to work with Means. When you work with the same crew over and over, you know their tendencies and their tells. That’s not the case with the group he’s been sparring with in this camp.

“We bring in guys that don’t respect me, so they have them train with me and I have to earn their respect,” he said. “To do that, I have to catch them with the right combinations or hit the right takedowns.”

And after two and a half months of that, it’s becoming automatic.

“I’ve been drilling situations and we’ve been doing that a lot rather than just doing sparring,” he said. “I get totally exhausted and then my coaches put me in certain drills and we just really work the positions I’ve been getting stuck in during the fights. No game plan, I’m just going to go and react and it should pay off.”

“I missed four years of mixed martial arts,” said Means. “I had to get my drug habit taken care of and get done with my legal stuff, so I’m still trying to play catch-up to a lot of these guys. But I feel like things are starting to fall into place, and I’ve learned a lot with these losses.”

He’s learned even more about life, and after walking down some dark paths in his life, these days, the only thing that you should be focusing on in interviews with Means is his fight game. He appreciates that, and hopes now to be a positive role model.

“I’ve had to change who I am and people look at me differently,” he said. “It’s really taken me five years to not be considered a s**tstick. People are looking at me as a respectable coach, a respectable fighter, and those are good feelings. My fiancé and I talk to the youth here in Albuquerque and just try to tell my story and what was going on in my life. Some kids catch on or start listening, and other kids just want to do things themselves, which I totally understand. I was that kid and I had to do it my way and learn the hard way. But I really feel good with what I’ve been doing the last five years and I could hold my head up high and not have to look over my shoulder looking for cops anymore. I have my frustrations in life like everybody else, but life’s good.”