"Every fight is going to be harder than the last one. I just have to focus on the opponent at hand." - Tim Means 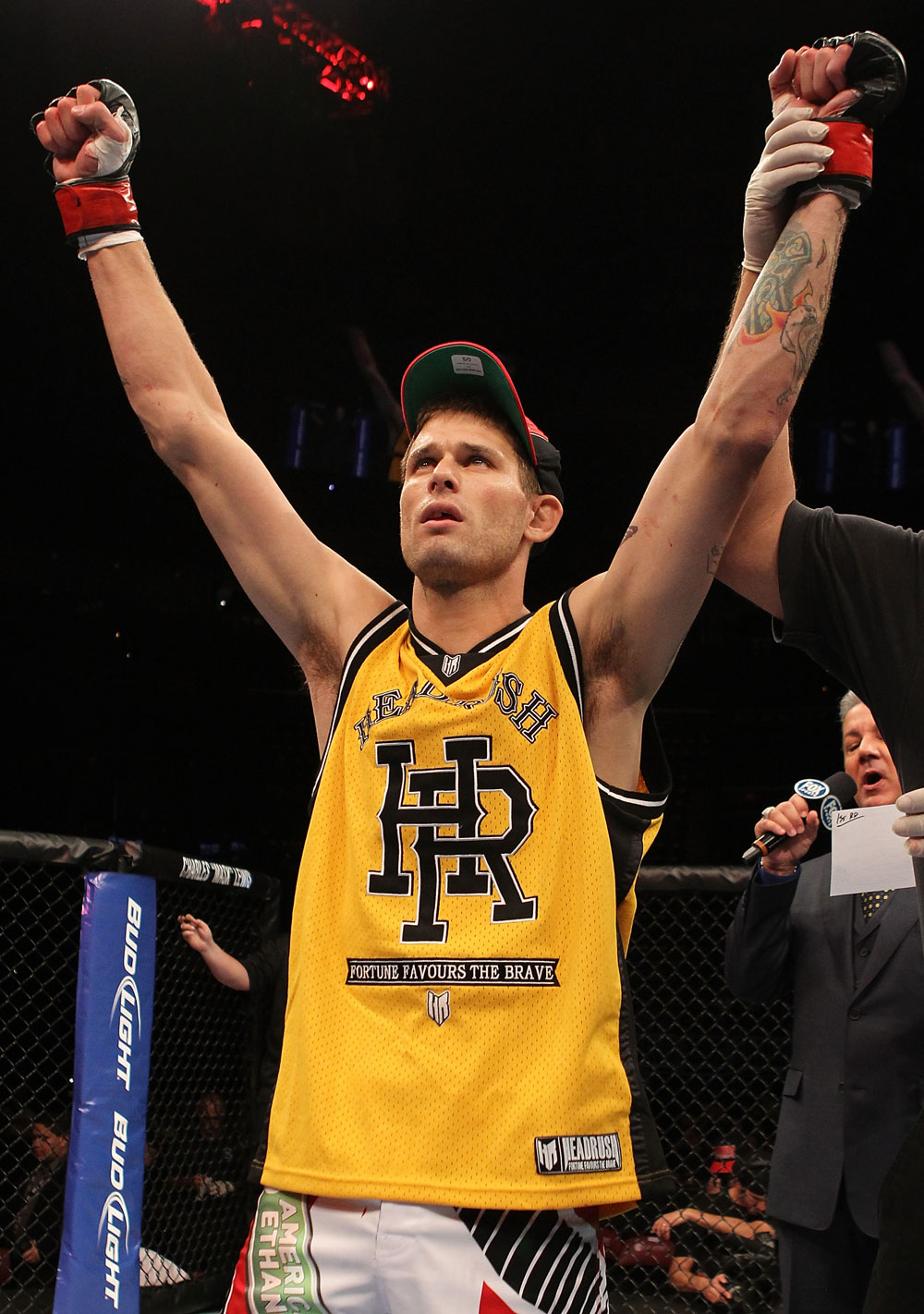 Get your chuckles in while you can because Tim Means isn’t joking around.

“I'm better than Gilbert Melendez, so I'm going to stop Jorge Masvidal on the 20th,” declares Means. It’s always exciting hearing a fighter full of spit and grit say he’s going to do something and, at the same time, actually sounding like he can.

Maybe it’s the Oklahoma accent, the time-served in prison, the 18-3-1 record, not losing at lightweight since 2005,  the tutelage of New Mexico’s utility knife Tom Vaughn, the nine fight win streak or, maybe just maybe, it’s all of the above. Of course, one has to consider the video evidence of the 6’2” Means hammering his opponents with reach and power in back-to-back victories inside the Octagon last year. When all the factors are added together, the result is an even blend of success and seriousness that is gunning to make its mark in the most talent-rich division in the UFC.

“There are a lot of good guys in this weight class like Melendez fighting [Benson] Henderson,” states Means. “These are all good athletes, but when it comes down to it - I'm meaner than all of them. And I'm going to exploit that in all of my fights.”

At 29 years old, “The Dirty Bird” is ready to rule the roost. The product of Albuquerque’s FIT NHB made his Octagon debut in February 2012 with the unanimous drubbing of Bernardo Magalhaes. Means grabbed a couple 10-8 rounds, threw almost 200 strikes while landing nearly half of them, and successfully defended 11 takedowns. As a follow-up to that one-sided performance, he only needed a minute to drop and stop Justin Salas with punches in June. Now, Means has his sights set on former Strikeforce #1 contender Jorge Masvidal, who he faces this Saturday in San Jose.

“I feel that I'm the most aggressive 155-pounder in the UFC,” affirms Means. “I'm going to get in your face and I'm going to force you to go backwards. Masvidal does really good going backwards when he fights, but I don't think he likes a lot of pressure. Melendez was able to pressure him a lot. He got in his face, hit him with shots, tricked him with the takedown, and things of that nature. Pressuring him and making him feel uncomfortable is what I'm looking to do. Masvidal has done really good keeping fights at his pace and that's the reason why he lasts so long. People don't pressure him. I'm going to do that to him.”

A veteran brawler from American Top Team, Masvidal is set to make his Octagon debut after battling with some of the best lightweights and welterweights the world over, including Yves Edwards, Paul Daley, K.J. Noons, and Strikeforce lightweight champ Melendez. With a penchant for staying in the pocket and scrapping, “Gamebred” has won big fights and lost big fights, but is rarely finished, with his lone TKO loss gathering dust from five years ago. While a win over Masvidal would improve any lightweight’s stock, a stoppage would skyrocket it.

“Let me think how to say this politely, I have to finish Masvidal to get people to start putting me into those title talks,” explains Means. “I can't decision a guy that a former champion decisioned. I have to go beat him. I have to put the brakes on him and make people notice. If I just decision him, he's lost decision fights. But who has stopped him? That's my mentality going into the fight - I have to stop him. That's from post to pillar and that's all I have in my head right now.”

While Means didn’t need any added motivation to continue his impressive win streak and continue his loss column clean in the UFC, there were two freak occurrences that clipped the wings of “The Dirty Bird” for the second half of 2012. The first was the cancellation of UFC 151 in September, where Means was originally scheduled to tangle with Abel Trujillo. The second incident he might have got a laugh out of if it didn’t happen to him, as Means slipped in the sauna the morning of UFC on FOX in December’s weigh-in and nearly knocked himself out. While these have been frustrating moments, they’re nothing in comparison to what he’s previously overcome in life and will only be chalked up as more fuel for this emerging lightweight’s fire to keep his chin down, his punches up, and his movement forward onto another victory.

“Every fight is going to be harder than the last one,” tells Means. “I just have to focus on the opponent at hand. The win streak is cool. Since being out of prison, I've been motivated and I needed to make some money. I wasn't sure what I wanted to do with my life. I wasn't sure if I wanted to work at McDonald's or a library or fight. I started training again and started taking fights again and I started winning fights. I fought Jamie Jara and I realized then that I need to stay in my weight class and take things more seriously instead of jumping around taking fights whenever. Trial and error for me. I'm still going through that at 29 years old. A slip in the sauna is a trial and error. The funniest joke for me was when Joe Rogan interviewed the sauna on the internet. All that stuff is funny, but people will be looking at me in a different life after me and Masvidal square off.”

In preparation for this bout, Means is busy training at altitude at FIT NHB under the watchful eyes of Vaughn and Arlene Sanchez-Vaughn. For wrestling, Means has rededicated himself to the grappling mats with coach Jon Judy. As luck would have it, Vaughn is also the head coach for the UFC studded cast at Power MMA in Arizona, where Means gets work in with Ryan Bader, CB Dollaway, Aaron Simpson, and Seth Baczynski. An added bonus this time around was some sparring with #1 ranked UFC welterweight Johny Hendricks.

“I feel my cardio is on a whole new level, my nutrition is different, my strength and conditioning is different,” asserts Means. “I've matured as a person and a fighter. It's taken those trials and errors to help me get into a confident mind-frame to get up to do what I have to do. Bleeding a little bit for a paycheck is well worth it. I'm more than excited to work for the company that I'm working for. I just want my style to be liked by the fans and that's what I'm going for. I might have put in the blood and the sweat physically, but they've put in a lot of time and hours to beat me up and to make sure that I'm going into this fight 100% and I couldn't appreciate that any more.”

Easily, the most important member of team Means is an MMA fighting flyweight of a different gender: Brenda “Boom Boom” Gonzalez. The engaged cagefighting couple are each other’s rock before, during, and after training. While “The Dirty Bird” is making strides in the Octagon, “Boom Boom” is 4-0 with three TKO finishes since turning pro in 2011, with a big bout in May against the undefeated Rin Nakai in Japan. With the women’s bantamweight division on The Ultimate Fighter next season, Gonzalez is planning on trying out, with the very real possibility of being on the show and making their household all UFC employed. Honestly, it would be all types of incredible if a husband and wife earned Fight Night bonuses on the same card.

“I see her cutting her weight and she's suffering and sucking it up and it makes me want to work harder,” reveals Means. “She's pulling her weight to make her fights happen and to make her paycheck; it makes me try that much harder to make my end of the deal work. She's a hard worker! I've got more experience as far as fights and I've been in the game longer, but overall work ethic and heart - she beats me in that. I have to compete with her in that to outwork her and to outdrive her. Breaking her doesn't work. She spars with all males. She spars with 125 and 135 pound males in practice. She's going to be trying out for The Ultimate Fighter in April. Her nutrition, her weightlifting, she tends to beat me up to make me do the dishes, which is messed up (laughs). It works. We fight, we bicker, we get along, and thank goodness for training because it helps us get through every day.”

On April 20th at UFC on FOX in San Jose, California, Means is locked and loaded to put a stop on Masvidal. “Just expect a fist fight,” affirms Means, who has skillfully earned 15 of his 18 wins by finish. Making short work of Masvidal will definitely put an end to any sauna jokes and mark the beginning of “The Dirty Bird” as a lightweight contender.