Tim Kennedy: Ready for Something Serious

"I don’t care what he’s gonna try to do, because I think I can beat him in every area of the fight game." - Tim Kennedy 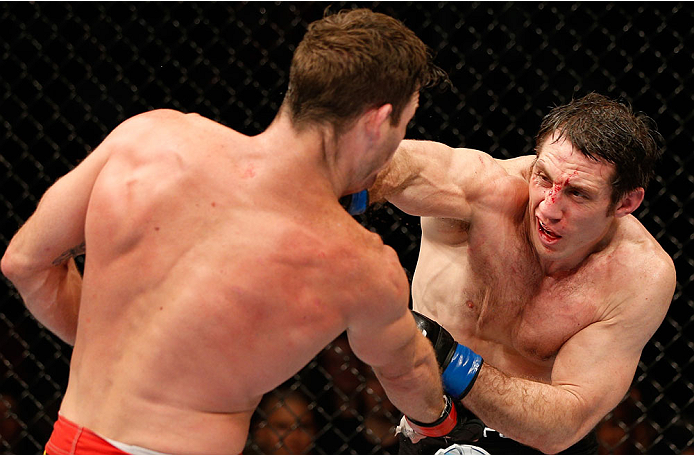 UFC 178 is the biggest event of 2014, and Tim Kennedy is on it, facing Yoel Romero in a pivotal matchup of middleweight contenders. It’s the type of exposure that can make a career, and Kennedy knows it.

“Definitely,” he said. “This is a Pay-Per-View event, and just like the (T.J.) Dillashaw fight (at UFC 177 in August) that just happened, it ended up being anybody’s night to really make a name for themselves. And with Jon Jones and (Daniel) Cormier off of this card, this gives me the opportunity to really get my name out there.”

It’s a task that Kennedy already thought was taken care of – or at least was going to be – earlier this year after his win over Michael Bisping in the main event of the TUF Nations Finale in April.

“I really thought that about the last one,” he said. “A main event against Michael Bisping. He’s ranked number five, he’s a perennial contender. I’m like, ‘yeah, this will move me into discussions for serious placement in the UFC.’ Then I smash him for five rounds and…that’s all.”

The bout against the brash Brit, which marked Kennedy’s fourth consecutive win and second straight in a UFC main event, kept the Texan in the rankings, and it secured his place as one of the best middleweights in the world. In that way, the win was a complete success. In Kennedy’s eyes though, it wasn’t what it could have been.

“I should have knocked him out,” the 35-year-old said. “There was a war of words and I was trying to get him emotionally involved. The problem with that fight is that I stuck so close to my game plan, which was big huge punches on entries, followed up by takedowns and control. So even the times I hurt him – and I hurt him really bad and put him on loopy street in the third and fourth rounds – I just went right in for the takedown and controlled him. Rinse, repeat, rinse, repeat. I should have had the want to finish because I should have and could have. That’s on me that I didn’t, but it went exactly how we prepared and planned. I executed the game plan perfectly, and he got smashed for 25 minutes.”

Aesthetically, the fight with Bisping didn’t live up to the bar he set when he knocked out Rafael Natal last November in the Fight for the Troops main event, and Kennedy took heat for it. Oddly though, he doesn’t hold any grudges with the media for some of their post-fight barbs.

“I definitely understand where they’re coming from,” he said. “I’m usually a worse critic than the journalists come Monday morning. Most people picked Bisping to win. I was the underdog, and almost all the MMA media was like ‘yeah, this is a tough fight, Bisping’s takedown defense is going to nullify Tim Kennedy’s crappy wrestling and then he’s going to just pick him apart on the feet.’ That didn’t really happen, but Monday morning, I’m the one throwing stones at myself because I should have done this or should have done that.”

So it’s his fault and the media just followed suit?

“I’m okay with that,” he deadpans.

This kind of humor is ever-present in any dealings with Kennedy that don’t involve him punching someone in the face, but it’s rarely seen when he’s in the media spotlight. Usually, the focus is on his military service, and while that’s an admirable part of his life story and one he’s proud of, it’s not the only one, and it’s possible that not seeing the other parts of his personality have kept him from getting to where he ultimately wants to go.

“This is fighting,” Kennedy said. “They (fighting and his life in the military) have nothing to do with each other – it’s apples and oranges. People want to hear what I do with Special Forces, as a ranger, as a sniper. And I’m like ‘what does that have to do with fighting? Let’s talk about fighting. They couldn’t be more different, there’s nothing similar about them. So I guess the effort on my part is that if we’re doing an interview about MMA, let’s talk about MMA. My military service has nothing to do with what I do in the ring.”

So what have we established here? Tim Kennedy can fight, he’s one of the best in the world at what he does, and he’s got a quick wit and subtle sense of humor. All he needs is that signature win to put him over the hump. Is Yoel Romero going to be that win? It’s a tough task, and he knows it, but he also knows what he’s in for come Saturday night.

“He hits hard, he’s an athletic guy, he’s a southpaw, and he has a ferocious rear hand, but it’s still a fight,” Kennedy said of the former Olympic Silver medalist from Cuba. “People are so scared of his takedowns, and if he’s smart, he’s gonna try and take me down. He doesn’t want to stand with me for three rounds. I don’t care what he’s gonna try to do, because I think I can beat him in every area of the fight game. His best chance is to try to score takedowns and smother me.”

Kennedy’s been there and done that against Bisping. Now he wants more, and he’s got just the right stage to get what he wants.

“It (UFC 178) is stacked top to bottom, no doubt, and this fight is a big one and I hope that this will make me 4-0 in the UFC,” he said. “Then I’ll have two main event wins, a Knockout of the Night, and beating another top ten guy will hopefully put me in the talks for something serious.”