Tim Kennedy: The Quest to Fight the Best

"Ultimately, I have to put him in the places that he’s not good, that I
excel at, and make sure that we stay there, and that’s what I’m gonna
try to do." - Tim Kennedy 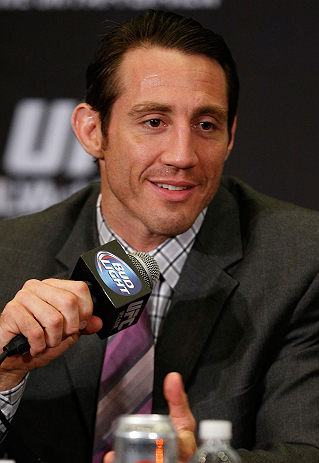 When Wednesday’s UFC Fight For The Troops event was announced, you knew that U.S. Army veteran Tim Kennedy was going to be there with gloves on. Unfortunately, he had a few dicey moments where he didn’t know who would be joining him in the Octagon at Fort Campbell, Kentucky.

“It was Lyoto Machida, and then it was eight guys because I was picking fights with Alistair Overeem, John Dodson, Urijah Faber, Miesha Tate, and then I got Natal,” said Kennedy, whose light-hearted attempts at picking a fight on Twitter captivated the MMA community until Natal – Rafael Natal – accepted the headlining gig.

Then the real fun began, as Kennedy had to break down a style distinctively different than that of Machida, a former light heavyweight champion that the Austin product was looking forward to figuring out.

“I was pumped,” said Kennedy of the scrapped bout with Machida. “He had been that perennial contender at 205, he’s been the champion, and I know everybody uses those nice words, calling him elusive, but he’s a runner and gunner. He backs up until he has you where he wants you, and then he blasts forward. And he complains if he loses a split decision because he was running the whole entire time. So it’s a tough, tricky fight and he’s very, very talented. He posed a lot of problems, especially for my style, to try to figure out, and I was excited to try to figure out that puzzle. Now I’m fighting another super tough Brazilian, just tough in a different way.”

With Greg Jackson and company in his corner, you assume that they made the proper adjustments, and for Kennedy, a veteran of over 12 years in pro MMA, getting an opponent switched up is old hat.

“The style change was big and what I had to do in fight camp to prepare for each of them, respectively, was very different, but fortunately it happened early enough on where we were able to make an adjustment,” said Kennedy, 16-4. “I was already in great shape, so we could really focus on making sure I was doing all the right things to beat Natal. Opponent changes happen, so I’m used to it. If you go back and look at my career, it’s actually pretty typical for me to have two or three opponents for a given card.”

Now he only has one, and in Natal, he faces a surging middleweight who has won three straight bouts in the Octagon and that presents some interesting style difficulties in his own right.

“He’s super tough, and when I say tough, I mean that in a very complimentary way,” said Kennedy of his opponent. “He has a great heart, he hits hard, he has good wrestling, he has fantastic jiu-jitsu, and there’s a whole bunch of different ways that he can win this fight. So for me to beat him, it’s not just like I’m gonna go out there and put him on the canvas. I’m gonna have to hit him a whole bunch, and I hit hard. So it’s a big nod of my head to him for his skill set and his toughness. Ultimately, I have to put him in the places that he’s not good, that I excel at, and make sure that we stay there, and that’s what I’m gonna try to do.”

For Natal, it’s the opportunity of a lifetime, a chance to make his name on the world stage by upsetting a veteran 185-pound contender. For Kennedy, it may be even more pivotal, considering that to maintain his place in the pecking order, he has to win, with an impressive victory key to him continuing to move toward a title shot. And let’s not forget that he’s fighting in front of the troops, but he’s not looking at that as any sort of pressure.

“I’ve always really just been a fighter, so regardless of where I was fighting or how I was fighting or if I was using a gun to fight or a bat to fight or a pair of UFC MMA gloves, I just like fighting,” he continues. “So ultimately, it ends up with me and this dude in the cage and we’re trying to knock each other out. Who’s sitting around you becomes less important once the cage door closes. But I’m super pumped and excited to be on the Fight for the Troops card. It’s humbling, it’s going to be exciting, and I know there’s gonna be an amazing energy, but I’m excited I’m fighting a good guy.”

So it goes without saying that making his UFC debut against Roger Gracie in July after a long stint in Strikeforce wasn’t stressing him out at all.

“It’s another fight,” said Kennedy, who won a three round unanimous decision over Gracie at UFC 162. “It’s exciting to be fighting for the UFC because I’m fighting the best guys in the world. In my weight class, there are really no other 185 guys on the planet anymore. Strikeforce had me, Jacare (Souza), Luke (Rockhold), (Lorenz) Larkin – a small stable of talented guys. But now everyone in my weight class is in the UFC, so if I say I want to fight the best guys in the world and not be fighting for the UFC, then I’d be a liar. So I’m excited to be fighting for them because that gives me access to the best fighters on the planet.”

And he wants some more of them in the future.

“My last Strikeforce fight (in January against Trevor Smith), I finished the guy, then I fought Roger Gracie, a dominant win there, and beating him (Natal) at the end of the year really puts the exclamation mark on where I’m standing in the division, saying that I do in fact want to be fighting the best guys and maybe giving me an opportunity to have some marquee matchups with some of the greats,” said Kennedy of his 2014 plans. “During my little callout phase of trying to get somebody to fight me for the Fight for the Troops card, I called out Wanderlei Silva, Rich Franklin, Cung Le, and I would really love, after this main event fight, to have one of those marquee dream fights, fighting some of those guys that have been excelling for a long time.”