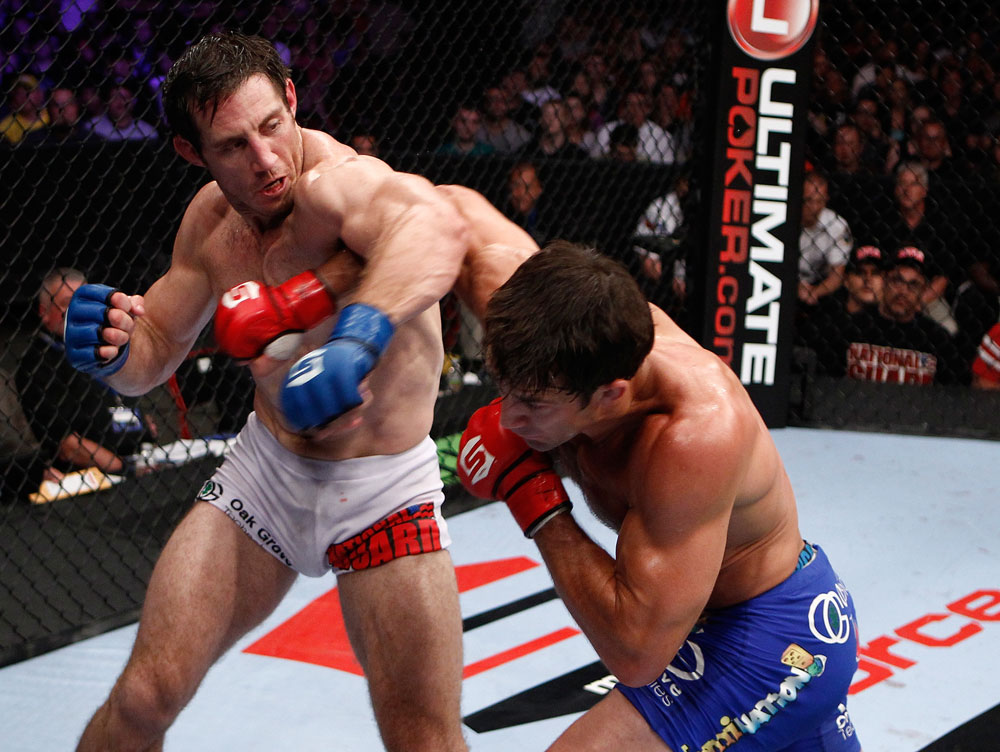 In a world filled with conflict, Tim Kennedy finds his way better than most.

The Army Ranger turned mixed martial artist has been one of Strikeforce’s top middleweights since debuting for the organization in 2010. Over those two years, the 33-year-old has put on a collection of impressive performances. His only two setbacks under the Strikeforce banner have come when Kennedy reached the top of the ladder, only to be denied in his championship bids.

Never one to be detoured by adversity, Kennedy is ready to get things back on track. He will have the perfect opportunity to do so when he faces rising prospect Trevor Smith this Saturday in Oklahoma City.  While Smith may not carry the name recognition that Kennedy brings to the table, the war veteran isn’t overlooking his opposition, and is excited for the fight.

“[Smith] is dangerous,” Kennedy said. “You want to talk about underrated or under appreciated. Trevor is a hard-hitting, fantastic wrestler, who is really gritty and super tough. He has power in both hands. I’ve trained with him before and he is a very talented athlete.

“Stylistically it is a tough fight for me. He is taller and longer so maybe he wants to sprawl and brawl, and stay on the outside. It is a tough fight. I’m excited about it because I like challenges. One thing I do know about him is that he is going to want to step into the center of the cage and tussle. That makes me happy.

“Fans are going to see a fight,” Kennedy added. “Trevor and I complement each other stylistically because we are both going to show up to fight. He’s not going to come in there to outpoint me and I’m not going in there to try and wrestle this guy or lay on top of him for 15 minutes. I’m going to fight him. I’m going to try to knock him out or submit him. People can expect a fight. We are going to get in there and throw down.”

With the event this weekend in Oklahoma City, the doors will officially close on the Strikeforce promotion. The San Jose based organization has been recognized for years as the best promotion outside of the UFC in mixed martial arts, and inside their cage, Kennedy’s stock as a fighter has risen.

That being said, the past year has been a frustrating experience for the fighters on the roster. With events few and far between, and two complete cancellations, the competitors under contract with the organization have been forced to sit on the sidelines and watch the situation play out. Now that the end of the road has been set in stone, Kennedy has mixed emotions about the situation.

“I have five fights with Strikeforce,” Kennedy said. “I’ve fought for their title twice, and while I came up pathetically short, it is a bittersweet feeling. I’d hate to say it was great seeing it come to an end. I like to think I’ve been one of their marquee guys. When PRIDE closed, people originally said it was a good thing, but then the same people say they miss it. I miss PRIDE and I never even fought for them. It’s the same way I miss the WEC. It is bittersweet. I’m excited for the next chapter of my MMA career but it’s also kind of sad.”

Once the books are closed at Strikeforce: Marquardt vs. Saffiediene, the transition towards the next chapter of his fighting career will begin. Along with champion Luke Rockhold and former champion Ronaldo “Jacare” Souza, Kennedy is expected to make an impact in the UFC middleweight division.

For years the Strikeforce fighters have battled for respect in MMA, and while it is something his peers may get caught up in, the quest for validation isn’t something Kennedy concerns himself with.