Tim Johnson and the Return of the 'Stache 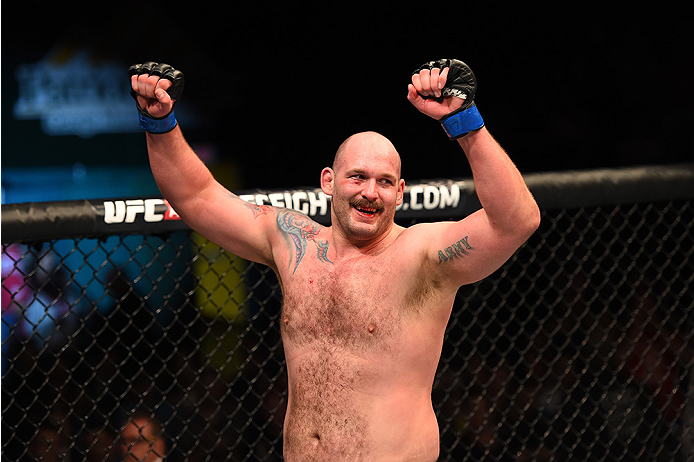 If you’re going to ask a fight fan for their thoughts on Tim Johnson, don’t be surprised if they respond with a question of their own.

In a sporting landscape that contains last names like Nurmagomedov, vivid nicknames like “The Korean Zombie” and “Jacare” and boisterous personalities whose names get drilled into your consciousness because they’re seemingly everywhere, it’s understandable that Tim Johnson might not register.

But mention that the bear of a man set to make his sophomore appearance in the Octagon on Saturday night is the heavyweight newcomer with the Don Frye-inspired duster that picked up a first-round stoppage win back in April and watch how quickly he quickly he’s remembered.

“After the first fight I figured out that people knew my mustache more than they knew me – the ‘stache was bigger than I was – so I’ve got to keep running with that,” Johnson laughs, clearly aware of the impact his facial hair had on the audience that watched him finish Shamil Abdurakhimov in the closing seconds of round one earlier this year in Virginia.

In fact, Johnson actually had bigger plans for his facial hair heading into his second outing, but his commitments to the Minnesota Army Guard interfered.

“I had an awesome pair of handlebars going, but I had to shave them because I actually had a drill weekend (a couple weekends ago) and they’re not really Army regulation, so they had to be gone, but the ‘stache is coming back.” 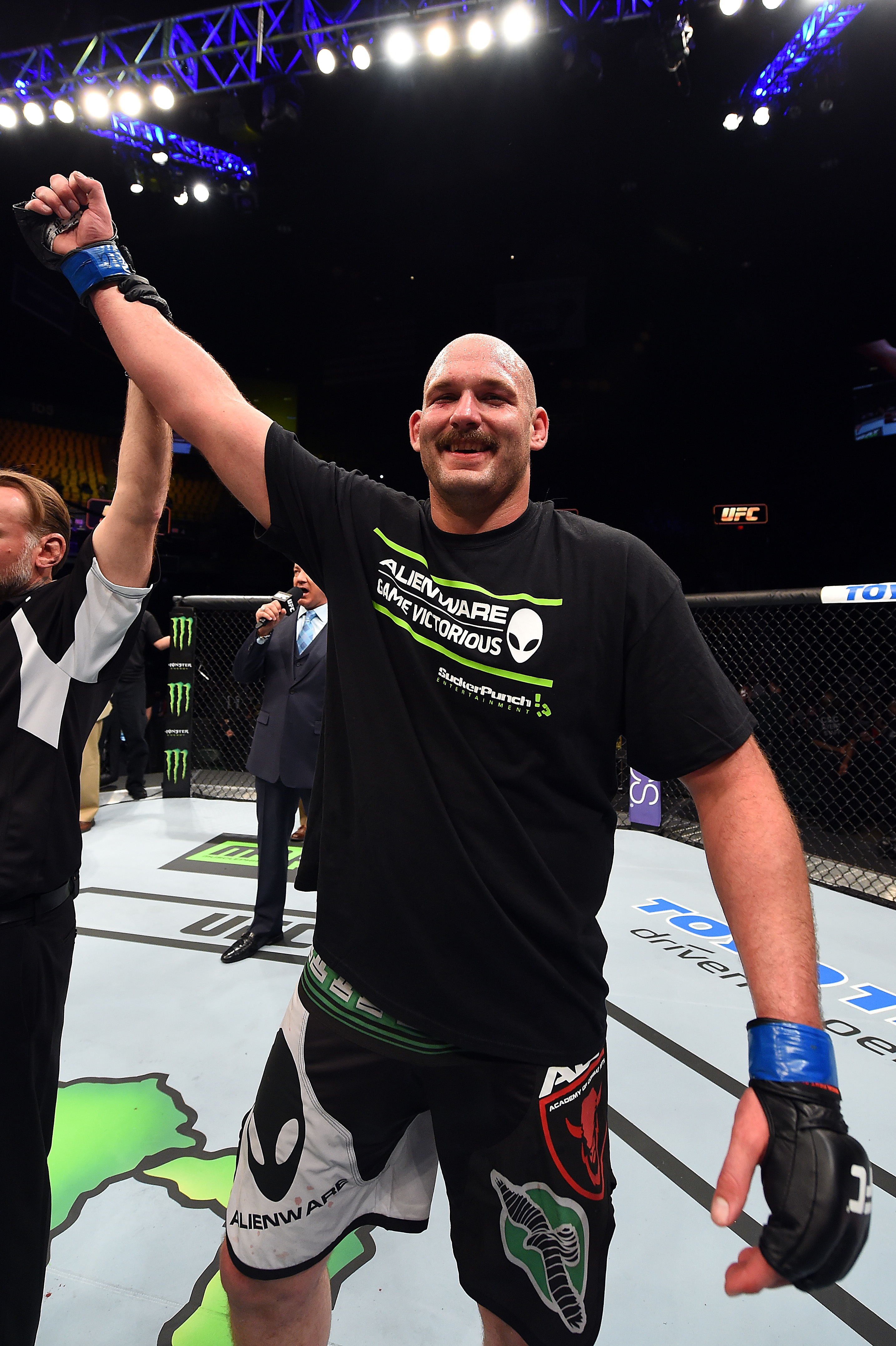 While his top notch lip-warmer may been be what fans remember most about the 30-year-old heavyweight right now, Johnson has a chance to change that – or at least add to what he’s known for – when he returns to action this weekend in Nashville.

Johnson’s debut win over Abdurakhimov pushed his record to 9-1 and extended his winning streak to eight straight, all of which have come inside the distance. In another division, it would almost always take more than a single victory – even an impressive stoppage – to get you hustled up the rankings into a fight that could put the victor into the Top 15, but things are different in the heavyweight ranks.

Fewer fighters mean opportunities come sooner, and for Johnson, that means the chance to step in with fellow heavyweight hopeful Jared Rosholt on the main card of Saturday’s UFC Fight Night event at the Bridgestone Arena.

“A while back I was going through all the weight classes,” Johnson, who earned a call to the Octagon following a first-round stoppage win over veteran Travis Wiuff back in October, begins. “Some of them have over a hundred guys, but with the heavyweights, you have 34, so if I keep putting up good performances, be entertaining, give the fans something they want to see, I can put myself right up there with some of the guys just outside the Top 10.

“There was a lot of speculation with my friends and coaches about who I was going to be fighting next,” he continues. ”We figured it was going to be someone in kind of the same position as I am and I when was offered Jared and I was like, ‘Wow!’ He’s 4-1 and close to the Top 15, which shows what they want to do with me.”

Though he’s still relatively new to the big leagues, Johnson has a clear understanding of what kind of stakes his meeting with Rosholt carries.

The heavyweight division has been in a constant state of motion over the last year, with veterans like Ben Rothwell making a run at title contention, while Andrei Arlovski and Frank Mir are experiencing tandem resurgences after many had started writing career obituaries for the former champions.

Depending on how a couple other heavyweight tussles shake out over the next few months, Johnson knows that Saturday’s bout is an audition for both he and Rosholt, and that a win could propel him into the thick of the chase in the UFC’s big boy ranks.

“They want to see where I’m at and where Jared’s at,” he offers, “and looking into the future, I think this fight is going to be a big fight for both of us. They want to see if I have anything that’s promotable and if they want to keep going forward with me, so I was happy to get that call.”

Although he’s never seen the third round and has an obvious penchant for finishing fights, Johnson harbors no illusions about how his sophomore appearance under the UFC banner could play out. 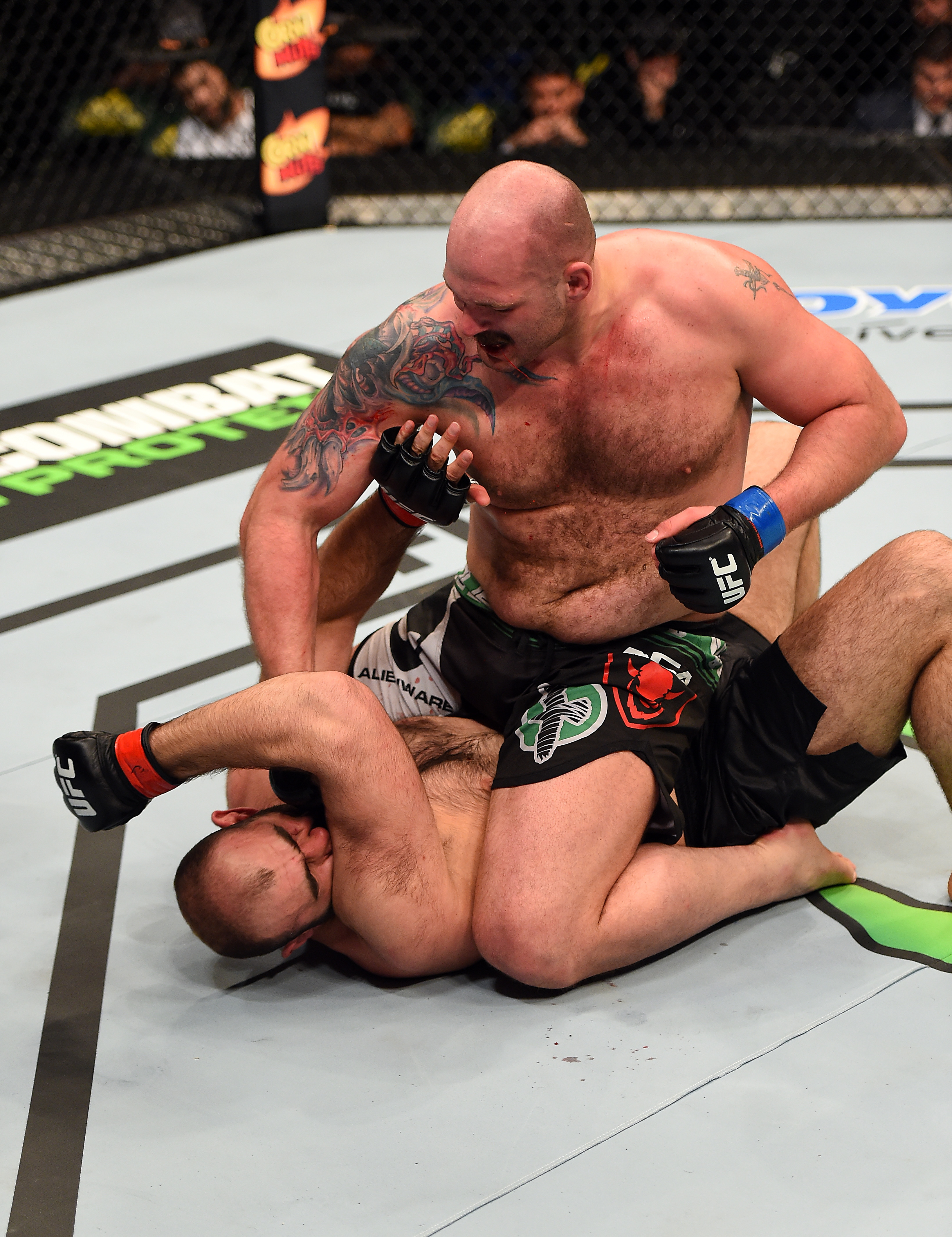 He knows that he’s stepping in with one of the best wrestlers in the heavyweight division - a 28-year-old takedown machine who paid the price for standing with veteran Alexey Oliynyk before rebounding with a wrestling-heavy stoppage win over Josh Copeland back in March – and he expects the fight to play out accordingly.

“His wrestling attributes speak for themselves,” Johnson says of the former three-time All-American from Oklahoma State. “I think he (had the most wins) heavyweight in history, so that’s a pretty impressive accolade to have.

“I think it’s going to be a battle of wills – a lot of positions that maybe some fans who don’t understand positioning think are a little boring, but there are going to be little mini-battles against the cage that will determine who wins and loses this fight. We both consider ourselves pretty decent within the tie-ups and stuff like that, so it’s going to be a dirty fight.

“It might not look the smoothest, but I think we’ll be pretty entertaining.”