When Tim Elliott got a call from the UFC he thought it would be to inform him of his release. Instead he got a new contract
By E. Spencer Kyte, on Twitter @SpencerKyte • Jul. 14, 2020

Tim Elliott’s phone rang, and he got a familiar uncomfortable feeling.

Less than two weeks earlier, Elliott suffered a second-round submission loss to newcomer Brandon Royval. It was his third consecutive setback and marked the second time he’d suffered such a fate in the UFC. His first three-fight slide came six years early with a unanimous decision loss to Zach Makovsky, and when the phone rang following that contest, the call was to inform Elliott that he’d been released from the promotion.

Sitting on the couch, the flyweight veteran looked at his buzzing phone, saw it was his manager calling, and thought he was about to find out he’d been released from the UFC for the second time in his career, but that wasn’t the case.

“I got a call from my manager and was like, ‘Well, this is it; I’m getting let go again,’ but they gave me a raise and a new contract,” said Elliott ahead of his return to action this week on Fight Island against Ryan Benoit. “I haven’t been in love with the sport the way I used to be lately — it’s been about trying to make some money — and now I got a new contract, and that kind of picked my spirits up a little bit.

“I also started training with some old training partners, too.”

Not long after his loss to Royval, Elliott’s daughter was heading back to Kansas City to visit family and rather than staying in Las Vegas and being separated from her, Elliott and his girlfriend, fellow UFC fighter Gina Mazany, hopped on a plane and headed to “The Show Me State,” where the former title challenger spent several weeks working with his close friend James Krause.

The combination of a new deal and reconnecting with Krause lit a fire in Elliott, a self-described nomad who admitted that his performance tends to suffer when he’s feeling too comfortable.

“Las Vegas is our home, but I felt like part of the reason I’ve been so down about fighting is I’m so comfortable there,” began Elliott, who went 3-0 under the Titan FC banner after being released from the UFC and earned his way back — and got a flyweight title shot — by winning the “Tournament of Champions” on Season 24 of The Ultimate Fighter. “I have great coaches there, great training partners, but I’m so comfortable in my own home, my own little bubble where Gina and I don’t go out and do much; we just hang out at our house, perfectly happy and content, in our comfort place.

“Then I had two fights in a row in Las Vegas where I stayed in my comfort place — I didn’t even go to the hotel at all — and it never really felt like a training camp. Now, I’ve moved away from my house, out of my comfort zone to where I’m staying in an AirBNB, training three times a day on a schedule James Krause is putting together.

“The same thing happened before when I lived her in Kansas City,” he added. “I would be in my little comfort area and I started getting antsy, which is when I started traveling to Las Vegas for my camps. Then I moved to Las Vegas, (Robert) Follis passed away, things changed, and I got set in my comfort zone again.”

Early in his return to Kansas City, another call from his manager came through, this one offering him an opportunity to compete this week against Benoit, a fellow veteran who has also struggled to find consistent success inside the UFC cage.

Though Elliott’s plan was originally to spend a few months training in Kansas City, return home to Las Vegas and then start looking for a fight, the man with the best mullet in the UFC didn’t waste any time accepting the bout after Krause said he liked the matchup.

It also didn’t hurt that there will be a ton of familiar faces there on Yas Island with him throughout the week. 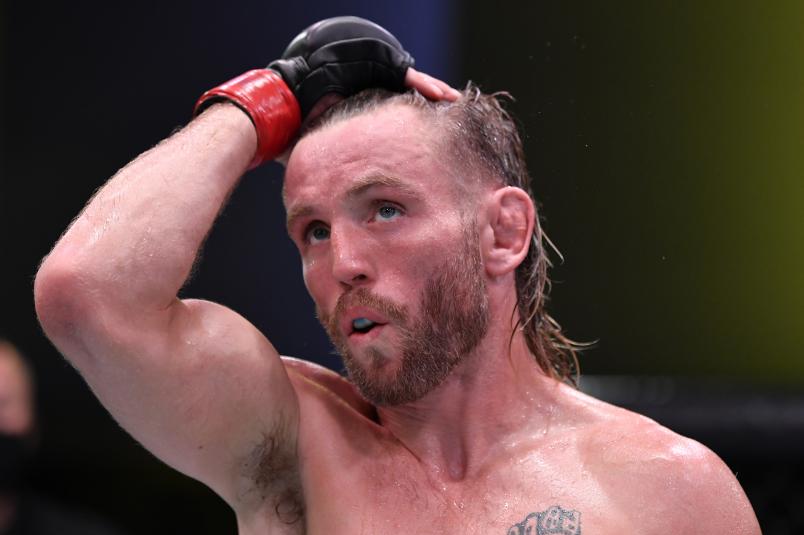 LAS VEGAS, NEVADA - MAY 30: Tim Elliott reacts after his submission loss to Brandon Royval in their flyweight fight during the UFC Fight Night event at UFC APEX on May 30, 2020 in Las Vegas, Nevada. (Photo by Jeff Bottari/Zuffa LLC)

LAS VEGAS, NEVADA - MAY 30: Tim Elliott reacts after his submission loss to Brandon Royval in their flyweight fight during the UFC Fight Night event at UFC APEX on May 30, 2020 in Las Vegas, Nevada. (Photo by Jeff Bottari/Zuffa LLC)

MORE FROM FIGHT ISLAND: Fight by Fight Preview | Fighters On The Rise | Ige Outworks The Competition | Benoit Feels At Home

“If James likes the matchup, then I like the matchup because he’s a genius when it comes to this sport,” Elliott said of Krause, who is still an active UFC competitor himself, but has made the successful transition into coaching, as well, over the last couple of years.

“Joe B. fights three days after I do, so those guys are going to be in Abu Dhabi anyway,” he said, referring to his teammate Joseph Benavidez and his coaches, Eddie Barraco and Casey Halstead. “It was easy for me to come down here, because Joe needs full corners the whole time because he’s fighting for a world title, and I need somebody that is going to be there with me the whole time, plus I’m still going to be able to see my regular coaches.”

Another of Elliott’s teammates, Cody Stamann, was added to the card late last week, as well, meaning it will feel even more like home than he originally envisioned.

Despite the rekindled passion and good vibes he’s feeling heading into this showdown with Benoit, the 28-fight veteran is well aware that he’s under a tremendous amount of pressure heading into Wednesday night’s event.

But rather than focusing on what’s at stake, Elliott believes that if he goes out there and has fun, he’ll get the result he needs.

“The pressure is still there, and even with a new contract after a Fight of the Night, that’s three losses in a row,” acknowledged Elliott. “I can only think of one or two people ever in the UFC who have kept their contracts after four losses in a row so, if anything, this is the most important, most high-pressure fight I’ve ever been a part of.

“James Krause tells me all the time, ‘If you got out and have fun, you beat everybody,’ and I haven’t had fun since… man…”

The line goes silent for a second as the veteran scrolls through his resume in his head, trying to find the last time he was excited to be stepping into the cage and approached a fight as a chance to have some fun.

“The most fun I ever had was when I got cut by the UFC and I went and fought for Titan,” said Elliott, who claimed the promotion’s flyweight title with a victory over fellow UFC vet Iliarde Santos before successfully defending the belt twice with wins over Felipe Efrain and Pedro Nobre.

“I had three really tough opponents and I had so much fun because all the pressure was off. I didn’t really give a s*** — I just wanted to go out there, have fun, and do cool s***.

“I’ve been so far removed from that track that I’m happy to be back there even though I’m sore and tired and beat up,” he added. “Everything seems to be coming around for me and if I can go out and have fun, everything else will take care of itself.”

It’s been a challenging year professionally for the all-action fan favorite, and a less than satisfying second tour of duty in the UFC as a whole.

A victory on Saturday won’t change all of that for Elliott, but it will ensure that a couple weeks after getting back from Fight Island, when he’s sitting on the couch and sees his manager calling, he won’t have to worry about getting that familiar uncomfortable feeling in the pit of his stomach again.