Tim Elliott: Winning's Not the Only Thing 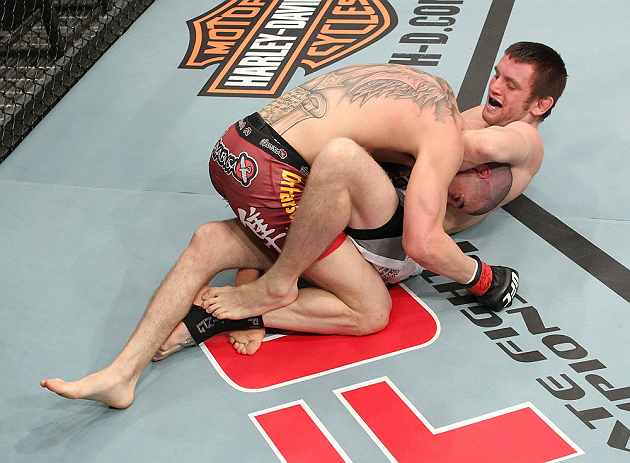 Winning isn’t everything, but winning bonuses is.

In a locker room at the IZOD Center in East Rutherford, New Jersey in the moments prior to UFC on FOX on Cinco de Mayo 2012, one flyweight making his Octagon debut on short notice had his entire perspective on his fight changed by none other than UFC President Dana White. Unbeknownst to White, the then 8-2-1 Tim Elliott, who was waiting to square off with The Ultimate Fighter 14 winner John Dodson, had prepared to use his wrestling to take Dodson down. But after White’s fiery speech, Elliott became a bonus hunting madman with desire in his heart and entertainment in his fists and feet.

“My game plan in that fight was to go out there and take him down, but Dana White came into the room to give his speech,” remembers Elliott. “He talked about finishing guys, he's talking about bonuses – and I threw my game plan out the window. I did everything he said by going out there and being exciting and trying to get bonus money. I was so amped up after his speech, I was almost in tears I was so ready to go. It gave me the freedom that I always wanted to do in a wrestling match, which was to punch, kick, elbow, and knee. I wish I could head butt; it would make it even more fun. He pushed me in the direction of throwing game plans out the window. Taking him down never crossed my mind; I was trying to knock his head off.”

The 26-year-old former high school state wrestling champion began his UFC career with a cartwheel kick, which he never practiced once, against arguably the toughest guy in his division. When Elliott’s in the cage, expect an unrelenting tornado of limbs with submission skills. If he had jitters, it wasn’t noticeable, as he went full-tilt on Dodson, easily taking the third round and giving the former number onr contender a run for his money in the second. Surprisingly, the two did not net the Fight of the Night bonus, which ended up in the hands of two other flyweights that evening.

“I thought it was an excellent fight,” tells Elliott. “I had a really good performance. I thought I did enough in that fight to win. Nobody knew who I was. I was just somebody who got called-in to fill-in for somebody. I think he kind of took me lightly. A five round fight would really play to my advantage. I'm always in shape. Even if I'm tired, I can still fight. I'm not going to get slower as a fight goes on. I kind of started off slow in that fight and I think that's what lost me that fight. He came out in the first couple rounds and was a lot faster than me, but I stayed at that pace the whole fight and he sort of died down some. I thought it was the best performance I've had to date.”

Included in that self-assessment is the follow-up fight against Jared Papazian in December 2012, won by Elliott via unanimous decision and in which he did snag that Fight of the Night check. “I felt like I got robbed of a good performance,” reveals Elliott, who has almost nothing positive to say about his first victory inside the Octagon besides being grateful for the bonus. From the pre-fight trash-talk and the antics of Papazian making Elliott feel more uncomfortable than revved-up, to the illegal knee thrown and landed by Papazian in the first round, Elliott has little fond memories of his second outing, although it was an exciting learning experience.

“Before the fight, I had some confrontations with Jared and later I found out he does that before all his fights,” admits Elliott. “It was really strange and it worked to his advantage in the fight. I didn't feel like I fought well in that fight at all. I know now it was just tactics. We've been in contact since and he seems like a nice guy. Taking that illegal knee, I got kind of rocked by that in the first round and I don't remember the fight after that. Having all that happen and taking the illegal knee is what won me the Fight of the Night. Had that not happened, I may have finished him really fast and not have won Fight of the Night. But comparing my Dodson fight and the Papazian fight, I think it was a mile's worth of distance between my performances. I feel like I've grown a lot from both fights. With the Dodson fight I had a great performance and the Papazian fight I overcame some adversity. ”

Up next for Elliott is a clash at UFC 164 in Milwaukee, Wisconsin against another proven bonus earner in TUF alum Louis Gaudinot. The New York native has gone 1-1 inside the Octagon, including an impressive guillotine choke of John Lineker (who has since won three straight) in May 2012. Gaudinot’s trademark green hair was a stalwart in the New Jersey regional scene and he captured a flyweight title before entering the TUF house as a bantamweight. The product of the Tiger Schulmann system is an all-around threat, with two wins each via KO, sub, and decision.

“I think he's a great fighter and a great person,” says Elliott. “His striking is very well-rounded. He'll probably have the edge on the striking and I think I'll have the edge on the ground. I think me and Louis have a great opportunity to win Fight of the Night and that's what I'm fighting for. I'm not just fighting to win; I'm looking for bonus money. The 125-pound division is so shallow that I think a dominant win here could get me a title fight. I don't know for sure. But that's the ultimate goal, to be champion. My plan is to go out there, beat him, be exciting, and get that bonus money. I'd really like to wait until the third round with about nine seconds left and get a submission, so that I can take my buddy James' stat as the second latest finish in UFC history.”

The “James” in question is newly-minted UFC fighter, coach/mentor/teammate/friend, and double bonus winning James Krause. At UFC 161, he stepped-in for an injured Isaac Vallie-Flagg to take on Octagon veteran Sam “Hands of Stone” Stout, a bout in which Krause won via sub with 13 seconds left, earning a FOTN and Submission of the Night. A friendly rivalry has been instigated between Krause and Elliott to see who can put on the most highlight-ready performance and their intensity is rubbing off on each other in training.

“We're kind of competing in the gym who can get the craziest, most exciting, and most dominant victories,” asserts Elliott. “We practice that way. He's walking around at 190 pounds and I spar with him more than anybody else in the gym. Not only is he my coach, my mentor, and I look up to him, but I think he looks up to me as well. I shored up a lot of holes in his wrestling game; when he came in he was just a striker. And he shored up a lot of holes in my striking game. We're helping each other out.”

To catch a glimpse of Krause going to war with this flyweight, one would need to hang out at Grindhouse MMA in Lee’s Summit, Missouri. The graduate of the University of Central Oklahoma has a couple of other unique training partners besides Krause. One is Elliott’s girlfriend and fellow 125-pound fighter Trisha Clark, who he credits with keeping his spirits up and his love for the sport in central focus. The other training partner is recent TUF alum Zak Cummings whose career thus far has been as a middleweight and who will be making his UFC debut as a welterweight this week at UFC Fight Night.

“I don't have little guys at my gym that I can go with because they can't go at the pace I like to go at,” states Elliott. “The good thing about going against guys like Zak Cummings and James Krause is that I can go 100% and go full-tilt and not worry about hurting anybody or getting upset. They do the same to me. They don't have to worry about hurting me or making me upset because I have no ego or worry about getting knocked out because that's part of the game. I go with the big guys. It tends to work out because whenever I go into the cage with a 125-pounder, I feel like there's nothing that they can do to me that's going to hurt me. I feel like I could go in there and fight Louis Gaudinot with no hands because his punches are not going to hurt me because I'm getting hit by Zak Cummings and James Krause every day.”

On August 31st in Milwaukee, Wisconsin, a frenzied flyweight fracas between Gaudinot and Elliott has its sights set on a little something extra with UFC President White’s name on it. “I'd like to get the finish, I'd like to get bonus checks, and I'd like to be exciting,” affirms Elliott, who is geared-up to leave it all in the cage to propel himself in both fans’ hearts and the UFC’s charts. “I have very little technique and probably very little skill, but it's not about technique - this is not a dance. It's about who wants it worse and who is going to go the hardest. Sometimes you get knocked out, but I'd rather get knocked out trying to finish or trying to be exciting than be a boring fighter.”