Tim Elliott Proud To Be A Flyweight

"Right now, the flyweights are as popular as they’ve ever been because there’s a lot of talk going on about the division."
By Thomas Gerbasi, on Twitter: @TGerbasi • Oct. 11, 2019

Number one flyweight contender and former Ultimate Fighter coach Joseph Benavidez was always fond of calling his squad “Strange Little Men,” and when talking to one of his regular training partners, No. 6-ranked Tim Elliott, the name seems apt, not just for Benavidez and Elliott, but for most of the 125-pound weight class.

It has nothing to do with their size or anything more bizarre, but the reality that in a “me, me, me” society, much of the UFC’s flyweight roster seem to be rooting for each other and the division to succeed.

“I’ve been doing this for a long time and I know I’m getting close to being on my way out, so I want the generations of guys behind me to be able to make a living and do this for real,” said Elliott. “It’s hard enough as a little guy to make money, but it’s gonna be even harder if there’s no flyweight division in the UFC.”

As Elliott rehabbed a knee injury that kept him on the sidelines since his December 2017 win over Mark De La Rosa, rumors swirled that the days were numbered for the UFC’s flyweight division. It wasn’t going to be a deal breaker for Elliott, who submitted De La Rosa at bantamweight and who has the frame to carry 135 pounds, but for his peers, giving up the size to fight up a weight class just wasn’t an option. Thankfully, Henry Cejudo did his thing at 125 and 135, and now the double champ has two weight classes to rule over. That’s good news for the flyweights. 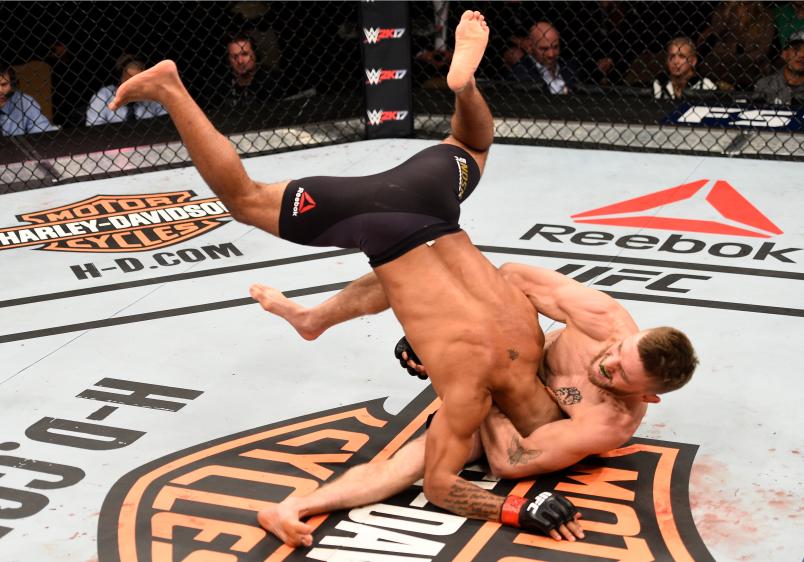 “It’s one of those things where if there’s no division, then there’s a certain amount of people that can fight, but it’s gonna be hard for them to make it to the UFC if there’s no weight class,” said Elliott. “Guys don’t want to have to fight in Japan or overseas to get a flyweight fight. The good thing is, with Cejudo being a flyweight, people were acting like the flyweights have no power and aren’t exciting, but Cejudo knocked out TJ Dillashaw and then went up and beat the best bantamweight in the world. It nullifies that argument that the little guys aren’t exciting. Right now, the flyweights are as popular as they’ve ever been because there’s a lot of talk going on about the division. Nobody knows what’s gonna happen and that’s exciting.”

What is gonna happen is that Elliott will make his return to active duty on Saturday against Deiveson Figueiredo, and it’s the kind of fight that could propel the 32-year-old Kansas native right into the race for a shot at “Triple C.”

“That’s one of the reasons why I called Deiveson out,” said Elliott. “Obviously Joseph Benavidez is the guy who deserves the title shot, and if anybody gets a belt, it’s gotta be Joe B. fighting for it. Obviously I know that, but I figure I could jump the line again like I did when I fought in The Ultimate Fighter house. I got to fight for the belt then, and now I’ve been out for two years and I’m getting to fight the number three guy in the world and I’m gonna beat him, so I’m gonna be the number three guy. So I’m looking at that title run now, it’s pretty serious and it’s pretty close. It’s within reach.”

And for those who appreciate fighters who have taken the long way to the top of the sport, Elliot’s tale is a feel-good story. Here’s someone who was released from the UFC in 2015 after a 2-1 start turned into a 2-4 slate, then came back to the promotion in 2016 after earning a title shot by winning the TUF 24 flyweight tournament, gave champion Demetrious Johnson a fight for five rounds, then battled back from a serious injury to be back in the mix in 2019. That’s someone who has paid his dues, but the best part is, Elliott feels like he’s finally hitting his stride.

“I’m gonna fight for as long as my body will let me,” he said. “I really enjoy fighting and I enjoy training and I feel like I’m just now getting good. I went years where I felt like I was fighting way over my potential and I exceeded way past what I ever thought was possible. And just now I’m finally coming into my own. I feel like a real professional athlete and I feel like that’s gonna show on October 12th.”

Don’t get nervous, though. This professional athlete is still going to fight like Tim Elliott.