When it comes to experience and knowledge of the fight game, Tim Elliott holds a lot of advantages over unbeaten Askar Askarov. But what he doesn’t have any insight on is what it’s like to have a 10-0-1 record like his UFC 246 opponent has.

“I’ve never been that 10-0 guy,” said Elliott. “I started my career with two losses and a draw, so I had to dig from that to get to the UFC.”

He’s not exaggerating, as it was quite a climb for the Wichita native over the last decade, especially when an 0-2-1 record in boxing is usually a death sentence that will hang over a fighter’s head forever. In MMA, it’s a little bit easier, but not much. And while the fighter may not be deterred from continuing, those around him may not be as encouraging.

“It was a rough start and a lot of people didn’t think it was for me,” said Elliott. “And I even kind of thought maybe that I needed to find something else to do. But I knew I had a little bit of a bad run and since then I put together some wins and fought some really good guys and had some really good fights.”

On December 11, 2009, Elliott fought for the fourth time as a pro and knocked out Victor Veloquio in 33 seconds. The 0-2-1 record was now 1-2-1, and the clouds had parted. He wouldn’t lose again until his UFC debut against John Dodson in 2012, a bout he still counts as one of his favorites, and along the way he made his name in the MMA world with a second-round knockout of former UFC lightweight champion Jens Pulver in 2011.

“It was good and bad in a sense,” Elliott said. “He (Pulver) was one of my favorite fighters and I was almost star-struck. So when I fought him it was hard, but that was big for me.”

Today, the 33-year-old isn’t the young gun anymore. He’s the veteran, the contender, the guy fighters like Askarov have to beat to get to the next level. Elliott is just fine with that breakdown of next weekend’s bout.

“It’s a good spot for both of us,” he said. “We’re totally different people – he’s a young guy coming up, 10-0, and I’m an older guy – just turned 33 – and I just lost my last fight. So it’s a good matchup and these are the kind of matchups there should be. He’s trying to climb up and he’s got to beat me in order to get to where he wants to be or needs to be.”

That covers where Askarov is as he prepares to head into Las Vegas. But where is Elliott? After a 2-4 run in his first UFC stint, Elliott won three straight and then earned his way back into the promotion in 2016 by winning season 24 of The Ultimate Fighter. That victory got him a shot at the UFC flyweight title then held by Demetrious Johnson, and though he gave “Mighty Mouse” a fight, he fell short on the scorecards.

Since then, Elliott is 2-2, with his most recent appearance seeing him get submitted by Deiveson Figueiredo in October. That one had to sting more than most, considering that Figueiredo is fighting Joseph Benavidez next month for the 125-pound crown vacated by Henry Cejudo. Elliott isn’t surprised at that turn of events; he expected it.

“I knew it was gonna be that,” he said. “I knew Cejudo wasn’t gonna come back down; there’s just no point in him coming back down and killing himself to make weight. It would be easier for him to call out Dominick Cruz or Urijah Faber. So I knew that Joe was gonna be the guy and that if I beat Figueiredo, I would get a chance to fight Joe. And I feel that I just got caught in that fight. But that’s the fight that should be happening and Joe B. deserves it and Figueiredo deserves it and I think that Joe B. is gonna come out and be the champ.” 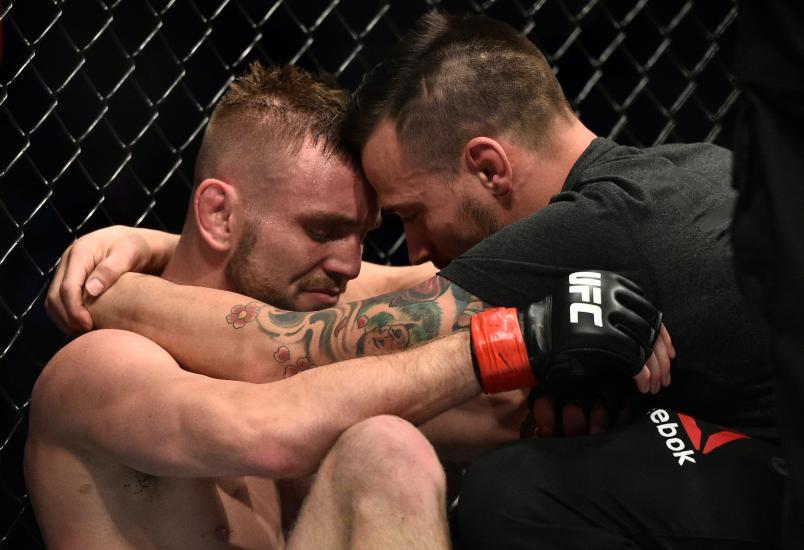 When Elliott makes his pick for the February 29 bout, he does so not just as a fellow flyweight who knows both from his fights with them, but as a friend and training partner of Mr. Benavidez. It’s a friendship that found its roots before the two fought in 2014 as they actually cut weight together.

“He’s super funny, a super genuine guy and we always got along,” said Elliott. “Then we fought each other and immediately after we always saw each other and were cool, and then on The Ultimate Fighter we became friends and we’ve been friends since.”

Today, Elliott and Benavidez both live and train in Las Vegas, and Elliott has never forgotten what his former foe did for him during the reality show and beyond.

“He (Benavidez) is my friend and he helped me get to where I am,” he said. “He coached me on The Ultimate Fighter, he picked me first, put me in a good spot in the brackets and helped me win The Ultimate Fighter and got me a world title fight. So I owe a lot to him. We train a lot together and he’s been a true flyweight, a guy that’s been around forever and I’m glad that he’s getting the opportunity to finally get the belt.”

If this all sounds like a conflict for two fighters chasing the same goal, Elliott knows how it sounds to those outside the sport, but for him, it makes perfect sense. This isn’t a blood feud with a mortal enemy; it’s a competition between two buddies and may the best man win.

“I can see how it is (weird) for some people, but for me it’s business,” he said. “I like to fight, and if me and him get to fight each other, it just says we’re both doing the right things because we’ll be fighting for a world title and our coaches are doing the right things and we have the right training partners. So, for me, it just means we’re both doing exactly what we should be doing and it would be perfect. I don’t take it personally and I don’t take the fight outside of the cage with me. Everything is about trying to put on a good show, trying to have fun and trying to make some money.”

Yet nothing happens in terms of title shots or a possible rematch with Benavidez (or Figueiredo) without Elliott first getting by Askarov. And though he has the edge on his foe on paper, he has to turn up and perform on fight night.

“I think that I fought better guys than this and I fought higher level guys than this,” he said. “But I’m one of those fighters, I have a certain style that it makes me dangerous in the sense that I know I can beat the very best guys in the division but, at the same time, I can lose to the guys that aren’t the best guys. It’s one of those things – you live by the sword, you die by the sword.”

That’s what makes Tim Elliott Tim Elliott, though. And he’s as determined as ever that what started out with question marks will end with a definitive and positive answer.

“This is the best time ever to be a flyweight,” he said. “Finally, there are things happening. Real flyweights are gonna fight for the belt, there’s a lot of good guys in the division right now, all the flyweight fights have been really exciting lately and there’s some undefeated guys, so it’s lit a new motivation to try to get that belt. And a win here with Askar and one or two more wins, it could be me and Joe B. fighting and, for me, that’s a storybook ending. So if I got to fight him for a world title, for our team and for him and me, win or lose, it couldn’t happen any better way for me. That’s exactly what I want to happen and that’s what we’re working for right now. But it starts with Askar Askarov.”