When the pandemic hit, a lot of fighters were going online asking for fights. Not Tim Elliott.
By Thomas Gerbasi, on Twitter: @TGerbasi • May. 26, 2020

UFC flyweight contender Tim Elliott lives life like he fights. Just when you think he’s going to zig, he zags, and vice versa.

This was never more evident than when the COVID-19 pandemic hit and put his day job on pause. At first, he was all-in on fighting whenever the UFC returned, but then…well, why not let him tell you.

“I try to go against the grain, so if everybody's getting online talking about wanting fights, I kind of quieted down and started training,” said Elliott. “Since the pandemic started, I saw every single fighter in the UFC and out of the UFC and every fighter that's ever been in the UFC going online, and now all of a sudden they're ready to fight. I didn't want to be one of those guys.”

And he wasn’t. Sure, it wasn’t the ideal situation in terms of training, especially for Elliott, who moved from Missouri to Las Vegas to have access to the UFC Performance Institute, but he’s an old-school fighter who made use of what he could in order to be ready for when fight cards started being booked. That’s when he made his call to manager Jason House.

“As soon as my team started to get some training in, I knew that something was gonna come around and I knew being ready was going to be important,” he said. “So as soon as I told my manager that I was gonna be ready, he had fights coming my way.”

Not surprisingly, Elliott said yes to everybody, finally coming up with someone who said yes back in the form of Octagon newcomer Brandon Royval. It’s fight Elliott is looking forward to, not just because it’s a fight, but because it promises to be a good one, even without a crowd in attendance.

“Not having that is gonna be a little bit different, but it's a fight and this kid's good,” said Elliott. “He's dangerous and it's gonna be exciting. That's what I like about it. I'm not gonna have to go look for this guy, he's not gonna run from me. He's gonna meet me in the middle and mix it up and those make for the best fights for me.”

“Chaos” would be an apt middle name for the 33-year-old, who is no stranger both to the unique situation he and his peers are fighting in these days and to the reality of fighting in a virtually empty house, having won season 24 of The Ultimate Fighter. The way he sees it, that’s put everyone on a level playing field in the lead-up to their bouts.

“We're all in the same boat,” he said. “Nobody's getting anything extra that anybody else isn't. The only difference is which guys were sitting around doing nothing and which guys were trying to get better.”

Elliott falls in the latter category as he looks to snap a two-fight losing streak, and while he’s the rightful favorite going into Saturday night’s bout, the No. 11-ranked contender knows that edge in experience can sometimes be a double-edged sword.

“It goes both ways,” explains Elliott. “Yeah, I have the experience, I have a lot of time in the Octagon, but at the same time, he has a lot of tape that he can study on me against the best guys. He can watch me fight the (former) champ (Demetrious Johnson), he can watch me fight John Dodson, he can see me fighting the best guys in the world. Whereas with him, I only get to see the two guys that I know in his whole group that he's beaten or fought. I only know a couple of those names. So yeah, I have the experience level, but this kid has a lot more stuff to watch.” 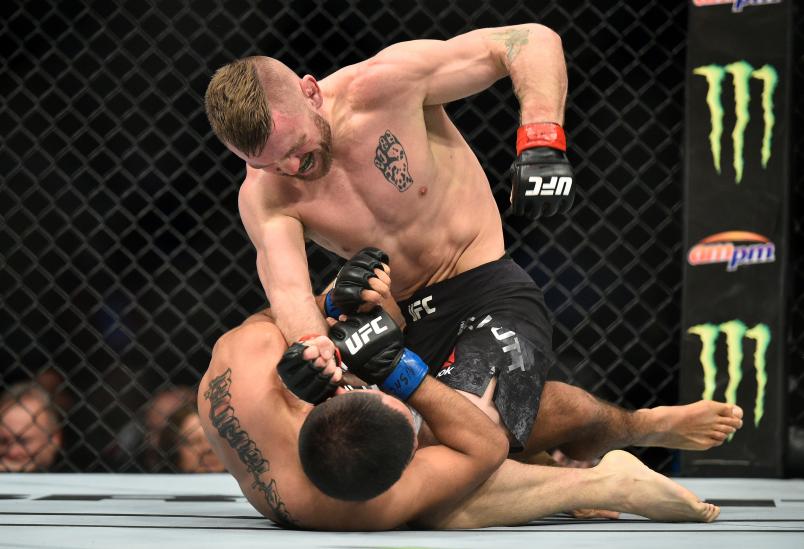 Then there’s the whole no-crowd thing. Most fighters say it’s no big deal. Elliott, again, is not most fighters.

“I'm used to fighting in front of thousands of people and he's not and now we're going into a fight where there's not gonna be any fans,” he said. “So he's not gonna get that, 'Aw f**k, this is a UFC fight, there's thousands of people here and everybody's watching.' It's gonna be like a gym fight for him, and that's a disadvantage to me. I like the noise, I want to hear people or have them throw s**t at me. I like that; I thrive in those situations. When it's quiet and kind of like a gym scenario, I don't do quite so well. I like the bright lights. But I do have some experience with the quiet fights - I had four wins on The Ultimate Fighter where I fought four weeks in a row with no fans and no crowd.”

Wait a minute, when were people throwing things at him?

Elliott laughs, referring to some of his early pro fights in Oklahoma.

“I don't mind being the guy getting cheered for or the guy being booed,” he said. “I just like the people there. I do better when people are watching. It's like my one chance to finally go out there and do what I'm good at and I want people to see it.”

Well, people will see it, especially with UFC Fight Night being the only major sports event on television this Saturday. There’s got to be something to be said for that, right Tim?

“I do like that,” he said. “I like that we're finally in the limelight with the UFC. We're above all else right now.”