"I definitely believe that if somebody has that killer instinct in them
and they know how to tap into it, they can beat anyone in there." - Tim Boetsch 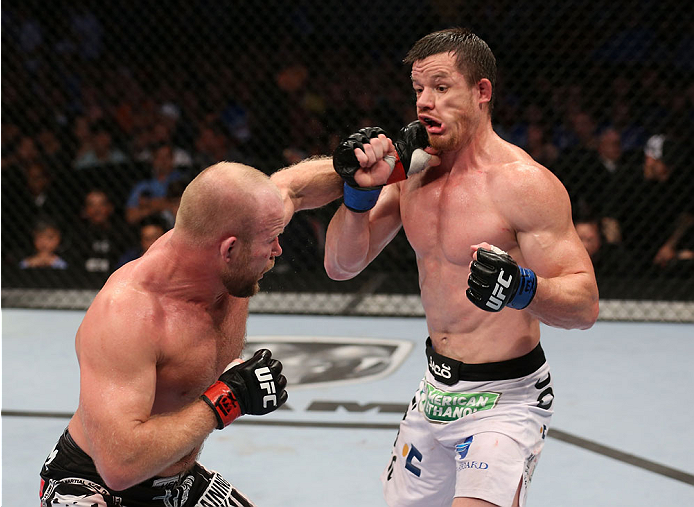 Any married man will tell you that in nine out of 10 cases, his wife is right. It doesn’t matter if it’s about politics, music, religion, or sports, if the Mrs says it, you can usually take it to the bank.

So when Tim Boetsch’s wife Jade gave her two cents on her husband’s 1-3 run in his last four fights, the middleweight listened, and what she told him was the equivalent of what Mickey told Rocky in Rocky III – he got civilized.

“My wife has been telling me that for a long time,” Boetsch laughed. “She knows me best, and several times she told me that I’ve been thinking too much, and to be honest, she’s right. I’m a fighter, and in the Octagon I don’t need to be a thinking man; (Laughs) I just need to get in there and fight, and that’s when I’ve done my best, when I go with my instincts, fight hard, and look to take people out. And that’s something I need to embrace.”

In other words, Boetsch has to once again be “The Barbarian,” the guy who threw David Heath around in his UFC debut in 2008, kicking off his Octagon career with a bang heard throughout the MMA world. And to help get that guy back, he decided that a switch from Matt Hume’s AMC Pankration team in Washington was in order, and with his fight this Saturday against Brad Tavares taking place in his home state of Maine, the timing was perfect to reconnect with his family, go to a place with spotty cell phone reception, and get down to what he calls some “Rocky training” with former UFC standout Marcus Davis.

“The venue is an hour away from where I grew up as a kid, and obviously I’ve had some mixed results out in Washington the past few fights, so I kind of reevaluated my career, reevaluated where I was in life, and this gave me an opportunity to train and see my family, which is very important to me,” Boetsch said. “Having to be away from home for the past five or six years training out in Seattle is a huge sacrifice, and it took time away from everybody. But being able to train and actually see my folks in Maine and get some great work in with Marcus Davis, it seemed like it all made sense, and I’m glad to have the opportunity to do it for this fight.”

It’s been an interesting year for the 33-year-old Lincolnville native. 5-2 at middleweight in the UFC entering 2014, Boetsch was coming off a controversial win over CB Dollaway and two losses to Mark Munoz and Costas Philippou, but before that, wins over Yushin Okami and Hector Lombard had him in a good spot in the contenders’ race. A win against Luke Rockhold at UFC 172 in April would have put him right back among the elite, but in a little over two minutes, the former Strikeforce champion submitted Boetsch, and the veteran middleweight waited for the call he hoped he wouldn’t have to field.

He got a call, but it wasn’t the one he was expecting.

“I had to do a lot of soul searching after my last fight,” Boetsch said. “I actually expected to get a phone call saying ‘good job in the UFC, you had a good run, but it’s time to move on.’ But that’s not the call I got. I got the call saying ‘hey, you got another shot and it’s going to be in front of your hometown crowd.’”

Just like that, Boetsch had been thrown a lifeline, and not only was he keeping his job in the UFC, but his next fight was going to be in Maine. Funny what one call can do for your mood.

“After hanging up the phone, my brain started going ‘this is my shot, this is the last opportunity to make it happen,’ and I’m not the type of person to give up on my dream, no matter what adversity I deal with, so to have the opportunity to relight the fire and do it in front of my friends and family up here in Maine, I decided to take a new approach to it,” he said. “Marcus and I had done some training together earlier in my career, and I think he understands me as a fighter. That rawness that got me to the UFC is something I need to embrace, and we’ve been training hard and working toward that and I feel great coming into this fight. I think it’s an awesome opportunity and I’m ready to take advantage of it.”

The question is, can Boetsch go back to being the raw rookie who just shows up to scrap, strategy be damned? He believes he can, and he points back to the Heath fight as the blueprint for what he needs to do.

“My first UFC fight, I fought David Heath and he had a major experience and technical advantage,” Boetsch said. “But I was the guy who came out and had confidence in my abilities and just went in there and made it a fight. I dropped those bombs and threw everything but the kitchen sink at him and I definitely surprised a lot of people by coming out with a win. So I definitely believe that if somebody has that killer instinct in them and they know how to tap into it, they can beat anyone in there.”

It’s an intriguing idea – mix Boetsch’s talent and experience with a raw aggression that put him on the map in the first place. If he pulls that off against Tavares this weekend, it could be the dawning of a new age for Tim The Barbarian.

“That’s the beauty of it,” he said. “I have the experience now, I fought a lot of the top guys in the sport that have a lot of experience, and I definitely strayed away from that rawness. But that’s something that’s always in there. When somebody has that instinct to get in there and take people out, that’s not something that goes away. Sometimes you just have to remind yourself of that, and that’s what I’ve been trying to do this whole camp, is get back to my roots. I feel like everything’s just flowing together better now.”

The timing is perfect. New coach, new team, old attitude, and the right place. It can almost make Boetsch shrug off the inevitable questions of whether this is a “must win” fight for him. It is, but at this level, every fight is a must win, especially if you want to challenge for a title some day. So Boetsch knows those queries are on the way this week, but he’s not bothered by them. All he’s focused on is bringing the hometown fans a win.

“You know it’s something that’s going to come up, people are going to ask it, and you’ve got to just brush it off,” he said. “If you let your mind dwell on it, that becomes your focus. I already went through the rollercoaster of emotions after my last fight and I was expecting a bad phone call, but when I got this awesome phone call, it’s a matter of just driving on, and that’s what I’m gonna do. I’m training hard for this fight and I know if the Tim Boetsch of old shows up and does what he’s trained to do, and unleashes that “Barbarian” in the cage, there’s going to be no issue at all, and everybody’s going to come away from this event saying ‘holy cow, Tim Boetsch is back.’”