"I think this fight with Mark is gonna put me right back in the mix." - Tim Boetsch 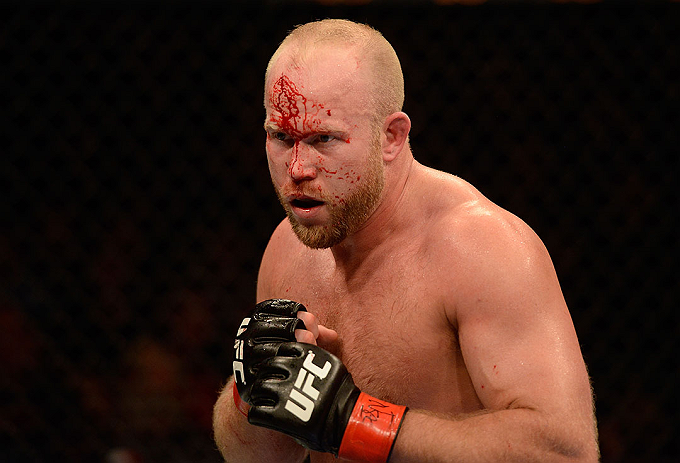 Everything was going right for Tim Boetsch heading into his UFC 155 bout with Costa Philippou last December. He was unbeaten in four fights at middleweight, wins over Yushin Okami and Hector Lombard had him on the short list of 185-pound title contenders, and with a victory over Philippou, his road to a championship fight would grow even shorter.

But then the fight happened, and everything that could go wrong for “The Barbarian” did. He hurt his right hand, he inadvertently got poked in the eye, and then got cut by a clash of heads. But what may have bothered him the most was seeing a long streak – not of wins and losses, but something else – hit the skids.

“The one thing that really clicked in my mind in there was as Philippou was hitting me with some ground and pound, he broke my nose and I felt the bones crunch into my face,” said Boetsch, revealing one of the odd thoughts that can pop into your head in the heat of battle. “I thought, ‘aw man, come on.’ I really didn’t want my nose broken in fighting. I picked the wrong career (Laughs), but that was one of the things on my mind.”

In the third round, Philippou stopped Boetsch with a series of strikes. It was Boetsch’s first defeat since 2010 and the first time he was TKOed since 2008. But even with all the obstacles placed in his way on fight night, he has no excuses.

“Going into that fight I was very confident,” he said. “I had a great game plan, knew what to expect, or thought I knew what to expect going in there. And for me, disappointment and frustration were the two leading emotions after a fight like that, especially after being on a tear like I was, beating some of the best guys in the world, and then going in there and dropping the ball. That was really frustrating for me. But I take those fights in stride and believe everything happens for a reason.”

The apparent reason? To teach him that even when things go south, you’ve got to keep your mind right and stay cool.

“I learned that even though I can weather quite the storm, I need to be able to weather even more in the ring and not let it affect me and not let it break my focus,” he said. “And that’s something I’ve been really training on since that fight, not losing that mental focus and the understanding of what I need to do to win.”

This Saturday, Boetsch gets to put what he’s learned into action against a fellow wrestler also coming off a punishing loss – Mark Munoz. On paper, this is one of those knockdown, drag ‘em out fights that will undoubtedly see some blood, sweat, and tears shed before the final bell. It’s what Boetsch and Munoz signed up for, and what they both likely expect. That doesn’t make it any easier for their spouses to deal with though.

“Fortunately she had somebody giving her the play-by-play of the fight and wasn’t watching that last one live,” said Boetsch of his wife Jade. “And she still hasn’t watched it to see just how much of a bloody mess I was. But she understands that I train hard, I’ve got great coaches, and I’m doing what I need to do to hopefully prevent that from happening again. But at the same time, she understands what we’re putting on the line every time we get in there, so she’s okay with that risk, as long as I bring home the reward and get that win. She gets more upset when I lose because I’m down and bummed out; I feel like I’ve wasted a training camp. But she enjoys when I get home and I’m fired up from the win and all that stuff. She knows this is the career I’ve chosen, she supports me a hundred percent, and she knows that there are some bumps and bruises that go along with it. It’s just part of the career choice.”

Especially for wrestlers, guys who are used to the grind of competition and willing to go to whatever lengths are necessary to get the ‘W.’ It’s why when Boetsch, a Division I wrestler for Lock Haven University, filled out his UFC bio form for this fight, he made specific mention of Munoz’ NCAA Division I National Championship for Oklahoma State, saying that someone who earned that title “is probably the toughest athlete on the planet.” That’s some statement to make, but as Boetsch explains, it’s not a far-fetched one.

“For people who haven’t wrestled, it’s hard to explain what the daily grind for a wrestler is,” he said. “People talk about cutting weight for fights, but we’re fighting once every three or four months, and some guys are fighting once or twice a year at this level, so it’s easy to focus on the weight cutting aspect when you only have to do it a couple times a year. But in collegiate wrestling, guys are cutting substantial amounts of weight, and they’re often doing it twice a week. So you’re going through this grind of hard practices while you’re starving. You’re probably dehydrated to some extent, and the practices are just grueling. That’s part of the meanness of the coaches at the NCAA Division I level. (Laughs) They make you mentally tough and push your body through what you should be able to work through, and then you have these guys that are absolutely rising to the top and becoming champions and dominating people. And in a wrestling match, there are no breaks in there. It’s a hard fought battle from start to finish. So to do those things under the physical conditions of starving and being dehydrated, it takes a super mentally tough person to get through that. My heroes in sports have always been wrestlers: Dan Gable is the number one guy that comes to mind. He would just beat everybody, he expected to beat everybody and then later in life with the athletes he coached, he just had this expectation for them to win under those adverse conditions. So for me it’s a no brainer; wrestlers are the toughest guys out there.”

You can’t get a better endorsement than that, but it doesn’t mean Boetsch is going to be too reverential to Munoz on fight night. Or reverential at all for that matter. With “The Filipino Wrecking Machine” coming off a knockout loss to Chris Weidman that preceded a yearlong layoff, the Maine native will be seeking a statement making victory, the sooner the better.

“I feel really blessed that it’s worked out this way,” said Boetsch of getting a big fight immediately after the loss to Philippou. “Even before I knew I had the Munoz fight, I considered my last loss just a speed bump, and I needed to open my eyes on a couple things, but I really didn’t feel like it set me back that far; it may have just slowed me down for a moment. But I think this fight with Mark is gonna put me right back in the mix. He’s a tough opponent, he’s been ranked in the top ten for a really long time for good reason, and a big win over him sets me up for exactly where I want to be.”

That’s right back in the title hunt, and with the possibility of a divisional shakeup should Weidman upset champion Anderson Silva this weekend on the same UFC 162 card, the 32-year-old Boetsch could move forward even faster toward his dream opportunity to become a world champion. So when you ask him how he keeps that ol’ wrestling meanness, he laughs.

“It never left me. I went to college, got a scholarship to wrestle, and had been a four-time State champion, so when I went to college I had very high expectations for myself and I had a lot of goals in college that I wanted to reach and I didn’t. My college wrestling career was not nearly as successful as I had hoped, and I think that provided the fuel and that need to continue to compete and continue to push myself after college, which led me to a very successful fighting career, and things have just worked out perfectly in my opinion.”