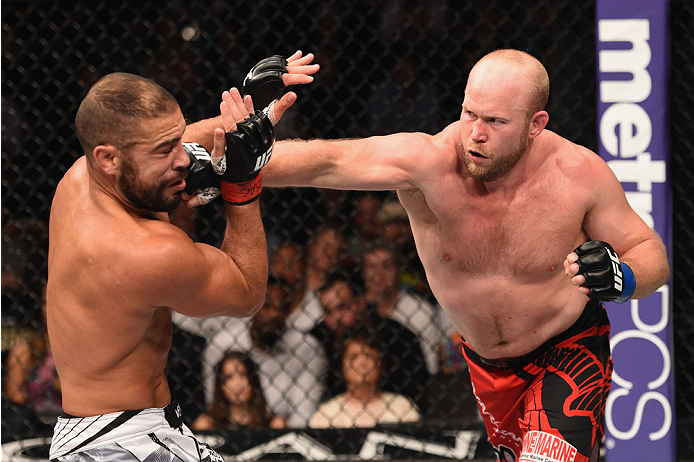 Tim Boetsch had a fight with Dan Henderson even before he knew he had it, with longtime manager Monte Cox jumping at the chance for his fighter to meet one of the sport’s most revered superstars this Saturday.

Given his history and competitive nature, you can easily get the impression that whoever UFC matchmaker Joe Silva called up with would have received a “yes” from Boetsch and Cox, and “The Barbarian” won’t deny it. In his world, when you’re a fighter, you fight. You don’t plot a path of least resistance to the title or cherry pick opponents on the way up the ladder. Will there be setbacks along the way? Inevitably, but when all is said and done, Boetsch can look himself in the mirror and know he put together a career well fought.

Not that the Maine native is looking for the exit anytime soon. On the contrary, the 34-year-old feels that he’s on the right track at 185 pounds, despite losing his last bout to Thales Leites in January.

“It (the loss) still eats at me but I can see a lot of the positive things that took place that night other than me getting choked unconscious,” he chuckles. “I went in there and executed the game plan, I made a couple mistakes and I paid the price for it. But leading up to that point, (Coach) Marcus (Davis) and I were very happy with my performance. My striking was better than it’s ever been, and I was happy to show that and get my first Fight of the Night bonus. It speaks to what Marcus and I are doing and what we’re going to continue to do, which is fight as hard as I can and put on a great show.”

It’s why he’s sitting in a main event bout against Henderson this weekend in New Orleans. The UFC could have reached into the roster bag and pulled out an entirely new bout for the headliner when Daniel Cormier was pulled out of his matchup against Ryan Bader to fight for the light heavyweight belt last month. But instead, the promotion elevated Boetsch-Henderson to the main event at the Smoothie King Center, and for a man entering his 17th Octagon bout, that’s a milestone to remember.

“The UFC has a lot of faith in us and expect us to put on a good show, so for me it’s a big deal, and I’m very excited that I’m finally getting the chance to be a main event,” Boetsch said, and being that this main event is against a legendary fighter like Henderson, it’s even better. That doesn’t mean he’s going to be standing in awe of “Hendo” when the bell rings.

“When I first started, at my first couple UFCs, I would see guys and I was like ‘whoa, that’s one of the guys that’s a really big deal in the sport,’ and may have been a bit star struck,” Boetsch said. “But that has definitely changed over the last 15 fights I’ve had since then, so at this point, Dan is a legend, but I’m not going to be star struck when I’m in the cage with him.”

The reason is simple – Boetsch has been aiming for a fight like this ever since he graduated from Lock Haven University and strapped on four-ounce gloves.

“Some of my training partners early on in my career told me I was crazy because I started talking about beating legends early on in my career, and to now finally have the opportunity to do it kind of validates where I was coming from way back then when I was telling the guys that this was part of my plan,” he said. “I said I’m going to be fighting these guys some day and I’m going to be beating them up. So now it’s time to put my money where my mouth is, I guess.”

Boetsch vs. Henderson is a worthy main event bout, one pitting two hard-nosed, aggressive fighters against each other with plenty on the line. For Boetsch, it’s an opportunity to move back up the middleweight ranks. For the 44-year-old Henderson, there’s even more on the line, as a 1-5 stretch in his last six may have him looking at some hard decisions should he lose this weekend.

That’s the Henderson storyline leading up to the bout, but where does Boetsch fit in that scenario? What if he’s the guy who hands the beloved veteran the loss that prompts him to retire? That can’t be an easy thing for any fighter to deal with, but it’s a part of the sport not talked about much. Boetsch has thought about it.

“I thought about that, and somebody has to do it, and if anybody had to do it, I wouldn’t mind because I’m fighting Dan Henderson with one hundred percent respect,” Boetsch said. “I respect everything he’s done throughout his career, I respect the inspiration that he’s been to me and many other fighters. He’s done everything a young fighter could ever hope to do and he’s a legend for a reason. So if I were to be the guy that retires Dan Henderson, what an honor that would be for me and I would send him out on a high note. I’m not saying that’s what’s gonna happen, but it would be nothing but respect from me towards Dan Henderson.”

It’s the classy response you expect from Boetsch after a tough question. Yet on the flip side, there is still a fight to be fought, and just because Boetsch respects Henderson, that doesn’t mean he’s expecting anything less than the best the H-Bomb swinging vet can offer.

“It’s obvious that he’s getting towards the end of his fighting career, just because he’s up there in age, but if you take Dan Henderson lightly, you’re setting yourself up for failure, because if he’s anything, he’s tough,” Boetsch said. “He’s always been tough and he always will be tough and that’s one of the things I really looked up to him for, is his ability to get hurt and come back and win fights. And for me to go in there and think that I’m just gonna take advantage of this guy would be a big error on my part. So I’m preparing for Dan Henderson in his prime.”