"I don’t want to get involved in the whole thing of talking and picking
fights. I’m just going to beat people up and I’m going to earn that
title shot." - Tim Boetsch 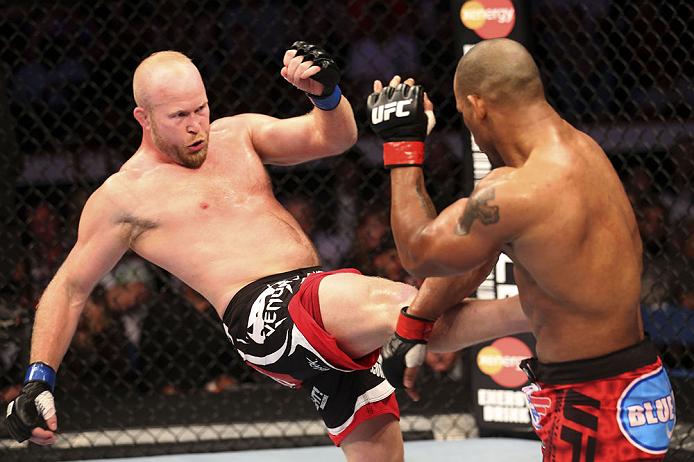 The middleweight division continues to become increasingly competitive. Over the past two years, while Anderson Silva’s reign atop the 185-pounders has endured, the race to fill out the weight class’s upper tier has ignited into a firestorm.

A handful of the world’s best fighters have set their sights on earning a shot at “The Spider’s” throne, yet while other top 185 pound fighters have fallen into the surging trend of call-outs and trash-talking, Tim Boetsch let his fists do the talking. It is a course of action which may have cost “The Barbarian” in raising his profile in the minds of the UFC’s fan base, but he has every intention of continuing to make ground. The wrestling standout from Maine intends to continue his climb the only way he knows how, and while he may be overlooked in the bigger picture, Boetsch is determined to show and prove.

“All my opponents seem to look past me,” Boetsch said. “That has sort of been the formula, but I’m okay with that. If they feel like I’m a walk in the park I’ll let them be surprised when that cage door closes and it’s time to actually work things out.

“It is kind of funny how everyone is jumping on the train and trying to talk themselves into fights when perhaps they haven’t earned it yet. But I think I’m doing things differently. I’m getting in there and I’m beating lots of top level guys. I think my resume speaks for itself. I don’t want to get involved in the whole thing of talking and picking fights. I’m just going to beat people up and I’m going to earn that title shot.

“I’m kind of confused how I can be so easily forgotten, but there is going to come a day when I’ve beaten enough guys that it is going to be very hard to ignore me. If I keep taking out top guys, how can my argument be denied?”

Following a highlight reel come from behind victory over Yushin Okami UFC 144, Boetsch upped the ante on his title bid by collecting a win over Hector Lombard. He spoiled the longtime international star’s organizational debut, snapping Lombard’s 25 fight unbeaten streak in the process. The victory over the Cuban-born powerhouse boosted Boetsch’s position in the divisional rankings and set up a potential number one contender’s bout against Chris Weidman.

While the showdown between two of the division’s best was originally slated for UFC 155, the surging prospect turned contender suffered an injury and was forced to withdraw from the bout. Rather than remove Boetsch from the card, the UFC tapped another fighter building momentum in the division, Costa Philippou. A win over the Ray Longo product will not carry the same amount of clout a victory over Weidman would have produced, but Boetsch is a game fighter prepared for whomever the UFC places in front of him.

“I was pretty bummed out, honestly,” Boetsch said about the Weidman cancellation. “I was really looking forward to the fight with Weidman because it would have really established who the number one contender is. That being said, I also feel for Chris. He’s had a rough year. He had issues with his home due to Hurricane Sandy and trying to get his house fixed. Now he has an injury and a major recovery to deal with. I wish him all the best and hope he has a very speedy recovery.

“I was very happy the UFC got a replacement relatively quickly. They obviously came up with a very tough opponent, and Costa has been on a tear lately. I expect it to be a tough fight. He’s showed some very good hands and definitely has stopping power in them. He knows how to throw combinations well. It is not an easy fight by any means and I definitely have my work cut out for me. I’m very happy he’s going to be in there and was willing to take the fight.

“I don’t want to ever be one of those fighters who complains about opponents or turns down fights because it is not the right opponent for me. I think this fight against Costa speaks volumes of what type of fighter I am. I’m a sports entertainer. My job is to fight and perform for the fans. That means I need to fight whoever the UFC tells me. If they tell me I’m fighting Costa Philippou – guess what? That is who I am fighting, and on fight night I’m going to show up and give it my best.”

The bout features two fighters with proven finishing ability. Where both men carry heavy hands, Philippou’s boxing skills and Boetsch’s wrestling talents are most likely to wage the battle which decides the fight, and ultimately, it is a fight Boetsch cannot afford to lose.

Despite being undefeated in the middleweight division since deciding to drop down from light heavyweight at the end of 2010, Boetsch understands his overlooked profile doesn’t afford him some of the same luxuries enjoyed by his peers. The Maine native believes it will only be a matter of time. As long as he keeps putting on impressive performances which land him in the win column, the path to the top of the division will become clear.

“People will figure it out pretty soon,” Boetsch said. “Every fight is huge to stay in the title hunt and I know this especially rings true for me. I’m sort of the forgotten contender, and if I happen to lose, that certainly is a massive strike against me. I feel like maybe some of the other guys out there could get away with a loss and it could be chalked up as a bad day. I can’t have a bad day. I need to be perfect. I have to make sure I keep this win streak alive. I’m currently undefeated at middleweight and I’m looking to keep it that way.

“I’m bringing fireworks and I believe we are going to bring in the New Year very explosively. I’m looking to prove a point that I am the number one contender.”