Tim Boetsch: Changing the Definition of a Must-Win Fight 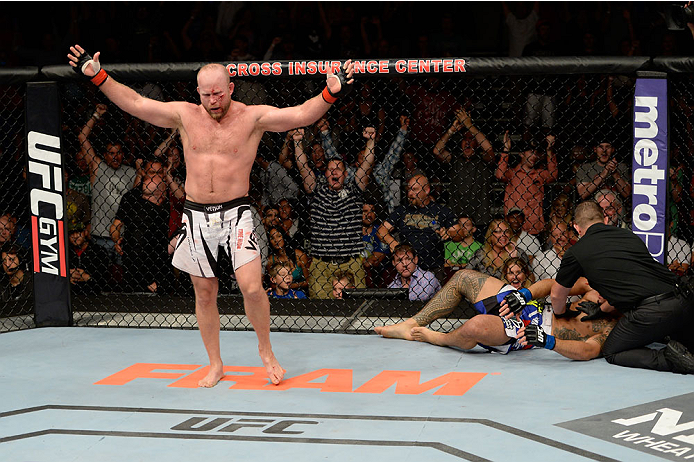 Tim Boetsch can breathe a little easier these days. Following a decisive second-round finish of Brad Tavares last August that broke up a 1-3 string, “The Barbarian” doesn’t have to answer the age-old question presented to guys who are 1-3 in their previous four fights:

“Is this a must-win situation?”

Boetsch laughs, understanding of those who have to ask that question, but glad that it won’t be the only topic of conversation as he returns to the Pay-Per-View main card for a Saturday bout against Thales Leites at UFC 183.

“It’s better, but I honestly feel like most of these fights are a must-win situation,” he said. “That never really changes for me.”

That’s a great attitude to have, especially when winning a fight doubles your paycheck. If that’s not motivation, what is?

“I’m definitely in a different situation from the last fight, but I want the other half of my paycheck,” Boetsch said, comfortable in the position he’s in at the moment, but far from content. For the 34-year-old, who currently sits at number 13 in the current middleweight rankings, it’s time to make a run, and he got that run off to a good start against Tavares, a bout that marked his first fight ever in his native Maine.

“It was pretty incredible from start to finish,” Boetsch said of that night in Bangor. “Being close to my hometown, working with Marcus (Davis), everybody was just excited. They were excited to see me, they were excited to see Marcus, and obviously with the way the fight went, the place was just nuts. I think back to my fight with (Yushin) Okami in Japan as one of my favorite fights, but that was obviously replaced by this one, and I think it’s going to be tough to beat the overall experience and how everything went down in that fight with Tavares. It was a heck of an experience.”

Better than the experience of winning a world title if that’s in the cards someday?

“I think with the support and everything I had, I’m never going to have an entire arena of people cheering my name and just flipping out for ten minutes straight, even if I were to win a title,” he said. “So that experience is never going to happen again, I understand that, and I’m just very blessed that I was able to do that.”

That doesn’t mean there can’t be more good times though, and Boetsch is eager to see if he can make some more positive memories when he faces the surging Leites, who has won seven straight, four since returning to the UFC after a four-year absence. Most notably, the Brazilian has ended his last two wins over Trevor Smith and Francis Carmont via knockout, showing that the jiu-jitsu black belt can crack a bit too. So if there was supposed to be an emotional letdown by Boetsch after the highs of his win in Bangor, he’s not feeling it.

“Thales makes it easy (to stay motivated),” Boetsch said. “This is the guy I’m going to be fighting who is looking to take me out. He’s not a guy that will cruise through and win on points. Typically, when he’s in a fight, he’s looking to finish guys. Recently he’s found some confidence in his striking ability, so I expect him to go in and try to take my head off. When you’re locked in a cage with a guy like that, it’s easy to find motivation because if you don’t train motivated and your head’s not in it, you’re gonna go in there and you’re going to get hurt, and that’s not on my list of things that I want to do. So I find motivation pretty easy and all around me to get ready for these fights.”

And while Boetsch-Leites is an interesting matchup simply because the winner will likely move into the top ten at 185 pounds, it’s also compelling because Leites and Boetsch have both altered their fighting styles as they’ve gotten older. Leites received no end of criticism for a style seen as safety-first in his initial Octagon run. Boetsch came tearing out the gates during his first UFC stint, but when he came back a little over a year later, it seemed like “The Barbarian” had become civilized. His wife Jade and new coach, UFC veteran Marcus Davis, made sure that didn’t last too long. But even new habits are sometimes as hard to break as the old ones.

“It’s a difficult thing, and it’s hard if you don’t have people around you that are gonna put you in check,” Boetsch said. “Fortunately, my wife is one of those people who is very blunt about what I need to do to be successful. (Laughs) She knows what makes me tick, and obviously she’s been around me long enough to know how I perform well and the person that I am. When I can unleash that barbarian side that’s in there, I have a lot more success. She’s been the biggest advocate for me just being a savage in there and that seems to be what works best for me. Throughout your career you have those ups and downs and you go through different cycles. Obviously when you first start, everything’s kind of new and you want to become something, so you go and seek out coaches that are going to take you where you think you want to be, but sometimes you gotta remember who you are at your core, and embracing that, for me, is very important.”

The “old” Boetsch showed up to Bangor last summer and the result was a much-needed win and his first post-fight bonus as a member of the UFC roster. Now it’s time to take that momentum and run with it, something Boetsch is more than willing to do.

“Honestly I feel like I’m right back where I need to be and where I want to be,” he said. “Part of being a fighter with any type of longevity is that you’re gonna go through those ups and downs, and it’s the guys that see the end goal and keep that in mind and don’t lose heart and keep driving toward that goal that are gonna be successful. I feel like this is my time right now. On the 31st, I’ve got a huge opportunity to really set myself apart and really let people know that I am in the hunt for the title and that I’m capable of snatching it from whoever’s holding it when I get there.”