Tim Boetsch - Bringing The Bully Back

"I need to go in there with the mindset that I’m gonna put the guy away,
regardless of what it takes. That’s the mentality I’m bringing back for
this fight and I’ve got more tools to do it now.” - Tim Boetsch 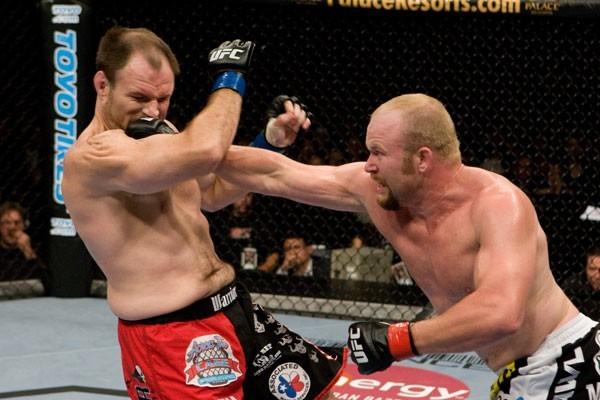 “You was hard and nasty. You had this cast iron jaw. But then the worst thing happened to you that could happen to any fighter. You got civilized.”

When trainer Mickey Goldmill told Rocky Balboa in the third installment of the classic “Rocky” film series that he had gotten civilized, it’s an idea that probably resonates pretty strongly with Tim Boetsch.

Entering the Octagon on less than two weeks notice to face David Heath at UFC 81 in February of 2008, Boetsch lived up to his nickname of “The Barbarian” as he imposed his will on his opponent before rag dolling him to the canvas and knocking him out in the first round.  In terms of instant fan adulation, Boetsch was Jon Jones before Jon Jones.

Yet just two months later, Matt Hamill and Colorado’s high altitude brought Boetsch back to Earth. He would split his next two bouts, with a loss to Jason Brilz forcing a release from the UFC. Three wins on the local scene brought him back, but he wasn’t the same fighter in decisioning Todd Brown, and then came a second round submission loss to rising star Phil Davis last November.

“The Barbarian” had become civilized.

“I really didn’t understand what I had actually done in there,” said Boetsch of his memorable UFC debut more than three years ago. “I heard a few people say Tim Boetsch is really raw and he needs to keep that rawness. And at the time, I really didn’t understand what that meant. I had to come around full circle, and I hit a couple camps after that where we really worked hard on the technical side of things and I tried to become a technical thinker in fighting, but that’s just not me. I need to go in there with the mindset that I’m gonna put the guy away, regardless of what it takes. That’s the mentality I’m bringing back for this fight and I’ve got more tools to do it now.”

This fight is a Saturday meeting with Kendall Grove at UFC 130 in Las Vegas. For Grove, it’s a familiar setting – coming off a loss and fighting with the determination that he will win and stave off the executioner’s axe again. For Boetsch, it’s a new day, not only attitude-wise, but weight-wise, as he is preparing to make his middleweight debut. Surprisingly, he still sounds pleasant before a weight cut he hasn’t had to make since his days as a wrestler at Lock Haven University.

“I was hoping I could get by without having to go back to it, but as fate would have it, I had to go back to my roots and the weight cutting and the miserable feeling of being dehydrated and all that,” he says with a chuckle. “But they say nothing good comes easy, so I guess this hard work and the effort of cutting weight is hopefully the right path and good things are on the horizon.”

The decision came after the Davis fight, one in which Boetsch admits that everything was going according to plan up until the bell sounded. So instead of looking for excuses for his fourth defeat in 16 outings, he looked into the mirror and decided a change of divisional scenery was in order.

“Everything in camp and training, physically and mentally, felt spot on,” he said. “So to go into that fight and not come out victorious kinda made me go to the drawing board and try to figure out what I could have changed and what I could do differently. And really, the only thing that came up was to drop the weight and make the cut to middleweight, so that’s what I did.”

And with the 20 pound drop also came a realization that despite all the things he had learned (and was still learning) from trainer Matt “The Wizard” Hume, one thing was still missing, and he went back into his studies of Bruce Lee’s Jeet Kune Do to find it.

“A lot of JKD and Bruce’s philosophies center on self-expression through fighting and I want to get back to my roots,” said Boetsch, 29. “When I first turned pro and started fighting I was able to really be kind of a bully in fights and throw guys around and that was just part of my style. It isn’t necessarily JKD or Bruce Lee’s style, per se, but it was my self-expression as a fighter. I was going in there raw and just powering through people and I think the drop to middleweight will better allow me to do that.”

How has Hume reacted to such intentions?

“He doesn’t like it,” Boetsch chuckles. “We always have a gameplan, but people always say you can have the perfect gameplan until you get punched in the face. We’ve studied the tape and Matt has obviously picked apart Kendall’s style and found all his weaknesses, so I certainly have an awareness of all those things and I’m not gonna forget about them, but I’m not gonna panic if I go in there and everything doesn’t happen the way that we trained. I’m gonna fight my fight and be victorious.”

Already, Boetsch has noticed the difference in training camp in Kirkland, Washington, not only because of the mental return to his early days, but because of life at middleweight.

“I am certainly noticing differences, and all my training partners, coaches and everyone around me definitely see differences,” he said. “I’m really happy that I made the choice to cut because everything just works better. I’m more efficient as a fighter, I’m able to do my techniques more smoothly and quickly, and I’m real happy with where I’m at and what I’ve seen.”

In Grove though, the 6-0 Boetsch not only faces a stylistic quandary in the 6-6 veteran, but he will be facing one of the most resilient fighters in the organization. Just 3-3 in his last six bouts, Grove nonetheless has an uncanny ability to follow up disappointing wins with career-saving victories, and if Boetsch’s math is correct, the Hawaiian should be in top-notch form following a December loss to Demian Maia.

“I think if you look at how things have gone in his last few fights, this one coming up is one where he brings his “A” game,” he said. “I’m expecting a real tough fight and I’m expecting him to show up with the killer instinct that he’s fighting for his life and his job. I expect to fight the best Kendall Grove that anybody’s seen to date. But with that being said, I plan on putting him away.”

That sounds like “Barbarian” talk right there, and it’s where Boetsch needs to be before the latest “biggest fight” of his career if he wants to recapture the buzz he had after the Heath fight. And if he does that, the middleweights have someone new to worry about.

“I certainly feel like where I’m at right now is the best I’ve been in my professional career as a fighter and I feel like I’m only getting better,” he said. “I certainly don’t feel like I’ve peaked. I’m as strong as I was at light heavy, I’m faster, and just all-around a better athlete. So I’m real excited. I think I’m gonna open a lot of people’s eyes on the 28th and I’m excited to get in there and do it.”