Till, Taisumov Impress On Rotterdam Prelims 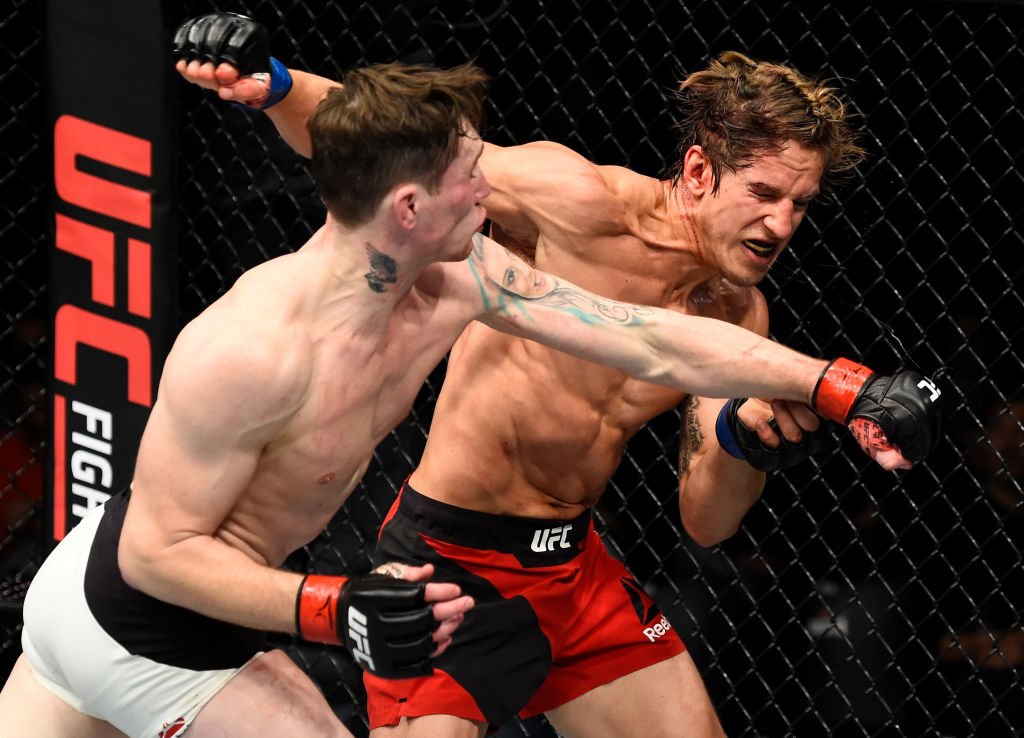 Till took his time to find his range in the opening round, and with under three minutes left, he found it, nearly finishing the fight with a left elbow that put Velickovic on the deck. Velickovic weathered the follow-up attack, got back to his feet, and he was able to make it out of the round.

Velickovic got back in the fight in round two, as he battered Till’s lead leg with kicks. The Liverpool native still held a slight edge, though, thanks to his punches both on the feet and the mat.

In the third, Velickovic continued to surge, but a left by Till produced a second knockdown. Again, Velickovic shook off Till’s attempt to finish, but the damage had been done, with the final tally on the scorecards reading 30-27 across the board for Till, now 15-0-1. Serbia’s Velickovic falls to 15-5-1.

Just like that, @Taisumov155 FLOORS Silva in the first round!! #UFCRotterdam

Russia’s Mairbek Taisumov wants a top ten contender at 155 pounds, and it may be impossible to deny him after his fourth consecutive win and knockout, an 84-second finish of Felipe Silva.

There was a brief feeling out process before Taisumov made quick work of Silva, landing a flush right hand to the chin as the Brazilian advanced. Silva fell face-first to the canvas, prompting referee Leon Roberts to halt the bout at 1:24 of the first frame. 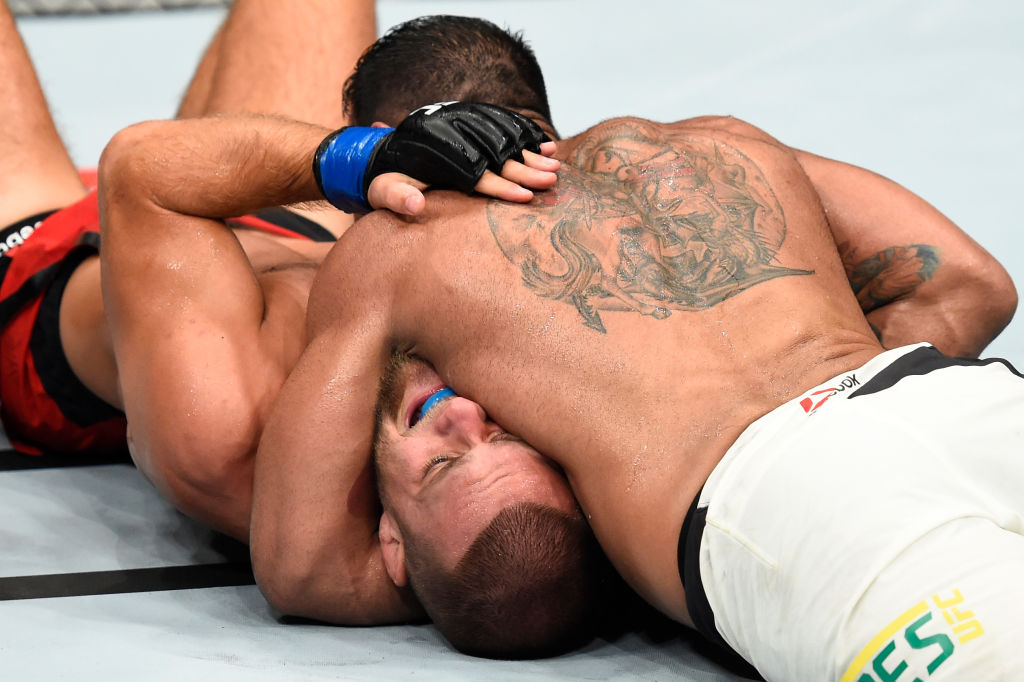 After no finishes for over four years, Brazil’s Michel Prazeres made it back-to-back submission wins in Rotterdam, as he picked up a third-round victory over Danish newcomer Mads Burnell.

Prazeres, who finished Josh Burkman in his last fight, when back to his swarming and smothering ground attack in this one, grounding Burnell and keeping him there for much of the round. Burnell had a little success with his striking early in round two, but as Prazeres was in range, it was back to the mat for another ground control clinic.

In the third, it looked like more of the same, but this time, Prazeres moved from the top spot and into the north-south position, where he sunk in the choke that ended the bout at 1:26 of the final round.

Belem’s Prazeres, who missed weight for the bout, moves to 23-2 with the win. Husum’s Burnell falls to 8-2. 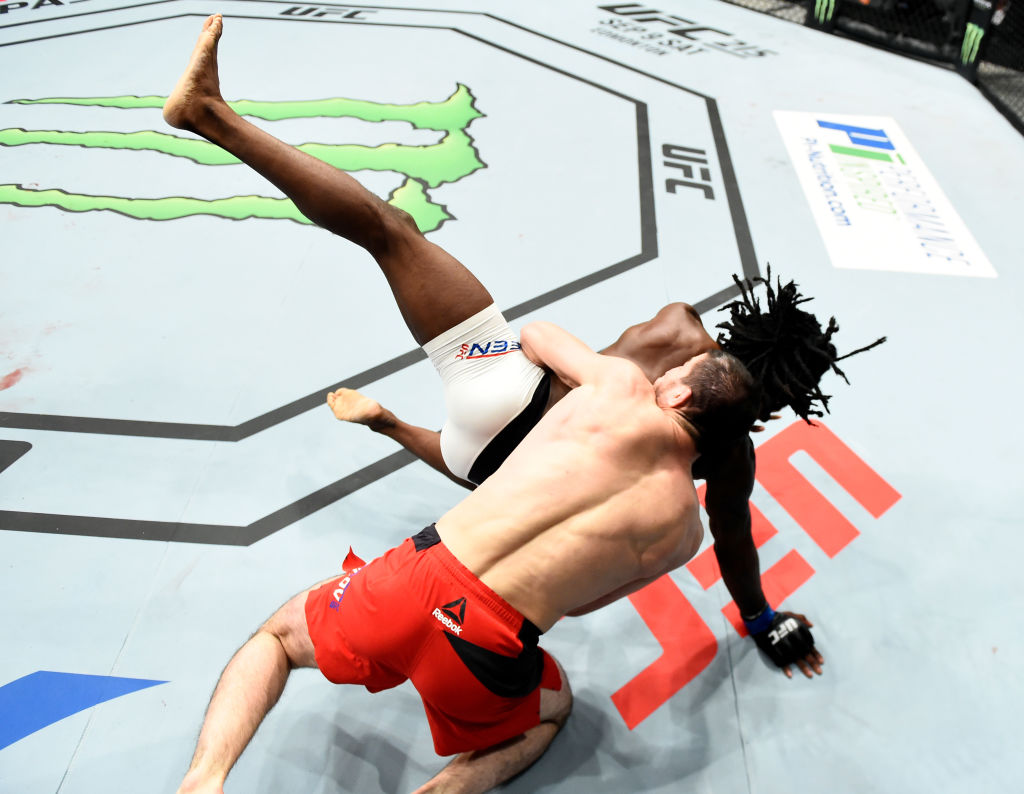 Lightweight veterans Rustam Khabilov and Desmond Green put together a back and forth battle before Khabilov emerged victorious via unanimous decision.

The fight began with some heated exchanges on the feet, but once Khabilov got close, he began setting up his trademark suplexes and takedowns. Green never stayed down for long, but the throws were scoring points.

Green adjusted in the second round, with a hard right hand discouraging Khabilov’s first takedown attempt of the frame, and he continued to keep the fight on the feet, but Khabilov kept pressing the action, and that aggression allowed him take the nod by scores of 29-28 twice and 30-27. 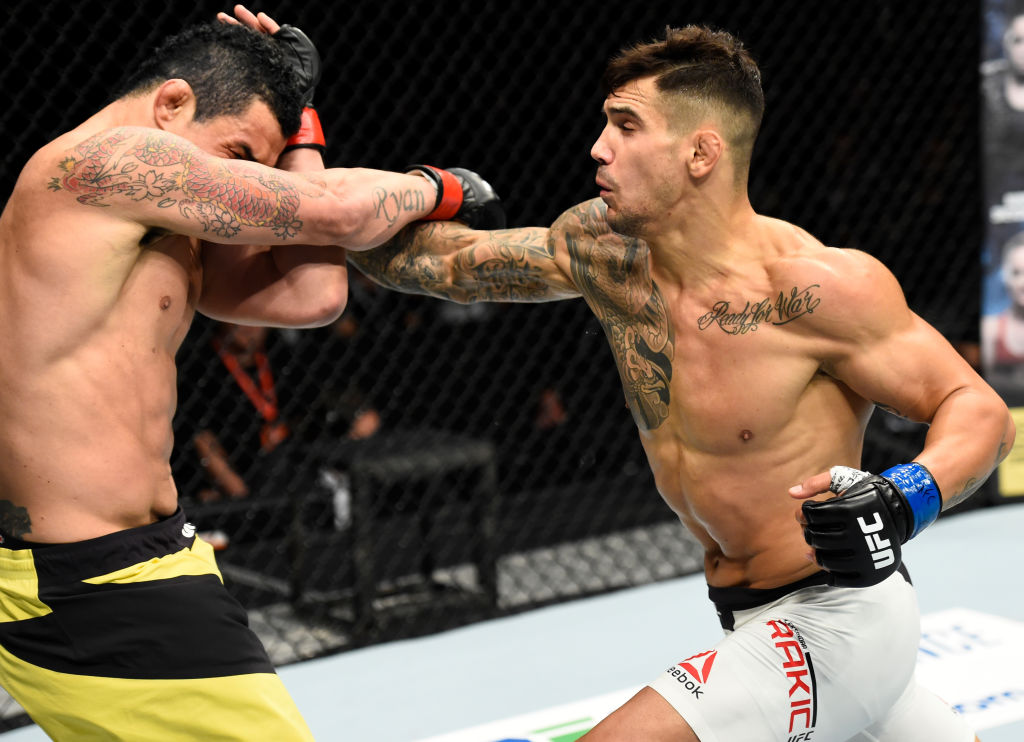 Austrian light heavyweight prospect Aleksandar Rakic made his UFC debut a winning one, as he scored a three round unanimous decision over seasoned Brazilian competitor Francimar Barroso.

The two 205-pounders took turns teeing off on each other with power shots throughout the first five minutes, Rakic holding the edge, but Barroso (19-6, 1 NC) getting in his share of flush blows as well.

Rakic (9-1) opened the second with a hard right hand, and it was also clear that his kicks to the legs were starting to wear the Brazilian down. After taking some more blows, the veteran took the newcomer to the mat, but when Rakic rose, it was more of the same until another late takedown from Barroso.

Staying upright in the final round, Rakic was able to pepper his tiring foe and log another frame, and the judges were on board, deeming the Vienna native the winner by identical scores of 30-27. 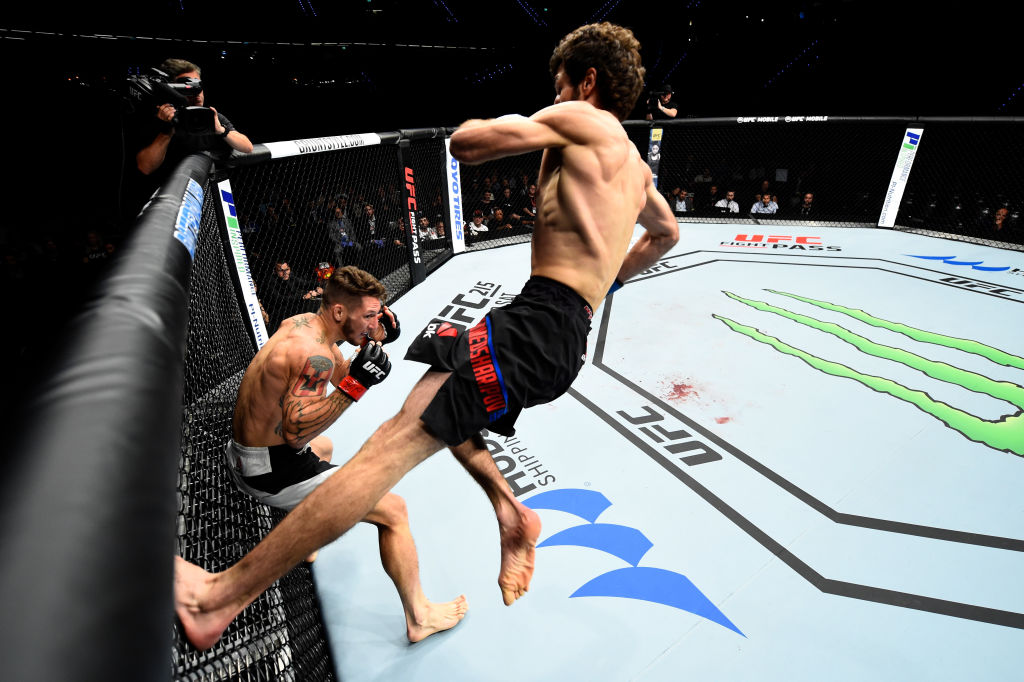 The featherweight division looks like it has a new rising star, as exciting Zabit Magomedsharipov debuted in the UFC with an impressive second round submission of fellow newcomer Mike Santiago.

Magomedsharipov likely made plenty of fans in the opening round, as he showed off a dynamic array of strikes that included spinning kicks, stiff jabs and even a kick off the fence a la Anthony Pettis. Santiago hung tough, even getting his opponent’s attention with a pair of hard body kicks, but it was clearly Magomedsharipov’s round.

The bout hit the mat for an extended spell early in round two, and Magomedsharipov controlled matters there as well as he sought a choke. Eventually, after a patient attack, Magomedsharipov found Santiago’s neck and a rear naked choke prompted a tap out from the Chicago product at 4:22 of the second stanza.

Dagestan’s Magomedsharipov moves to 13-1 with the win; Santiago, who took the bout on short notice after a win on Dana White’s Tuesday Night Contender Series, falls to 21-10 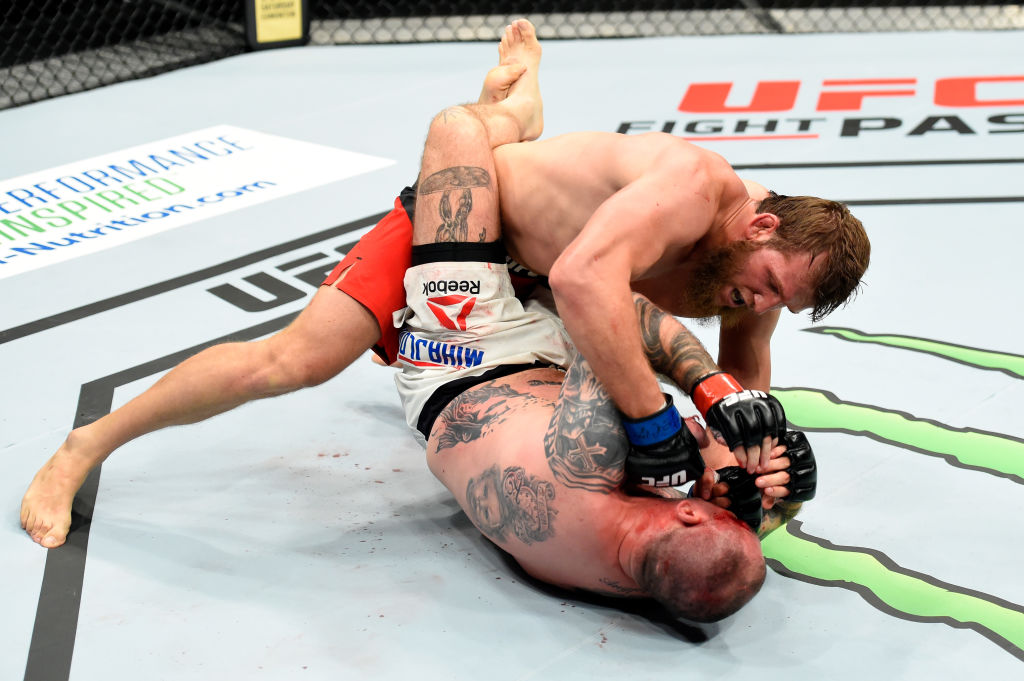 Russian newcomer Abdul-Kerim Edilov dominated in his highly-anticipated UFC debut, as he stopped Serbia’s Bojan Mihajlovic in round two of their light heavyweight bout.

Grozny’s Edilov (17-4) was in control from the start, and he never let up on the game, but overmatched Mihajlovic (10-6). He appeared to be on the verge of a TKO win in the opening round as he followed up some impressive kicking attacks with a ground-and-pound assault that bloodied his foe. And while Mihajlovic survived the first frame, Edilov didn’t let him out of the second, as more ground-and-pound finished matters. The official time of referee Kevin Sataki’s stoppage was 2:32 of round two. 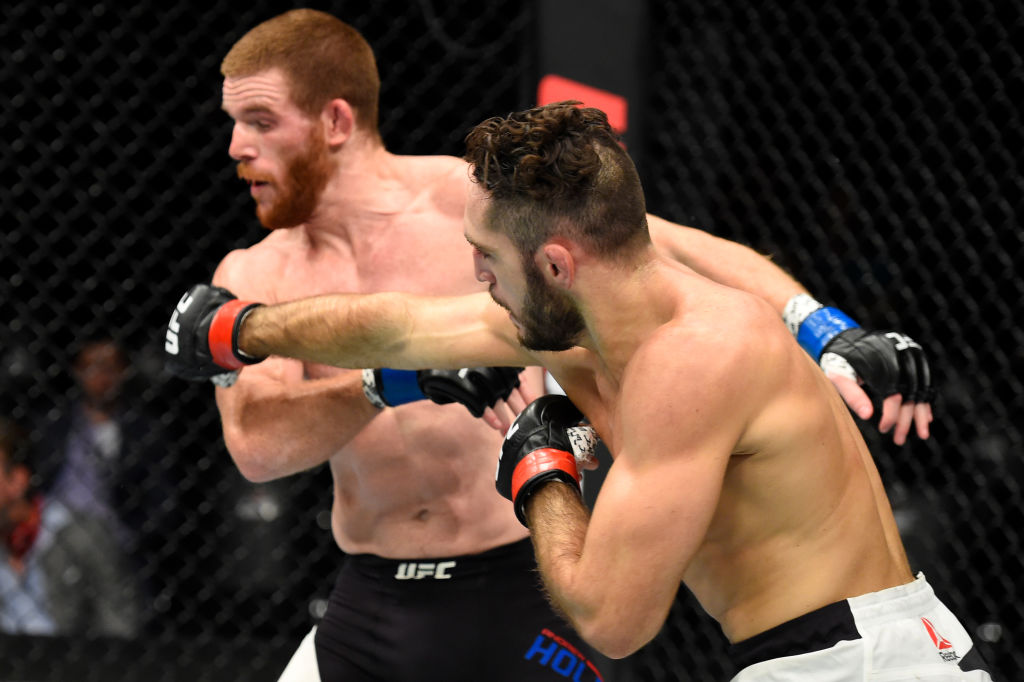 French lightweight Thibault Gouti got his long-awaited first UFC win in his fourth try, halting Andrew Holbrook in the first round.

After taking several solid shots from Holbrook, Gouti acclimated to the fight and began teeing off on the American. A right head kick dropped Holbrook, and while the Indiana native momentarily recovered and got back to his feet, Gouti kept the pressure and punches coming, with referee Neil Hall halting the bout at 4:28 of the opening round.