Till: I Am The Future 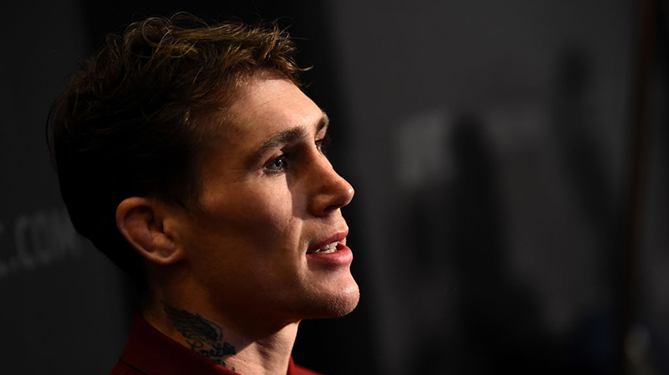 Darren Till of England talks with members of the media during the UFC 228 ultimate media day on September 6, 2018 in Dallas, Texas. (Photo by Josh Hedges/Zuffa LLC/Zuffa LLC via Getty Images)" align="center" />Transitioning from prospect to top contender usually takes some time, but for welterweight title challenger Darren Till, the rise to the top has been fast and furious.
And the undefeated fighter wouldn’t have it any other way.
Saturday will be Till’s fifth UFC fight since May 2017. In that stretch he’s defeated Donald Cerrone in emphatic fashion and won a close battle over two-time title challenger Stephen Thompson.
Till knows that taking the belt from champion Tyron Woodley would solidify his name in the history books and add to his legacy.
When the two crossed paths at the UFC’s 25th anniversary press conference in Los Angeles, Till felt that both fighters displayed mutual respect for one another. Both are going to be prepared for war on September 8th.
“When you’re around me, when you see me, when you see how I carrying myself there’s no way you can disrespect me. I’m not the type of guy who will stand in front of you talking s***. I respect Tyron, he respects me as a fighter,” Till said.

"He’s a champion looking at me as just a little dog snapping at the heels of a Rottweiler, famous saying in Liverpool there. I ain’t no little dog." - @DarrenTill2 is fired up for his title shot #UFC228 pic.twitter.com/i0LVKhaETG
— UFC News (@UFCNews) September 6, 2018

“He’s a champion looking at me as just a little dog snapping at the heels of a Rottweiler; famous saying in Liverpool there. I ain’t no little dog. I’m gonna come in there and I’m going to bully him, I’m going to bully that title out of his hands. And that’s how I see it.”
When asked why he thinks Woodley labels him as the toughest match-up in the division, Till was quick to say that he was most difficult match-up for any welterweight due to his overall skill set.
“I haven’t just got a fight IQ and I’m clever, I’ve got that power, I’ve got that movement, I’ve got that timing,” Till said. “I’ve got it all. I know I’ve got it all, I’m not chattin’ s*** I’ve just got it all.”
Till spent a good amount of the training camp for this fight at the UFC Performance Institute in Las Vegas, NV. Till’s head coach, Colin Heron, believes that the quality and intensity of this camp has propelled Till to new heights.

.@DarrenTill2's coach @Kaobon_Gaffa believes that we are about to see "the best Darren Till so far" on Saturday night. to find out why #UFC228 pic.twitter.com/CcnmcPpPpi
— UFC News (@UFCNews) September 6, 2018

He’s always very focused but I’ve never seen him this focused,” Heron said. “I’ve never seen him so advanced with his diet, he’s super lean. I’ve never seen his timing on point as much as we’re going to see in this fight. You always know good timing good space control, but this time it’s gone through the roof. The levels he’s at now, this is the best Darren Till so far.”
During camp Till has followed his philosophy: “Strengthen what’s weak and what’s already strong”. It’s that mentality that makes his confidence so real and believable.
“There’s no doubt he’s going to be champion of the world. In his head it’s as clear as day there is no doubt at all,” said Heron. “All this is coming together with his physical fitness, with his abilities, with his attribute but mentally he’s percent on point.”
As for the fight itself, Till is excited. He can’t wait to show the world how much he’s grown as a fighter and to begin his reign as champion of the welterweight division. Don’t worry, he isn’t overlooking Woodley, or the fact that “The Chosen One” has defended his belt twice. Till just truly believes that this is his time.
“He’s a lot better since his last fight. Forget about the time off; he’s better than his last fight. Every fight we evolve, every day we evolve so forget the past. It’s all about the future. The future is me and the future is September 8th.”