Before Darren Till soared up the welterweight ladder and into a main event slot in his hometown of Liverpool against Stephen Thompson this Sunday, there were Terry Etim, Paul Taylor, Paul Sass, Mark Scanlon and Jason Tan. All represented the city in the UFC, making it a hotbed for British MMA and a place where a dreamer could dream, as long as he or she worked hard and believed.

Till was a dreamer, a believer and a doer. He was a teenager who liked to scrap and had the tools to do so on more than just a local level. And as he trained in Colin Heron’s Kaobon Gym, he watched those who were already fighting internationally for the UFC, with none more promising than Etim, who posted a 6-5 Octagon record from 2007 to 2013 that included four Submission of the Night bonuses. Till watched, and he knew he would get to the UFC.

“I definitely knew one day it was gonna be me,” Till said. “I didn’t want to be like him (Etim), I just looked up to him and everything he’s done just inspired me because of how hard he trained and his mental attitude. I had the chance to spar with him and test myself and he’ll always be one of my top idols. No matter what I do in my life, I’ll always say that Terry’s an idol.”

Etim will be in Till’s corner this weekend, a fitting tribute to one of the city’s MMA pioneers, and he will likely be a calming presence for the 25-year-old, who is the talk of the town before the biggest fight of his career. So what is it like for Till to be the most popular man in Liverpool at the moment?

“I don’t think I’m the most popular,” he laughs.

“Definitely in the top five. (Laughs) But I like it. I just like basking in my success. I’ve worked hard for a lot of years, I’ve sacrificed a lot of things, so I love it when people come up to me and my own people – Scousers and Liverpool people – are cheering me on and supporting me. I do really like it and I can’t wait until after the fight, just to chill with friends and family and have a beer.”

Till has earned this spot with not just hard work and sacrifice, but his performances. A 16-0-1 record leads the way, but it’s the way he’s won that made him the only choice to headline the UFC’s first visit to Liverpool. Aggressive and always in search of a finish, Till’s first headlining assignment in October was an eye opener as he blasted out perennial contender Donald Cerrone in a little over four minutes. Now, all those boasts he’s made don’t seem so outlandish anymore.

“I don’t know where it comes from, but I just believe in myself,” he said. “I’ve got this crazy, insane belief and it could even be delusional at times, but I’ve just got that belief that I’m the best and no one’s gonna beat me and I’m gonna do great things. I know everything I’ve said up to now has come true, and hopefully it continues like that. Look, the harder I train, the luckier I get. (Laughs) That’s a quote I’ve heard a few times and I do like it because it’s true.” 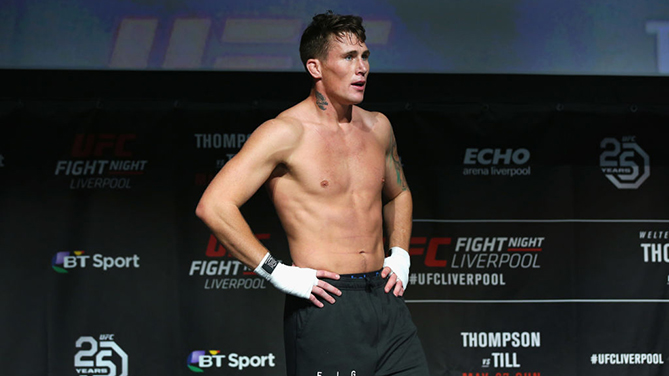 That candor adds to Till’s appeal. In front of the cameras or behind the scenes, he’s just one of the lads, and while he’s gotten a lot of attention for being one of the rising stars of European MMA, none of the hype means anything when he steps into the gym to go to work. There, he has his share of days when he may wish he was back in Brazil, where he spent nearly four years.

“We all have them days when we don’t want to come to the gym and we don’t want to train and put hard work in,” he admits. “A lot of people don’t see what we go through – cutting weight and training hard and putting our bodies through so much torture mentally and physically. So there are some days where – I don’t want to quit – but I do think it takes a special person to be able to do what all us fighters are doing. So we do definitely deserve a lot of respect.”

"No matter what happens, Sunday will be historic." #UFCLiverpool pic.twitter.com/HCDqPjBC7L
— UFC (@ufc) May 25, 2018

Till has earned that respect. Not just from his fellow fighters and people in the MMA business, but from his city. Remember, Till used to be the wild kid who Heron sent to Brazil to keep him out of trouble and get focused on his life and career. Today, he’s a father, a professional, and a young man about to hear a packed house at Echo Arena chant his name. That’s a life change not lost on him.

“I think they (the people of Liverpool) give me a lot of respect,” Till said. “Not many people can do what I’ve done. Some fighters, they have families and whatever and they’re always second guessing whether they should go or not. For me, when Colin told me to go to Brazil, it wasn’t really a question in my mind. He told me I had to go for the better, so I went. Since then, the people of Liverpool have respected me a lot more because they know what my journey has been like. It hasn’t been an easy journey.”

The great ones never are. And while Sunday isn’t the end of Darren Till’s, he knows this night will be one he’ll never forget.

“I’ve thought about it quite a few times,” he said. “It’s gonna be memorable for me. I love it, and I’m gonna enjoy every minute of that night.”