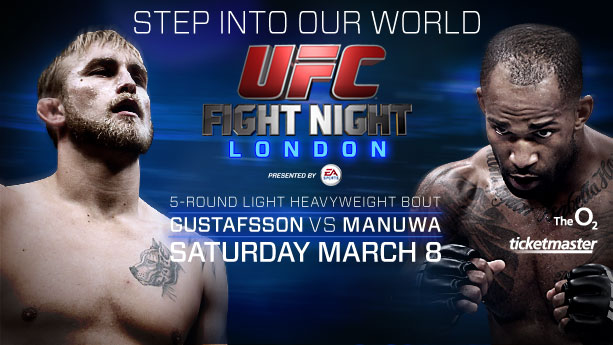 Londoner Jimi “Posterboy” Manuwa will face his biggest test to date as he goes up against Sweden’s Alexander “The Mauler” Gustafsson, who recently came off a narrow loss against world light-heavyweight champion Jon “Bones” Jones. 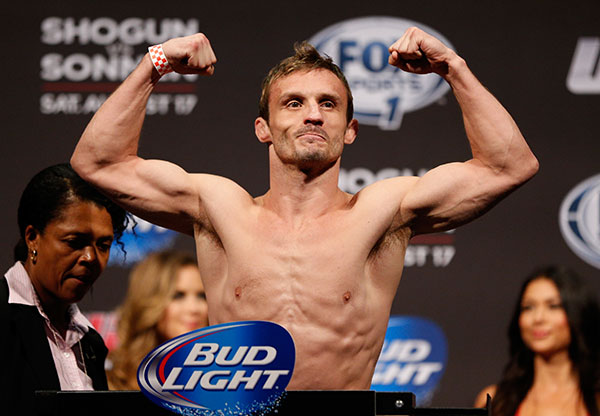 The UFC has also announced that fan favourite Brad “One Punch” Pickett will make his flyweight debut against USA’s Ian “Uncle Creepy” McCall. Pickett, who is also from London, dropped down from the bantamweight division in October.

The undefeated Manuwa has a unique opportunity to prove himself against his weight division’s number one title contender Gustafsson. “I cannot wait to enter the Octagon in London, where I grew up,” Manuwa said, “and to headline an event at The O2 after just three fights in the UFC is incredible. People think I am crazy and need a few more fights but I always say if you want to be the best you have to beat the best.”

“Alex is a huge test for me, but it is one I have long dreamed of. I’m ready to take this opportunity to climb up the light-heavyweight ladder and get closer to my goal of being a UFC champion.  I asked for this fight and thought Alex would avoid me, but he is a true professional and I have great respect for him; he knows my record and he knows how unpredictable every fight can be in the UFC. We’ve seen Silva, Jones and GSP all showing their vulnerability this year.”

His opponent Gustafsson said: “His clean record is impressive but I am one opponent away from challenging the champion again and I will fight my heart out to get a win in March.”

The Swede added that he does not believe that competing in London will be an advantage for Manuwa: “We will put on a hell of a show, but I am not sure who will have the hometown advantage since I expect an invasion of Swedish fans to come and support me.”

Brad Pickett said: “For me this is absolutely massive. I’ve fought in the UFC a couple of times in the UK, and the crowds have always been great, but to actually be competing at home in London is something I’ve always wanted.” 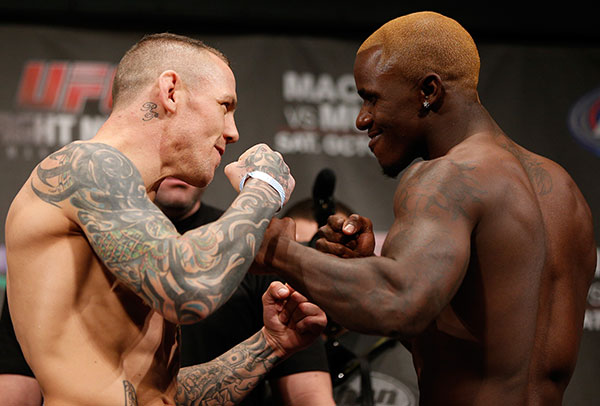 UFC FIGHT NIGHT London will also feature Ross “The Real Deal” Pearson taking on Melvin “The Young Assassin” Guillard, for the second time in six months.  The original bout took place at UFC Manchester in October this year, but was deemed a no-contest due to an unintentional illegal knee from Guillard.  The two will look to settle the score once and for all next March.

Iceland’s Gunnar “Gunni” Nelson is set to face his toughest test to date in Russia’s Omari “Lakec” Akhmedov as the two meet in a welterweight bout. Nelson’s return to the Octagon will be met with eager anticipation after he underwent surgery on his knee earlier this year, leaving him sidelined after two notable performances in the UFC. The two opponents will both be looking to maintain their undefeated record, standing 11-0 and 12-0 respectively.

Sweden’s Ilir “The Sledgehammer” Latifi will make his second Octagon appearance after stepping in as a late replacement for Alex Gustafsson against Gegard Mousasi in Stockholm last April. Latifi will take on French light-heavyweight Cyrille “Snake” Diabate, who last fought in London earlier this year.
Another addition to the card will see England’s Danny “The Cheesecake Assassin” Mitchell make his UFC debut against Brazil’s Igor Araujo. The Doncaster athlete has a challenging test in front of him with Araujo’s record of five consecutive wins.

Fight Club™ members will have an exclusive opportunity to purchase tickets to this event from 29th January via the website www.ufcfightclub.com. To join UFC Fight Club™ go to UFC.com.

Tickets will be available to UFC Newsletter subscribers from 30th January. To sign up to the UFC Newsletter visit UFC.com and enter your email address.

Tickets for UFC FIGHT NIGHT LONDON: Gustafsson vs. Manuwa will be available via www.ticketmaster.co.uk and www.theo2.co.uk.

The full card for UFC FIGHT NIGHT LONDON will be announced over the coming weeks. All bouts are live and subject to change. For more information visit ufc.com