Plus:
GEORGIA’S COLE MILLER TAKES ON SAM SICILIA
TICKETS FOR UFC® FIGHT NIGHT™: ROCKHOLD VS. PHILIPPOU
AT THE ARENA AT GWINNETT CENTER
ON SALE FRIDAY, DECEMBER 6 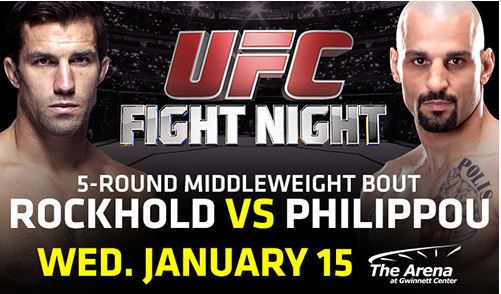 Also on the card, Augusta, Ga. native Cole Miller (20-8, fighting out of Coconut, Creek, Fla.) returns to the Octagon® following his recent win to take on Sam Sicilia (12-3, fighting out of Spokane, Wash.) at featherweight.

The card will also feature exciting striker Lorenz Larkin (14-1, 1 NC, fighting out of Riverside, Calif.) against Brad Tavares (11-2, fighting out of Las Vegas, Nev.), who’s currently riding a four-fight win streak. The remainder of the card can be found at: www.ufc.com/event/ufc-fight-night-atlanta.

“Atlanta’s been home to two huge fight cards in the past and we’re bringing another one to the area on January 15,” UFC President Dana White said. “We’ve got the No. 6 UFC middleweight Luke Rockhold, who was a champion in STRIKEFORCE, taking on the ninth-ranked Costa Philippou, who’s got heavy hands and knockout power. We’re on an incredible hot streak of live events and the fans at Gwinnett Center can expect a great night of fights!”

UFC Fight Club® members will have the opportunity to purchase tickets to this event Wednesday, Dec.  4 at 10 a.m. ET via the website www.ufcfightclub.com. A special Internet ticket pre-sale will be available to UFC newsletter subscribers Thursday, Dec. 5 starting at 10 a.m. ET. To access this presale, users must register for the UFC newsletter through UFC.com.