Tickets for Aldo-Mendes II on Sale This Friday 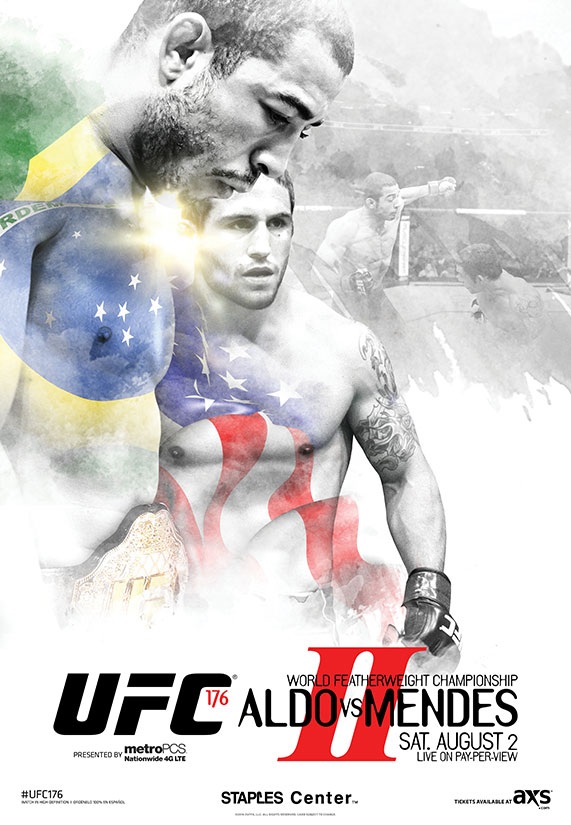 Las Vegas, Nevada – UFC® returns to Los Angeles on Saturday August 2 at STAPLES Center with a world title bout featuring the only 145-pound champion the Octagon® has ever known – Brazilian superstar Jose Aldo – as he defends his title against No. 1 contender Chad Mendes in the most highly anticipated rematch in featherweight history.

The rivalry amongst two of the best camps in mixed martial arts, Nova União and Team Alpha Male, will add another chapter as Mendes (16-1, fighting out of Sacramento, Calif.), riding a five-fight win streak – including three first-round knockouts, looks to avenge the only loss of his career against champion Aldo (24-1, fighting out of Rio de Janeiro, Brazil). Aldo is coming off a dominant five-round victory over Ricardo Lamas at UFC 169, and is seeking to further cement his legacy as one of the pound-for-pound best fighters in the world. The 27-year-old has never lost in WEC or UFC competition, amassing a perfect 14-0 record.

UFC Fight Club® members will have the opportunity to purchase tickets to this event Wednesday, June 11 at 10 a.m. PT via the website www.ufcfightclub.com. A special Internet ticket pre-sale will be available to UFC newsletter subscribers Thursday, June 12 starting at 10 a.m. PT. To access this presale, users must register for the UFC newsletter through UFC.com.

About the Ultimate Fighting Championship®
Owned and operated by Zuffa, LLC, the Ultimate Fighting Championship® (UFC®) is the premier mixed martial arts (MMA) organization and largest pay-per-view event provider in the world. Headquartered in Las Vegas with offices in London, Toronto, Beijing, Singapore and Sao Paulo, UFC produces more than 40 live events annually that consistently sell out some of the most prestigious arenas around the globe. UFC programming is broadcast in over 145 countries to 800+ million TV households worldwide in 28 different languages. The UFC has a multi-year broadcast agreement with FOX in the U.S., which annually includes four live events broadcast on the FOX network, as well as The Ultimate Fighter® reality television show and thousands of hours of programming on FOX Sports 1 and FOX Sports 2. In 2014, UFC launched UFC FIGHT PASS™, a digital subscription service with exclusive live events, thousands of fights on-demand and original content. The UFC organization also licenses over 100 UFC GYM® locations, and owns UFC.TV® (offering live event broadcasts and video on-demand around the world), UFC FIT™ (an in-home fitness and nutrition program), UFC Magazine, and has a videogame franchise with EA SPORTS, UFC Fight Club®, UFC Fan Expo®, Octagon™ branded apparel, best-selling DVDs and Blu-rays and Topps Trading Cards. For more information, visit www.UFC.com and follow UFC at www.Facebook.com/UFC and on Twitter and Instagram: @UFC.