Tibau Ready to surprise the skeptics

"Expecting a surprise is what motivates people to watch a fight like this. So the unexpected can happen, and I'm here to prove it." - Gleison Tibau 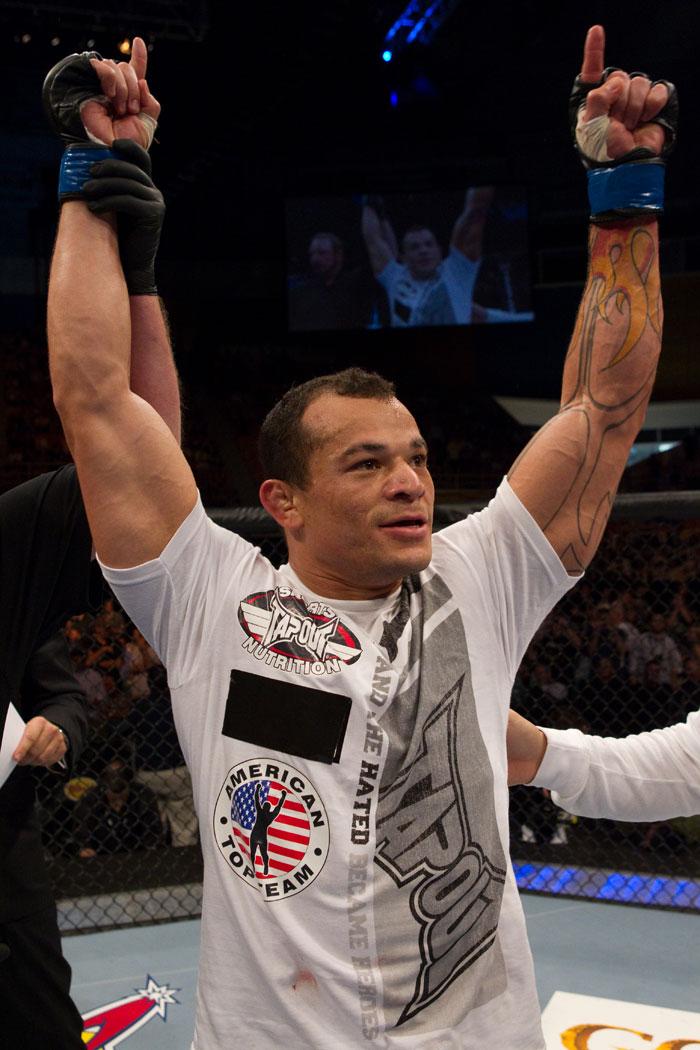 Every time Gleison Tibau is called to fight in UFC, the issue of cutting weight takes center stage. The former middleweight and welterweight turned to the lightweight class in 2007, bringing with him the positive and negative sides of the monstrous discipline and diet needed to step on the scale at the 155 pounds that the division demands.

For his next fight, a short-notice bout against fellow Brazilian Rafaello 'Tractor' Oliveira, who is on a four fight winning streak, Tibau had to dig extremely deep to get his weight to 155 with only 24 days of preparation. Even if a match is scheduled within 90 days, we’ve heard about the trials Tibau does through; so with less than 25 days’ notice - the diet is a drama. But no guts, no glory, so Tibau moves forward.

"It really isn't easy to reach that final goal, so to get to the correct weight and to be in excellent physical condition, it's necessary to have a day-by-day routine with focused training sessions while you pay attention to what you can and you can't eat," he said.

For someone who wants to fight 3 to 4 times per year, the opportunity is perfect. Tibau's last appearance was at UFC 128 on March 19th against Kurt Pellegrino. Tibau beat the New Jersey native by split decision, and, with five defeats and eight wins on his UFC record, accepting this weekend’s bout gives him a chance to move to 2-0 in 2011 and also inch closer to a title shot. It is a risky move though.

"All choices involve dangers, and my challenge isn't only to win, but to also overwhelm the obstacles in my way," he said. "My wish is to get to the top. It's a place that only a few get to, so I can't sit down and wait. I need to make it happen, and to go after it.”

“I'm grateful to the UFC for the fight, and to trust in my name,” he continues. “I didn't think one second about refusing. It doesn't matter if it's Bart Palaszewski (his original foe) or Oliveira; I'm focused and trained to perform well in this fight. My strength and physical coach Stefane Dias is, without a doubt, one of the people responsible for my success, plus all of my American Top Team family have been important in giving me support."

Before the fight against Pellegrino, Tibau’s biggest worry had been trying to figure out the judges’ scoring criteria, and he kept saying that he didn't want to leave the decision in the judges’ hands, a fact explained by the scorecards of his fights with Melvin Guillard and Tyson Griffin, both of which he thought he won.

“I was distrustful about what would happen, due to my past experiences," he says. "But at the end of the fight, my superiority was clear. Kurt did well in round two, but he wasn't fighting at the same pace until the end."

Now approaching his bout with Oliveira, Tibau had more things to worry than the fight going to the distance. Cutting almost 40 pounds and facing a change of opponent seven days prior to Saturday night, he credits much of his ability to stay calm and focused to the routine of training at ATT and the lessons learned in the last fight.

"Right after the Pellegrino fight, I was already training strongly and waiting for the call," he said. "I kept the perseverance from my last fight to this next one. Like I said, Kurt came on strong in the second round with hard strikes, and his fans screamed like I was done. But I didn't fear it; I believed in myself and at the end I was better."

When the announcements of Palaszewski and later Oliveira popped up as opponents of Tibau, many started to say this would be one more fight where the lightweight powerhouse would try to dictate the rhythm with his ground game due to his lack of preparation time and the amount of pounds that Tibau puts on after the weigh-ins. But for Tibau, he believes this is the time to surprise those who doubt his ability to knock out or sub Oliveira.

"I need to take advantage of the doubts of those who had a wrong impression of me," he said. "This is a kind of motivation for me, and expecting a surprise is what motivates people to watch a fight like this. So the unexpected can happen, and I'm here to prove it."