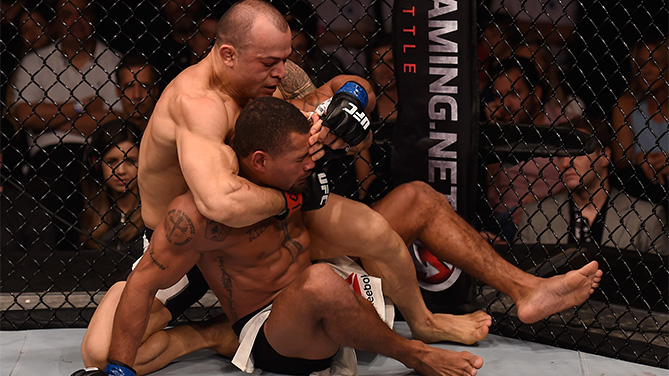 The latest round of the American Top Team vs. The Blackzilians rivalry went to ATT Saturday night at Ginásio do Ibirapuera in Sao Paulo, Brazil, as the man with the most wins in UFC lightweight history, Gleison Tibau, submitted Abel Trujillo in the first round.

Tibau needed less than 20 seconds to take Trujillo down, and while “Killa” got right back up, Tibau kept him tied up until he was able to force another trip to the mat. The two scrambled for the next few moments until Tibau took his opponent’s back, and as the Brazilian worked on a rear naked choke, referee Keith Peterson stopped the fight at 1:45 of the opening round. Trujillo didn’t tap, immediately jumping up to protest the decision, but the call stood. 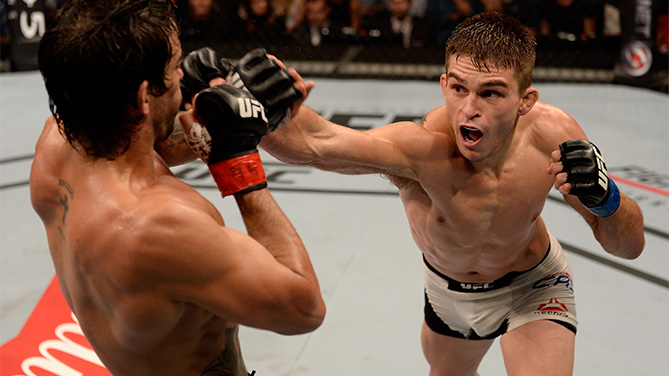 Cabral had a solid first round on the mat, but his attempt to lock up a kimura may have done more harm than good, as Case’s smart defense of grabbing his own shorts not only kept the Brazilian from getting the submission, but the effort put out by Cabral left him looking winded by the end of the frame.

Case was able to keep it standing early in round two, and he scored a knockdown two minutes in. Cabral recovered quickly and wanted to stay on the mat, but Case wisely let him up and resumed a punishing stand-up attack that was wearing the Brazilian down.

Cabral got the bout back to the mat in the first minute of the final round and went to work for the submission. Case scrambled to his feet, Cabral remaining locked on as he pulled the Iowan back down and worked for a rear naked choke. With a little over a minute left, Case was able to turn and get out of trouble, but he remained on the mat, albeit in the top position, and as the two rose, Case fired away with strikes that cut his foe just before the final horn. 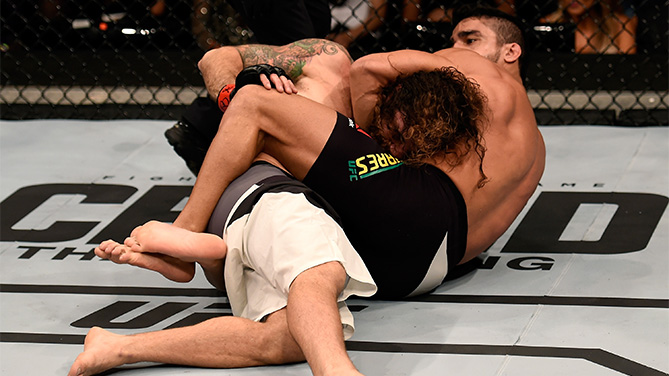 Guida’s first takedown attempt ended in disaster, as Tavares locked in a tight guillotine choke. Guida remained calm and tried to ride out the attempt, but Tavares wasn’t letting go, forcing “The Carpenter” to tap out. It was the fastest submission in UFC featherweight history. 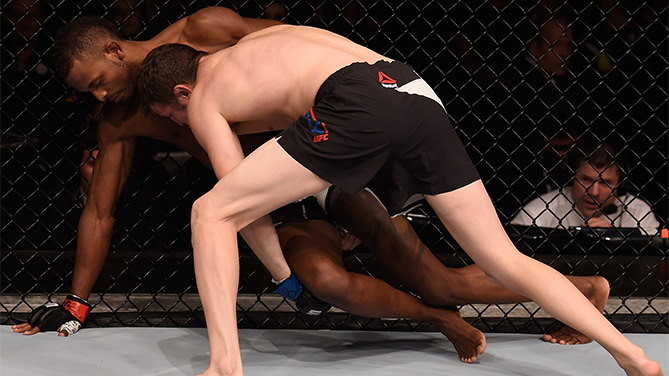 In a clash of featherweight prospects, Chas Skelly and Kevin Souza went back and forth for nearly two rounds before Skelly pulled off a second-round submission victory.

Skelly worked hard to get Souza to the canvas in the first round, and with a little over three minutes left, he got that takedown, and then it was time for the Texan to implement his game plan. Skelly nearly locked up a D’arce choke, but the bloodied Souza escaped, and with a little over a minute remaining, he landed a left hook that dropped “The Scrapper.” Skelly cleared his head and got upright, yet Souza kept pressing with his wild striking attack until the horn sounded.

A Skelly takedown to start round two ended up with Souza on top, and the Brazilian fired off several hard shots before the two stood up. But just when it looked like momentum was on Souza’s side, Skelly scored with a more favorable takedown and then sunk in the rear naked choke that forced Souza to tap out at 1:56 of the second stanza.

With the win, Arlington’s Skelly improves to 15-1; Florianopolis’ Souza falls to 19-4.