What happened to the cast of The Ultimate Fighter: Team Rampage vs. Team Forrest? 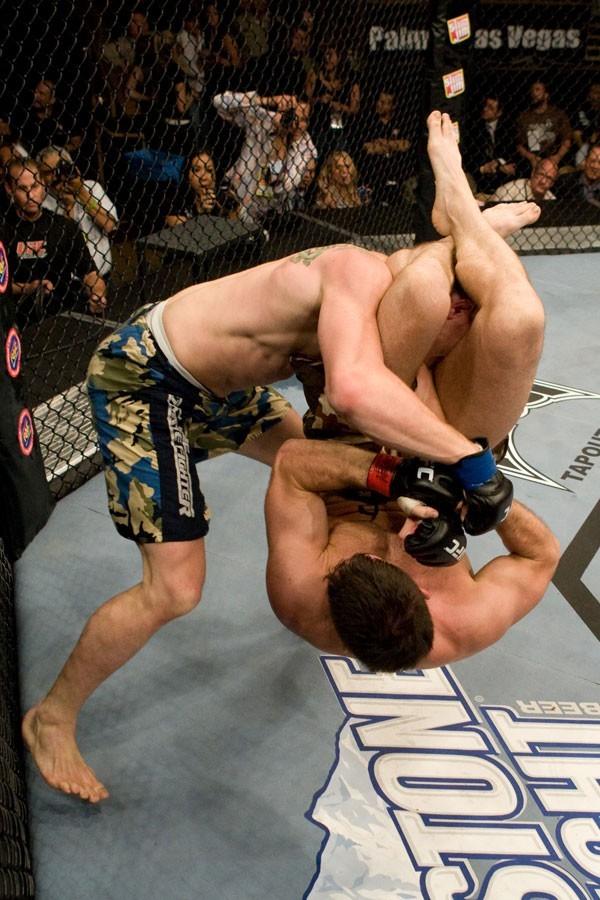 One of the most interesting seasons in the history of The Ultimate Fighter, TUF 7 focused on the contrast in personalities between coaches Quinton “Rampage” Jackson and Forrest Griffin, but beyond that, an unheralded underdog named Amir Sadollah shocked the MMA world by racing through the competition and winning the series.

Today, only six of the 17 fighters who made it to the house remain in the Octagon. Who are they, and what’s the assessment of Sadollah and his fellow competitors three years later? Read on for their UFC progress reports.

In season seven of TUF, there was a change to the usual method of having 16 fighters chosen for the house and the competition, and it made the stakes even higher, as this time, 32 fighters flew into Las Vegas for the show. Those 32 were then paired off for preliminary round fights, and the 16 left would then compete for the TUF title.

*CB Dollaway
UFC Record – 5-4
An early favorite on TUF7, Arizona State University wrestling standout CB Dollaway was the first overall pick on the show, and he lived up to expectations, romping over David Baggett, Nick Klein, and Cale Yarbrough. He was upset in the semis by Amir Sadollah, but when Jesse Taylor was ousted from the show, Dollaway defeated Tim Credeur to earn another crack at the man who beat him, this time in the finals. The result was the same though, and it was off to the UFC for Dollaway, who has had an up and down run thus far. And while wins over Taylor, Goran Reljic and Joe Doerksen were evened out by losses to Tom Lawlor, Mark Munoz, and Jared Hamman, Dollaway always comes to fight, which should guarantee that he’ll be sticking around for a while.

*Matthew Riddle
UFC Record – 5-2
When you want to talk about learning on the job, look no further than Matt Riddle, who has fought each of his seven professional fights in the UFC Octagon. That’s impressive enough; to have won five of those bouts is even more so. 1-1 on TUF, Riddle has become a solid prospect in the 170-pound weight class, with notable wins over DaMarques Johnson and Steve Bruno. A UFC 124 loss to Sean Pierson should have earned Fight of the Night honors, and on September 17th, he returns to action to face highly-touted newcomer Lance Benoist.

Patrick Schultz
UFC Record – Never fought in the UFC
Scrappy New Englander Pat Schultz was submitted by Luke Zachrich in the preliminary round, but was brought back to replace Paul Bradley, who was removed from the show due to a contagious skin condition. Schultz next fight was a controversial decision loss to Cale Yarbrough, and he never fought in the Octagon. After a nearly two year break, Schultz returned to active duty in 2010, going 1-1 in two post-TUF bouts.

Dan Cramer
UFC Record – 1-1
Another novice pro when he fought his way onto the TUF7 cast with a win over Jeremiah Riggs, Dan Cramer knocked out Luke Zachrich on the show before getting submitted in the quarterfinals by Tim Credeur. Cramer went on to fight twice in the UFC, defeating Matt Arroyo and losing to Riddle, both via decision. He has since gone 6-2 outside the organization, and at 25, still has plenty of upside.

Gerald Harris
UFC Record – 3-1
Raw talent Gerald “Hurricane” Harris found out that he wasn’t ready for prime time yet on TUF 7, going 1-1 on the show and then being forced back to the local scene for the next two years. While there, Harris evolved his game and won six in a row, earning himself an invite to the UFC. Harris then made plenty of waves in the Octagon by winning his first three fights, with two earning Knockout of the Night honors. But after a dismal three round decision loss to Maiquel Falcao at UFC 123 last November, he was cut from the organization. He’s gone 1-1 in two post UFC bouts, most recently decisioning Anthony Ruiz in May.

Mike Dolce
UFC Record – Never fought in the UFC
With a 5-10 pro MMA record (2-6 since TUF7) and a single win (over Prince McLean) on the show, you would assume that Mike Dolce found other means of employment since his stint on the reality series. But that would be an incorrect assumption, as Dolce has found his niche as a nutritionist to the stars in the UFC, with his work with the likes of Quinton Jackson, Thiago Alves, Mike Pyle, and Vitor Belfort earning positive notices throughout the MMA world.

Jeremy May
UFC Record – Never fought in the UFC
Florida’s Jeremy May is best known for being the guy who put lime juice in Matt Brown’s tobacco, setting off one of the most memorable sequences of the season on TUF 7. The polarizing May then made Brown’s personal highlight reel when he was KOed by “The Immortal.” After the show, May’s resume has included the names Murilo Rua, Frank Lester, and David Branch, but his record currently sits at just 9-8.

Brandon Sene
UFC Record – Never fought in the UFC
Brandon Sene earned a spot on the show with a submission of Aaron Meisner, but was eliminated in episode five by Dante Rivera. He has only fought twice in the post-TUF years, losing both bouts, which were spaced three years apart.

*Paul Bradley
UFC Record – 0-1
A two-time All-American wrestler at Iowa, Paul Bradley fought his way into the TUF7 house and was expected to make some noise in the tournament, but in episode three, a skin condition forced his removal from the show. Bradley went on to post a 12-2, 1 NC record, and earlier this year he was brought in on short notice to face Rafael Natal at UFC 133. He lost the bout via decision, but it will be interesting to see what he can do with a full camp behind him.

*Tim Credeur
UFC Record – 3-2
Louisiana veteran Tim Credeur made the most of his opportunity in the TUF spotlight, defeating Erik Charles, Matt Riddle, and Dan Cramer before losing a decision to Jesse Taylor in the semis. Taylor’s ouster from the show gave “Crazy Tim” a reprieve, but he would lose to CB Dollaway in his second semi chance. After the show, Credeur defeated prospects Cale Yarbrough, Nate Loughran, and Nick Catone, then engaged in a memorable war with Nate Quarry. After a long layoff, Credeur returned in June, but was knocked out by Ed Herman. He will be back in action this October.

*Amir Sadollah
UFC Record – 5-3
Unassuming and unknown, Amir Sadollah was an unlikely force during season seven of TUF, but with each successive fight (wins over Steve Byrnes, Gerald Harris, Matt Brown, and CB Dollaway – all past or future UFC competitors), he made believers out of everyone. After winning his rematch with Dollaway in the TUF7 final, the popular Sadollah began his Octagon journey, defeating Phil Baroni, Brad Blackburn, Peter Sobotta, and DaMarques Johnson. Losses against Johny Hendricks, Dong Hyun Kim, and Duane Ludwig have kept him from taking that next step up, but this work in progress will always be a tough out for anyone he faces.

Jesse Taylor
UFC Record – 0-1
Hard-nosed wrestler Jesse Taylor earned a spot in TUF lore that he probably doesn’t want, as he was the first fighter to earn a spot in the finals but lose it due to an out of the Octagon incident. UFC President Dana White would give Taylor a shot at redemption in July of 2008, but “JT Money” was submitted by a CB Dollaway Peruvian Necktie in the first round. 13-3 since his last Octagon bout, Taylor has scored wins over Murilo Bustamante, Jason Day, Chris Camozzi, and Denis Kang.

*Matt Brown
UFC Record – 5-4
With a record barely over .500, no one expected Ohio’s Matt Brown to do much of anything on TUF7, let alone stay in the UFC for the last three years, but you can’t underestimate the power of hard work, determination, and being an ornery, stubborn fighter. 2-1 on TUF, Brown has won five of nine UFC bouts, most recently snapping a three fight losing streak with a three round unanimous decision win over John Howard.

Cale Yarbrough
UFC Record – 0-1
Another one of the ‘on the job’ trainees populating the TUF7 cast, Yarbrough won his first two bouts on the show before a TKO loss to CB Dollaway on the show and a similar defeat to Tim Credeur in a UFC bout in July of 2008. The 24 year old has built an 8-2 record on the local circuit, including a 2010 Strikeforce win over UFC vet Josh Schockman.

Dante Rivera
UFC Record – 0-1
New Jersey standout Dante Rivera won two fights on TUF 7, defeating John Wood and Brandon Sene, but his run to the season title was ended via decision by Jesse Taylor. A bout on the season finale card against rival Matt Riddle ended in a decision defeat, marking the end of the Frankie Edgar and Ricardo Almeida training partner’s UFC stint. Rivera has compiled a 4-2 record in his post-TUF career, fighting exclusively in his home state.

Nick Klein
UFC Record – Never fought in the UFC
3-0 when he entered the TUF house with a submission of David Mewborn, armbar specialist Nick Klein was submitted himself by eventual finalist CB Dollaway and never fought professionally again.

Luke Zachrich
UFC Record – Never fought in the UFC
Luke Zachrich learned his craft under the tutelage of Dan Severn and Jorge Gurgel, among others, but after a TKO loss to Dan Cramer in his second TUF7 bout, he wasn’t seen in the Octagon again. Since the show he’s fought sporadically, going 3-1.