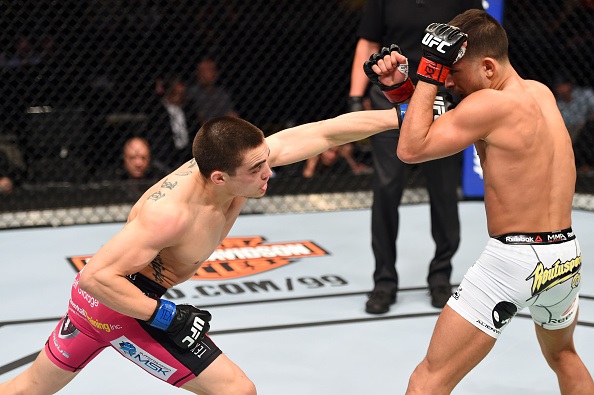 In the capper of a UFC 185 early prelim session that featured all finishes, Ryan Benoit returned from a nearly 16-month layoff Saturday night with an upset second-round knockout of Sergio Pettis at American Airlines Center in Dallas, Texas that spoiled Pettis’ UFC flyweight debut.

There were more than a few heated exchanges to kick off the bout, but it was Pettis always coming out on top, prompting Benoit to seek – and get – a takedown midway through the round. Pettis reversed the position though, eventually getting back to his feet, where he continued to sharpshoot from distance and then pick up a takedown of his own in the final minute.

It looked like more of the same in round two, but the gutsy Benoit (8-3) kept battling, and as the two traded left hooks, the Dallas product’s landed perfectly, dropping Pettis (12-2) to the mat. Benoit unloaded on the Milwaukee native, with referee Kerry Hatley stopping the bout at the 1:34 mark. It was an emotional victory for Benoit, who took a shot at Pettis after the end of the fight, immediately apologizing for his actions.
“I’m a finisher, I have been all of my career," Benoit said. "It felt really good to get back in the Octagon after such a long layoff and get what is easily the biggest win of my career. I also want to apologize to Sergio, his camp and all of the fans. My adrenaline got the best of me and nothing like that will ever happen again.” 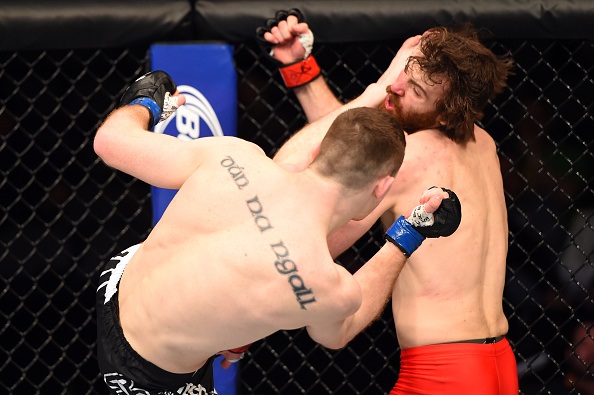 The UFC’s Irish contingent has a new and explosive addition, as Joseph Duffy debuted with a bang, knocking out Jake Lindsey in the first round.

Duffy’s pro boxing pedigree was evident in the early going, with Lindsey attempting to respond with hard kicks to the leg. But it was a kick to the head from the Donegal native that marked the beginning of the end for Lindsey. Two punches to the body finished the job, with referee Herb Dean ending matters at the 1:47 mark. 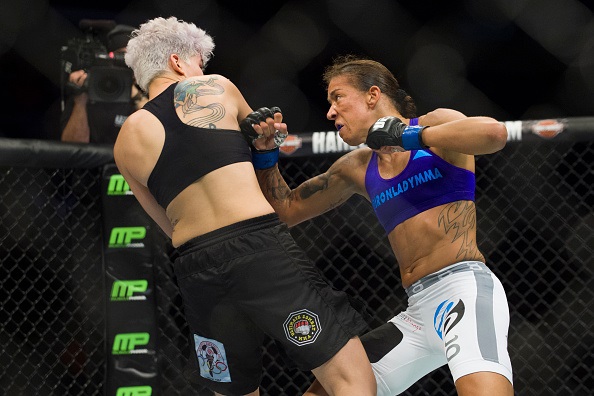 Germaine De Randamie finally showed off her vaunted striking game in the Octagon in the bantamweight opener, dominating, then stopping, Brazil’s Larissa Pacheco in the second round.

De Randamie put in the best round of her UFC career in the first, drilling Pacheco over and over with hard right hands, stiff jabs, and big uppercuts. With 1:30 left, Pacheco tried to lock up with the Netherlands native, but De Randamie easily broke loose and went back to work.

In the second, it was more of the same, and finally, after hurting Pacheco with more right hands, referee Don Turnage stepped in and halted the bout at the 2:02 mark.