If there was any question whether UFC fans would accept new UFC women’s bantamweight champion Holly Holm after she dethroned the ultra-popular Ronda Rousey in November, that answer was delivered at Friday’s fan Q&A in the MGM Grand Garden Arena before the UFC 194 weigh-in.

And yes, everybody loves Holly, especially the Irish fan base that showed up to cheer for their man Conor McGregor before his Saturday bout against Jose Aldo. Whether they were serenading “The Preacher’s Daughter,” asking her to add them on Tinder, or just congratulating her for her upset win at UFC 193, it was clear that the 34-year-old was not getting any backlash for beating “Rowdy” Ronda.

What was less clear is what’s next for Holm. Rousey is expected to get an immediate rematch, but with that fight rumored for July of next year, the name of Miesha Tate has been floated around in the meantime.

“I would be honored to fight her,” she said. “The UFC doesn't have anything but the 135 and 115-pound divisions, and that's where we're at, and I'm fighting with that organization, so whatever they say. I'm not saying it's out of the question or not an option, but like I said, I'm just here to take on whoever, so I'd love to.”

Bottom line? Bring on anyone willing to fight her.

“I've never picked a fight in my life, I never said this is the opponent I want. Even before the Ronda fight, everybody thought it was too soon for me. But it wasn't one that I picked,” Holm said. “Whatever opportunity is in front of me, I'm going to make the most of it. And that's why I'm standing here today. So whatever they bring to me. I'd like to fight sooner rather than later. I want something soon, but we'll see what happens.” 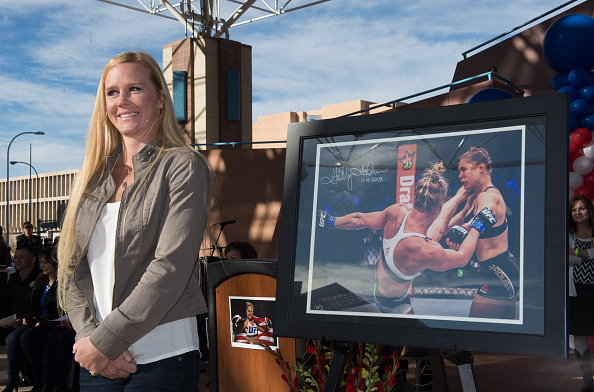 Until that next fight is scheduled, it’s more media, more appearances, and more basking in the glow of the former three-division world boxing champion’s biggest victory, one so big it earned her a parade in her hometown of Albuquerque on Dec. 6.

She was right. More than 22,000 people showed up to celebrate their champion.

“To have that much love and support is just awesome, and I can't even put it into words,” Holm said. “I'm forever grateful.”

That humility has won Holm even more fans, and if you needed any more reason to cheer for her, just look at her response when she was asked to describe the reaction in the Jackson-Wink MMA gym when she brought the championship belt back.

“I actually forgot to bring the belt to the gym when I went back to see my teammates,” she said, laughing. “The actual win is what's so exciting to me, not what I'm wearing around my waist. I just wanted to run in and hug everybody. It was my time to go back and praise them.”

And now it’s time to praise Holm, who most certainly deserves her place in the sun.

“Being the champ is a constant reminder that I got the victory, and it's amazing,” she said. “It's the best feeling in the world. There's a little pressure, but it drives me.”