Thomson Happy to Play the Spoiler on Wednesday 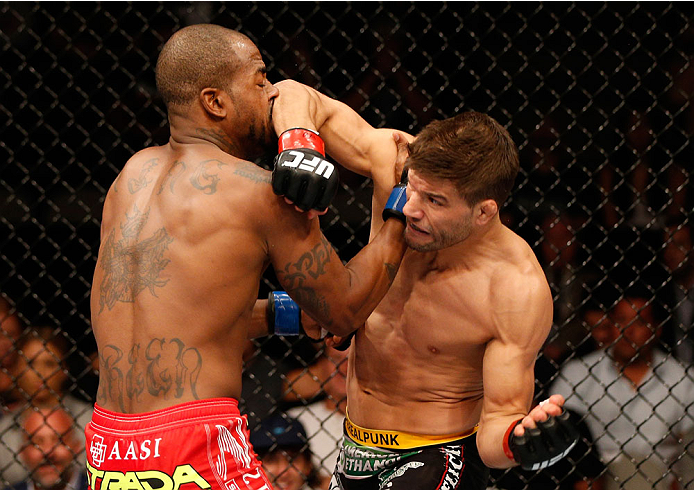 When Josh Thomson’s UFC Fight Night San Diego opponent Tony Ferguson tweeted that he should get off Twitter and get back to training, Thomson looked at it as yet another puzzling development in the sport he helped build.

A fifteen-year veteran, Thomson has been one of the world’s best lightweights since 2000, in multiple promotions. He’s fought the best fighters, has traveled the world, and now he’s even starring in movies.

But the war of words on Twitter that has permeated the fight game?

“I’ve outgrown that,” said Thomson, whose nickname “The Punk” belies the now 36-year old curmudgeon, who these days sounds more like the late Andy Rooney of CBS’s “60 Minutes,” then the modern day UFC fighter.

“I’ve been fighting long enough to know better than to respond to something like that. All of the top guys never really did all of that. BJ Penn did it a little bit but it doesn’t make you fight any harder. It doesn’t make your name bigger. Chuck Liddell never had to amp himself up to fight. A lot of it now is because of social media, and these guys feel like they have to do it. The truth is, most of them just sound like idiots. Not a lot of guys can sound like Conor McGregor or Chael Sonnen.”

Thomson feels like the trash talk inevitably becomes personal, and when fighters go into a match with bad blood, it usually means a boring fight for the fans.

“When that happens, neither guy is willing to engage because they don’t want to make a mistake,” he said. “The Rashad Evans versus Jon Jones fight is a perfect example. I shut that off after the second round because you knew what you were going to get for the rest of that fight.”

If Thomson sounds a bit jaded these days, he’s got good reason.

“The Punk” has had a string of bad luck since returning to the UFC. He’s lost two razor thin split decisions against former lightweight champion Benson Henderson and Bobby Green. Thomson feels like he won both of those bouts.

“The 155-pound division is the toughest division in the world, so to go out and get a finish every fight is impossible,” he said. “But to leave it in the judges’ hands is suicide. I’ve been on the wrong end of what I think are bad decisions twice now and it really sucks. What happens is you’re fighting the toughest competition non-stop, and to leave your hopes and dreams in three persons’ hands takes things out of your own hands. These days with these judges I really can’t tell you what they’re looking for.”

Conversely, Ferguson is on a hot streak, so to say Thomson will have his hands full in this fight is a bit of an understatement. “El Cucuy” is on a five-fight win streak and has only one loss in six years. Thomson isn’t fazed.

“Been there, done that,” he said. “How many times have I fought the best guys? I’ve played spoiler to dozens of Fergusons before he was even fighting.”

Indeed, Thomson has fought a who’s who of lightweights throughout his career, and has only lost seven out of 27 fights. He’s 1-2 against former Strikeforce champion Gilbert Melendez, one of the more spirited rivals in the now defunct promotion.

Wednesday’s bout is Thomson’s last fight on his UFC contract, and although he is not ready to be done with fighting, he’s got a budding movie career in the making and he’s expressed interest in being a UFC commentator or Fox Sports analyst after he hangs up his gloves, like Kenny Florian and Brian Stann.

“I just had a premiere for a movie I shot in China a few months ago, and I just signed on to do one here in California, which I will start shooting right after this fight,” he said. “If I retired tomorrow I would be very happy with my career. We haven’t talked too much about my next fight contract. We’ll see what happens after this fight.”

A bit of a rebel in his older age, Thomson is sporting a rather ragged beard, perhaps rebelling against his own good looks and the establishment.

“No,” he said. “I’m just too lazy to shave. If you’re training three times a day, your downtime is for resting so you can get back to training. The last thing I want to do is shave right now.”