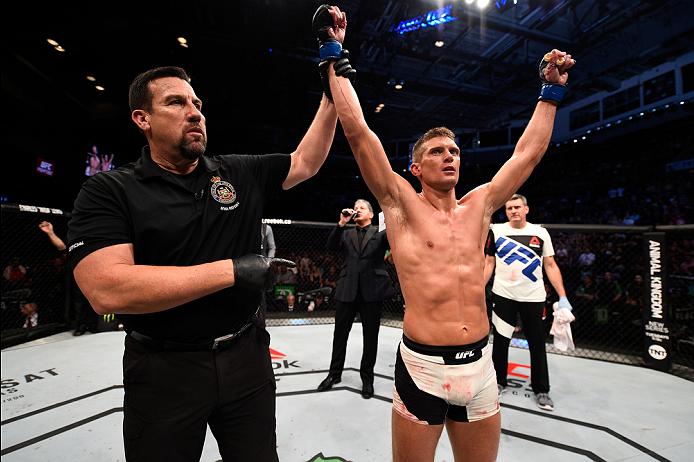 With seven consecutive wins, including a dominant five-round unanimous decision victory over No. 1-ranked welterweight contender Rory MacDonald Saturday at TD Place Arena in Ottawa, Stephen “Wonderboy” Thompson made it clear that he should be next in line for a crack at the 170-pound crown.

“Title belt, baby,” Thompson said when asked about his future plans. “I want the winner of Robbie Lawler and Tyron Woodley.”

Lawler and Woodley meet in July, and no one will be more interested in the result than Thompson, who improved to 13-1 via scores of 50-45 twice and 48-47.

“I expected to come out here and for it to be more of a war,” he said. “I didn’t think Rory was going to be prepared for the angles, the speed. But as soon as I met him in the middle, just his stance, I realized this was going to be a chess match.”

MacDonald, who was fighting for the first time since a title fight loss to Robbie Lawler last July, falls to 18-4, and was gracious and classy in defeat.

“It was a hard fight, but it was good,” he said. “I came in the best shape of my life and I was at my best tonight, so I can’t take anything away from Stephen. He stopped all my takedowns really successfully and he’s a tricky guy. I wish him all the best.”

The top two welterweight contenders carefully circled each other in the early going, MacDonald breaking things open in the second minute with a rolling heel hook attempt. Thompson got loose and it was back to the standup chess match, MacDonald again rolling in for the sub attempt but coming up short. In between, Thompson was able to get off some kicks, but nothing of note. With a minute left, the two engaged and locked up, both getting off some punches before a brief clinch against the fence.

The second round was similar to the opening stanza, and the crowd began getting restless. MacDonald did try to shake things up with a takedown attempt, but Thompson shook it off and continued to control the pace and location of the fight.

MacDonald landed a hard right hand early in round three, and it apparently gave him the confidence to take more risks on the way in. The bout soon strayed to the mat, but Thompson got out of trouble and back to his feet with little problem. Once standing, Thompson again controlled the real estate where the fight was taking place, and MacDonald was having issues figuring him out.

In the fourth round for the first time in his UFC career, Thompson got busier in round four, firing punches and kicks both at long range and up close. This more aggressive stance opened him up for shots from his opponent, and MacDonald did get in some shots during the exchanges, but not enough to deter Thompson’s rhythm.

MacDonald came out fast for the final round, yet when he landed hard shots, Thompson would tag him right back. The crowd was back into the fight though, chanting “Rory, Rory,” and the bloodied Montrealer tried to turn the fight around. A takedown attempt in the third minute went awry, with Thompson winding up on top. “Wonderboy” landed some ground strikes before the two stood, and a subsequent kick briefly wobbled MacDonald. The gutsy “Red King” didn’t back down though, and he kept trying to pull off a miracle finish, but it was not to be.