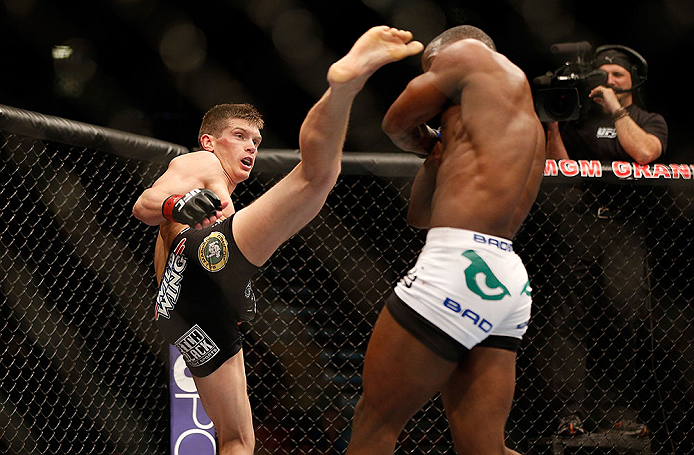 Buzz is something every fighter hopes to obtain. When fans start talking, their eyes are sure to follow when the time comes for a fighter to step inside the Octagon and go to work. This scenario can help elevate an athlete’s profile in quick fashion, and the process can be expedited if the combatant in question lives up to the hype. Should this be the case, a fighter can transverse the ultra-competitive landscape of the sport’s biggest stage by traveling in the express lane very few ever get to experience.

That said, this scenario comes with certain pitfalls built in. Where the momentum from an established buzz can lift a fighter to new heights, it can deflate in an instant if said fighter stumbles. In most cases, a setback of any variety is enough to take the polish off a rising talent in MMA, but Stephen Thompson is looking to prove he’s the exception.

The South Carolina-born fighter parlayed an extensive background in karate into a flawless resume on the kickboxing circuit. He built noise throughout his time on the tournament circuit as he strung together a consecutive run of championships. In 2010, “Wonderboy” made the jump over to MMA, and rolled off five consecutive victories on the regional circuits of the southern part of the East Coast. The level of success earned Thompson an invite from the UFC - one he had been biding his time to get.

The former kickboxing champion made his official promotional debut against Dan Stittgen at UFC 143 in February of 2012, and wowed the UFC fan base by scoring a blistering first round knockout on the preliminary portion of the card. Thompson’s arrival was one of the most memorable initial showcases in recent memory, and set the buzz surrounding him to another level.

Nevertheless, the noise around him would fall silent in his next outing as he was outwrestled and outmuscled by veteran Matt Brown. “The Immortal” put in the work necessary to earn the unanimous decision victory, and the 31-year-old was in jeopardy of becoming MMA’s version of a “one hit wonder.”

“A few years ago I went from kickboxing to MMA and there was a lot of hype around me, especially coming to the UFC because of my striking record,” Thompson said. “I was 57-0 -and having never lost, there was a lot of hype and pressure. That increased after the Brown fight. Everyone saw him take me down and outwrestle me. But that didn’t really bother me any. I used it as fuel to train harder to show the critics that I do have wrestling and I do have jiu-jitsu. That fight with Matt Brown is always in the back of my head. Not so much in terms of fighting him, but what happened and the hype around it.

“I think losing was a blessing to be honest with you because there is a lot of weight off my shoulders. Now, I’ve lost before and it was no big deal - Woopty Doo - and now I can go out there and do my thing. That’s how I look at things. I don’t have to worry about that pressure anymore and I can go out and do what I need to do.”

With the stakes high and determined to carve out his place on the UFC’s welterweight roster, Thompson used the setback to motivate him forward, and the results were impressive as he picked up victories in his next two outings. He defeated Strikeforce veteran Nah-Shon Burrell at UFC 160 in May of 2012, then drubbed Canadian Chris Clements in the second round of their tilt just four months later at UFC 165.

“I think I executed the game plan we had for the fight fairly well,” Thompson recalled. “I knew he was a striker who had long arms. I wanted to keep him at a distance and on the end of my punches. I wanted to use some wrestling and take him down in the fight. I wanted to take him down and control him on the ground in the first round, then keep things standing in the second. That’s what I did and that’s where I finished him. I was very happy with my performance that night.”

Thompson’s victory over Clements made him successful in three of his four showings under the UFC banner, and showed the type of gained improvements to certify him as more than just a one-dimensional fighter. The Simpsonville resident has invested a tremendous amount of time and effort into his ground game in his quest to round out his skill set and become a complete mixed martial artist.

While Thompson believes all the necessary elements are there, a lifetime spent in martial arts has taught him there are always improvements to be made. Thompson was well aware of the skills he needed to require long before he decided to make the jump to MMA and he’s been working diligently for the past several years to bring those additional elements of his game up to snuff.

Where developing wrestling and jiu-jitsu techniques are undoubtedly difficult tasks, Thompson was also facing a very unique stylistic challenge. The kickboxing stance he uses when fighting at range is a side-turned style, and that body position makes the traditional wrestling shoot an extremely difficult move to pull off.

Nevertheless, he’s a technician through and through and developed a way to blend the disciplines to suit his attack.

“One of the things I’ve really had to work on is making the transition from my striking to my wrestling because it was very obvious at first,” Thompson said. “But I’ve put in a lot of work operating from the side stance I use to make sure my opponent doesn’t know what I’m going to do. If I were to switch from a karate stance to a more straightforward wrestling stance, they would know that something was coming. I had to learn how to shoot from my side stance, and while it was a little awkward at first, I made it work.

“Also, spacing and footwork were probably two of the biggest things I had to adjust for MMA. I’ve had to adjust to these wrestlers - especially competing in the welterweight division, where there are a lot of awesome wrestlers. When I fought in just kickboxing, I could stand up a little bit taller and could bounce around. The movement and my stance were a little bit different. When I started training with Georges St-Pierre and those guys before I moved to MMA, I found out that I’m going to have to modify my stance and movement to the wrestlers. If I’m not careful in there and go back to my kickboxing ways, I’m going to get taken down in there. My stance is definitely one of the things I had to modify.”

He will be looking to keep the progress rolling when he squares off with Robert Whittaker this Saturday night at UFC 170. The Ultimate Fighter: The Smashes alum has proven to be a game fighter when it comes to scrapping things out on the feet, and Thompson is looking forward to mixing it up with him in Las Vegas.

“I think it’s going to be a great and exciting fight. I really like to fight good martial artists, but good people too. He’s definitely a cool guy. I was able to hang and talk with him a little bit because we fought on the same card at UFC 160. He’s a good dude and he comes from a karate background as well. Granted, it’s a little bit different of a style but he’s also training at Tristar, which is a big wrestling gym as well. They have Georges St-Pierre and Francis Carmont, two fighters who people always talk about their wrestling, so that is a big thing at that gym. That is one thing I have to look for in this fight. I have to prepare for his striking, but his takedowns as well. Wherever this fight goes I’m going to be ready for it.

“People want to see someone get knocked out and this is a fight where something like that could very well happen. It’s going to be very exciting.”