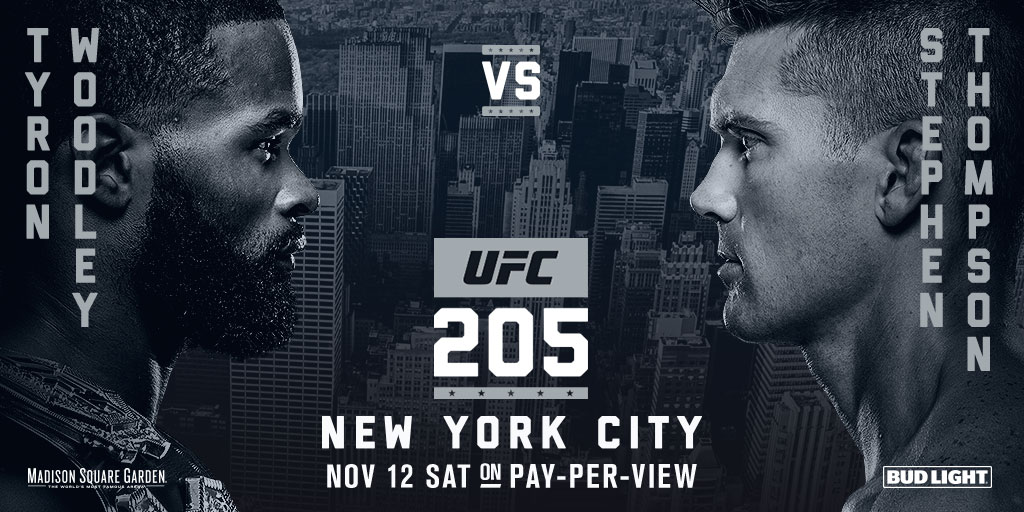 Based on the reception he received during the UFC 205 press conference at the Theater at Madison Square Garden, Stephen Thompson might as well be considered an honorary New Yorker in the lead-up to his challenge for Tyron Woodley’s UFC welterweight title on November 12.

He’s even become accustomed to that New York attitude that is synonymous with the Big Apple.

“I love it,” he said. “I've gotta work on my accent though. I've still got that southern accent.”

Accent or not, New Yorkers love winners, and Thompson has earned his shot at the crown with seven consecutive victories, leaving him as the clear-cut next in line for the title Woodley won in July with a stirring first-round knockout of Robbie Lawler.

“I kinda knew it was gonna happen,” Thompson said. “Of course we didn't find out until … (Woodley) announced it, but I had one of those gut feelings that they couldn't give it to anybody else. It's gotta be me.”

And that’s just fine with the new champion, whose motivations for this fight aren’t about material things, but about making history in the first UFC event held in New York City. And he’s not stopping with November 12 either.

“(History) is important to me,” Woodley said. “Some people in our sport now are forgetting about that; they're just thinking about the dollar signs. But history and legacy are important to me, and history repeats itself, so hopefully I'm one of those greats that will be coming back in the coming moment.”

Knocking out one of the sport’s superstars in Lawler was a good start, but despite strapping that title belt around his waist, the 34-year-old Woodley admits that he hasn’t really been able to enjoy being champion of the world.

“No, I have not been able to enjoy it, but after this fight I will,” he said. “I can celebrate and I can feel happy about it. Robbie, it was a little tough to celebrate after a victory. I wanted to be respectful to a friend and a teammate, and I couldn't really enjoy that moment as I will this one.”

Woodley and Thompson are neither friends nor teammates, but there is plenty of respect between the two, and on a stacked card, this may be one of the most intriguing matchups, with the big question being, will Thompson’s ground game be called into play this fall? If it is, he’s ready, as he’s come a long way since the lone loss of his pro career to Matt Brown in 2012.

“This journey has been crazy,” Thompson said. “To be honest, I feel blessed to be where I'm at. I worked really hard, just putting my body through everyday abuse, over and over and over again. I'm really working on my wrestling and my jiu-jitsu, which that fight with Matt Brown opened my eyes to what I needed to work on, but this journey has been awesome. Win or lose, I'm living it, I'm living the dream.”

It’s up to Woodley to crush that dream and leave New York City with his title intact.

“I've kept an eye on him before he was actually even in position to be where he's at, so it doesn't surprise me that he's made it,” the champion said. “There's been four or five guys that I saw making the rise - him, Gunnar Nelson, Brandon Thatch, Neil Magny. He's just the one that made it out as the cream of the crop. I respect him, but come November 12, nobody's taking this belt.”