In the wee hours of Sunday morning at the Ibirapuera Gymnasium, Thomas Almeida, another compatriot, showed the world he is ready to make his mark by holding his own coming out party in front of his hometown fans in Sao Paulo.

“Thominhas” is hardly a secret – he entered Fight Night: Belfort vs. Henderson 3 with a perfect 20-0 MMA record, including a 3-0 mark in the UFC’s bantamweight ranks. But the performance he put on against another hot prospect in the sport, Anthony Birchak, was just what he needed to not only send the crowd into the frenzy, but also to make his intentions known:

Birchak, another up-and-coming prospect with a bright future and a 12-2 mark entering the night, was expected to be the No. 8-ranked Almeida’s toughest test to date. In the buildup, Birchak was sure he found the weakness that would bring Almeida to his knees. But at the end of a breathtaking exchange, it was Birchak plopped on the ground 4:24 into the first and only round of their fight.

“I didn’t realize what just happened,” Almeida proclaimed. “I was prepared, trained a lot, and this bout had something special: It was in São Paulo, my hometown. It gave me a greater motivation. I put pressure on myself, and I’m really happy and thrilled for having people in my team that I love and helped me to win.”

What happened was simple: The pair of fighters came out of the gates and started swinging – with both landing over 20 significant strikes each in just over four minutes of action. But the overall strength of the Brazilian’s strikes – connecting with vicious kicks and punches – led to the deciding moment where a left-right combination left Birchak unconscious on the ground. 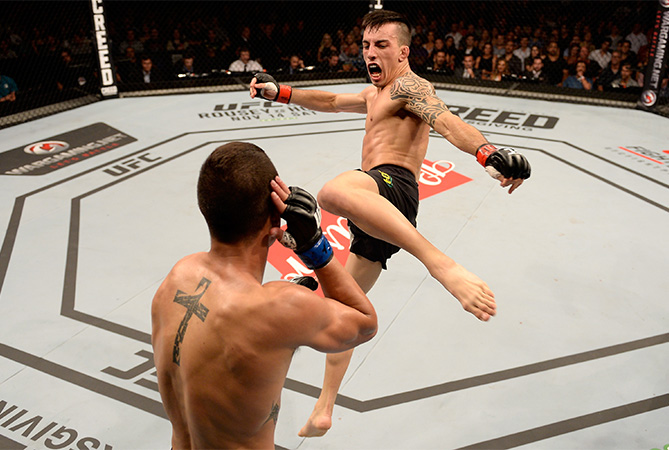 The win got Almeida adoration from the sold-out crowd and extra cash in his pocket as he earned one of four performance bonuses. It is the fourth time in four visits to the Octagon that he leaves with an extra $50k – his third performance bonus to go along with one fight of the night award.

Co-main eventer Glover Teixeira was preparing for his fight immediately afterwards, but he couldn’t help but take notice of the crowd reaction and the performance.

“Oh my god, unbelievable. His style is so calm, he’s unbelievable,” Teixeira said. “He’s got everything in his hands – he’s young, he can do it all.

“He’s the real deal, no doubt about it. He’s fighting the best – his last fight he got caught and showed a lot of heart and determination. He’s a true champion.”

To that end, Teixeira and Almeida agree. More is yet to come.

“I’m very fulfilled, but I want more challenges,” Almeida said. “I want to grow. And I’m always going after my dream to get the belt and defend the title for a very long time. I’m so very happy. I’m young, I have my mind at a high place, I’m focused … I’m very happy."