Thomas Almeida: Focused On The Finish

It may be the most impressive streak seen in the UFC since former bantamweight champion Renan Barao’s 35-fight unbeaten run, but Thomas Almeida doesn’t think too much about his perfect 19-0 pro mixed martial arts record, one he will put on the line against Brad Pickett this Saturday at UFC 189 in Las Vegas.

His fighting philosophy, built from the ground up with the Chute Boxe Diego Lima team in Sao Paulo, Brazil, is one of getting the victory as fast and emphatically as possible, and if that doesn’t happen, at least he went down swinging. So while some add more and more wins to an undefeated record and fight more and more conservatively in order to protect it, Almeida’s first two UFC victories over Tim Gorman and Yves Jabouin show that playing it safe is a phrase that isn’t in his vocabulary.

“I always want to win, and I have never picked my opponents,” he said. “Yes, some people like to play it safe, and they try to relax to get a decision.  At Chute Boxe, we 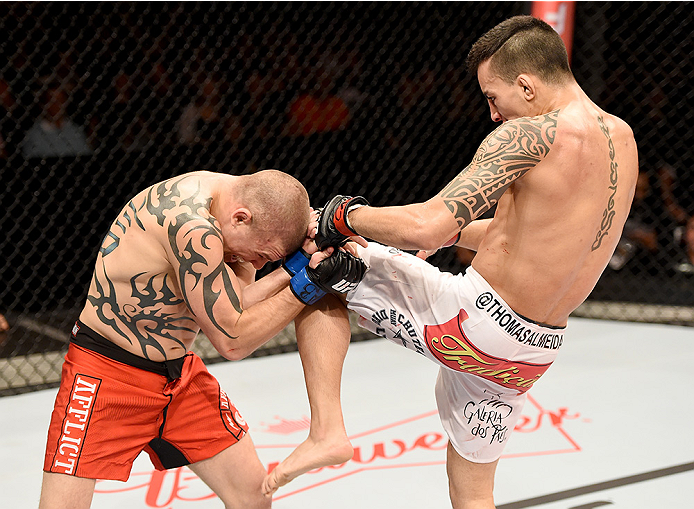 always train to finish. Some people train to win decisions.”

It’s almost a disdainful comment from the 23-year-old southpaw, the idea that someone would step into the Octagon and look to outpoint their opponent and not fight to finish. It’s the way he was raised in the fight game, but he also has a point, because when it comes down to it, the difference between winning and losing is the difference between doubling your paycheck and going home with only your show money.

“Fighting now is a business,” Almeida admits. “You lose and your career gets hurt. You get to big show, and you fight not to lose. Some fighters practice how to stall, hold to the fence, hold to the ground. There is so much to lose. But I am very lucky to train at Chute Boxe, where everything is to finish. I don’t even know how to stall, and will never train to stall, just to finish people.”

Almeida should make the Chute Boxe greats from the team’s seminal years – Wanderlei and Anderson Silva, the Rua brothers, Rafael Cordeiro – smile. But the appeal of “Thominhas” goes far beyond that, as fight fans have been buzzing about his first two UFC efforts, both of which have earned him post-fight bonuses, and the UFC must like him too, as they’ve put him on the main card of the biggest event of the year thus far. He’s staying humble and focused though, not getting sidetracked by anything that can usually sidetrack a 23-year-old. 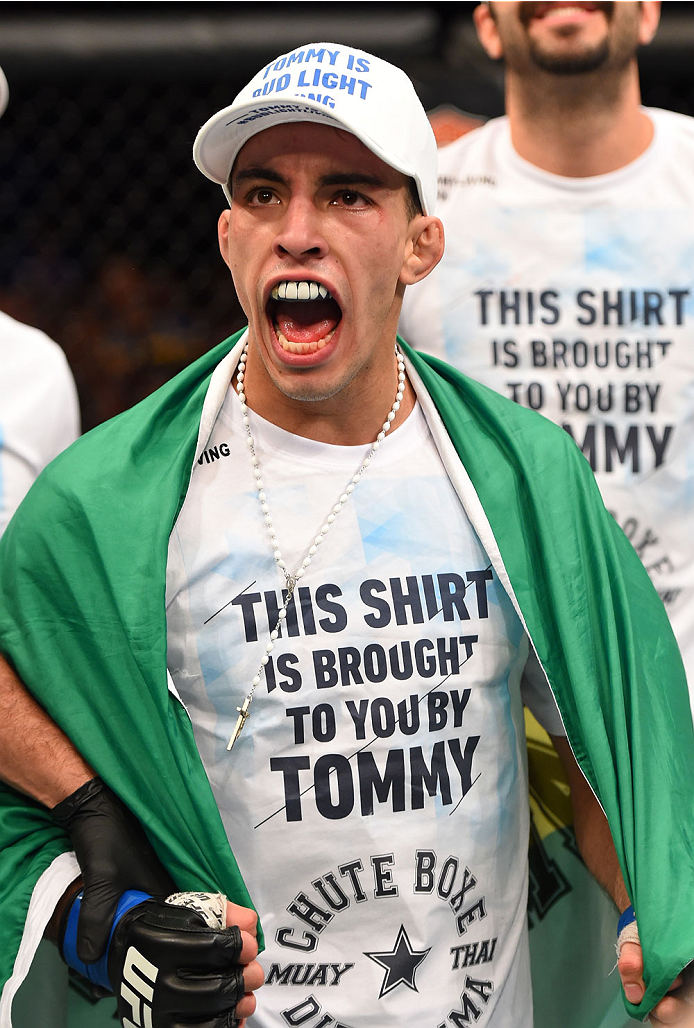 “More people know me now, but I have great coaches and training partners that keep me focused on what is important,” he said.

“Brad is very good fighter with a lot of power, and I will have to train very hard,” he said. As for appearing in a prime location on the sport’s biggest stage, he says “I just focus on the fight. If you start thinking about other things, you lose focus.  I just think about Brad Pickett, and how I can finish the fight.”

It always comes back to the finish, and it’s why Almeida may be on the brink of big things in the UFC, following in the footsteps of the Brazilian greats that came before him. His reaction to that?

“I really only focus on my next fight, but I love to stay busy.”