Take a look back at a historic event: UFC 128 in Newark, New Jersey, featuring Jon Jones vs Shogun Rua and much more
By Thomas Gerbasi, on Twitter: @TGerbasi • Mar. 19, 2020

It should have been just another fight day, but as soon as reporters walked into the press room at Prudential Center in Newark, New Jersey for UFC 128 on March 19, 2011, everything changed, as they were informed that just a few hours before Jon Jones was going to step into the Octagon to face Mauricio “Shogun” Rua, he and his coaches had foiled a robbery in a local park

That alone made UFC 128 memorable, but little did we know that on a card also featuring a host of Octagon debuts from former WEC stars, Jones would be starting an unprecedented run as the greatest light heavyweight to strap on the gloves.

That was some fight day. Nine years later, we take a look back at UFC 128. 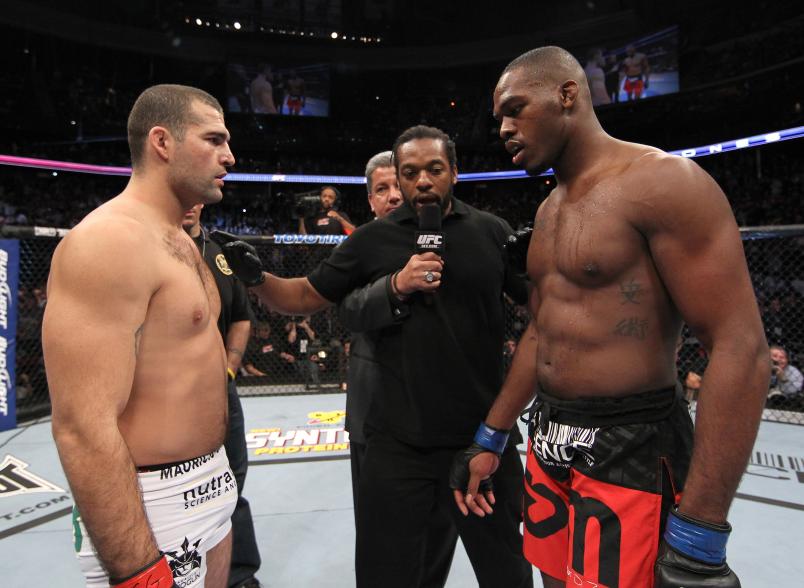 NEWARK, NJ - MARCH 19: (L-R) Mauricio "Shogun" Rua and Jon Jones face off prior to their light heavyweight championship bout at UFC 128 at the Prudential Center on March 19, 2011 in Newark, New Jersey. (Photo by Al Bello/Zuffa LLC/Zuffa LLC via Getty Images)

NEWARK, NJ - MARCH 19: (L-R) Mauricio "Shogun" Rua and Jon Jones face off prior to their light heavyweight championship bout at UFC 128 at the Prudential Center on March 19, 2011 in Newark, New Jersey. (Photo by Al Bello/Zuffa LLC/Zuffa LLC via Getty Imag

Champion. At 23 years old, Jon Jones put that title next to his name after a dominating third round stoppage of Mauricio “Shogun” Rua that justified all the pre-fight hype and may one day have fight fans asking “where were you when ‘Bones’ Jones’ won his world light heavyweight championship?”

Winning the title wasn’t even all he did, as Jones - in the history books as the UFC’s youngest world champion ever, replacing Josh Barnett - foiled an attempted robbery earlier on fight day in a Paterson, New Jersey park that he and trainers Greg Jackson and Mike Winklejohn visited for a pre-fight meditation session.

But at night, it was all about the fight.

Jones tried to end things immediately with a flying knee, and though it didn’t land flush, the blow did rattle Rua, who got taken down moments later and kept there for much of the round.

Rua was still unable to get his offense in gear in round two, with Jones continuing to dominate both standing and on the mat. 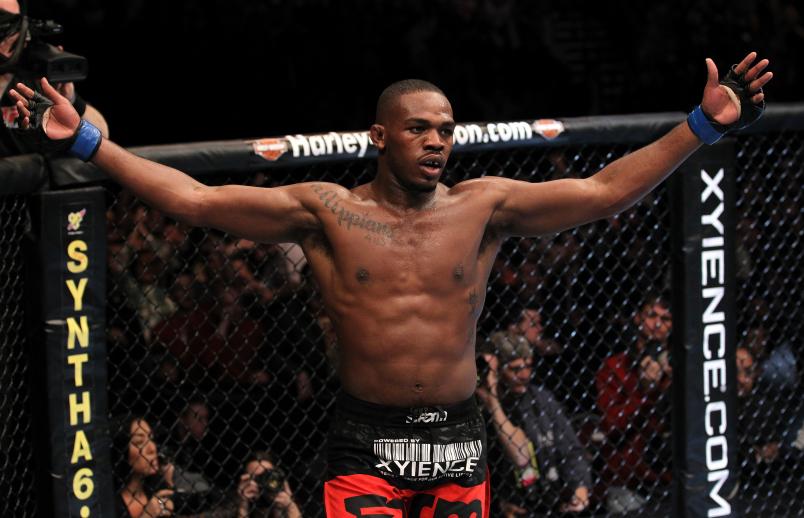 Entering round three, Jones’ face was unmarked, while Rua’s showed the effects of the previous ten minutes, and soon, the challenger unleashed his full arsenal on the battered champion one crushing shot at a time. Rua courageously staggered to his feet, but all that was left was a finishing series of shots from Jones that dropped Rua and brought in referee Herb Dean to end the bout at 2:37 of the third round.

Two former WEC champions met in the UFC Octagon for the first time in the co-main event of UFC 128, and it was Urijah Faber beginning a new chapter in his storied career as he bounced back from some rough moments in the first round to defeat Eddie Wineland via unanimous decision in a bantamweight bout.

After winning his seventh consecutive UFC bout, this time halting previously unbeaten Kamal Shalorus in the third round, Jim Miller certainly made it clear that he was ready for a lightweight title shot.

Middleweight contender Nate Marquardt put on his hard hat and went to work against Dan Miller, drilling out a shutout decision win over his New Jersey foe in a grueling three rounder. 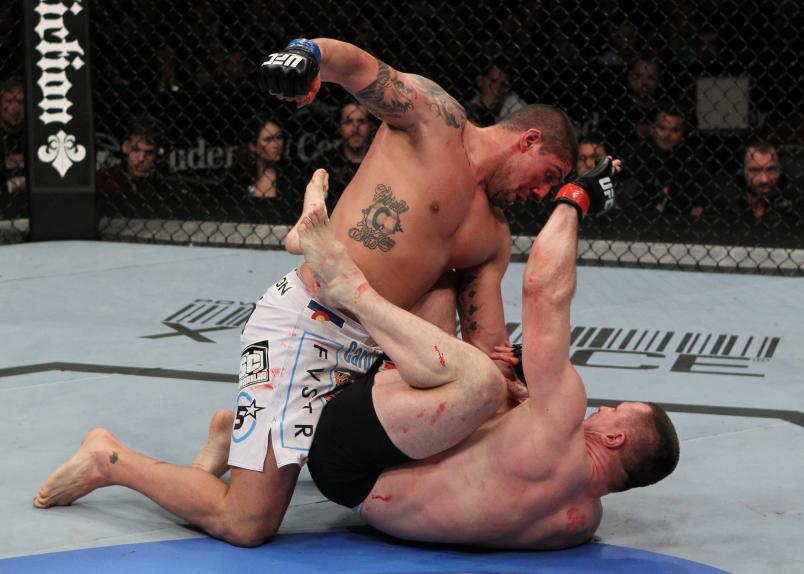 Brendan Schaub got a gut check and a highlight reel memory the day after his 28th birthday, as he battled through adversity, blood, and a second round point deduction to knock out Mirko Cro Cop in the third round of the heavyweight main card opener.

Light heavyweight knockout artist Luiz “Banha” Cane got back on track after a two fight losing streak, stopping returning Eliot Marshall in the first round of their UFC 128 preliminary bout.

Unbeaten Edson Barboza kept his perfect record intact with a close and exciting unanimous decision victory over Anthony Njokuani that earned both men Fight of the Night honors. 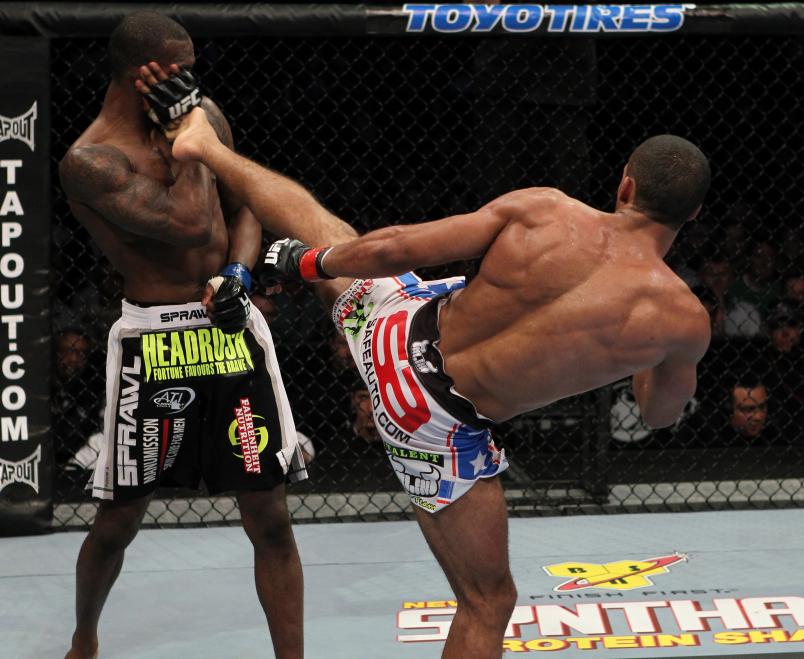 Welterweight vet Mike Pyle didn’t show the spectacular form he displayed in his UFC 120 win over John Hathaway in October 2010, but he did enough on the judges’ scorecards to take a three round unanimous decision win over Ricardo Almeida.

Sporting a new nickname and a new fight venue, former WEC bantamweight contender Joseph “Joe-B-Wan Kenobi” Benavidez made a smooth transition to the Octagon with a hard-fought three round unanimous decision win over scrappy Ian Loveland.

Late replacement Costa Philippou was game throughout his catchweight bout against Nick Catone, but the Brick, New Jersey native was too much for him on the mat as he pounded out a three round unanimous decision win.

Former WEC featherweight Erik “New Breed” Koch introduced himself to UFC fans with a bang, knocking out veteran Raphael Assuncao in the first round to land himself a $70,000 knockout of the night bonus.