Thirteen years in, Stephens is hitting his best stride 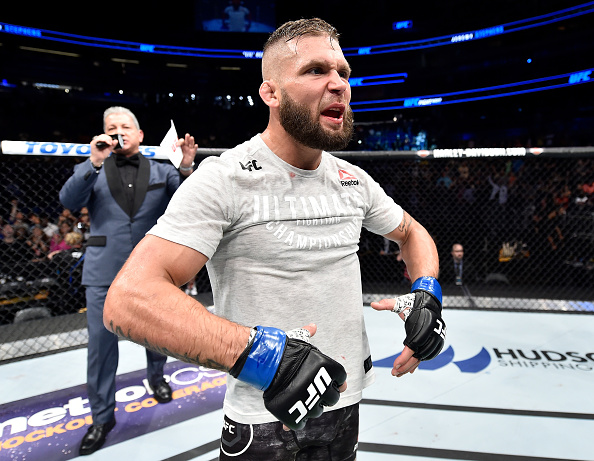 Jeremy Stephens celebrates after his knockout victory over Josh Emmett in their featherweight bout during the UFC Fight Night event at Amway Center on February 24, 2018 in Orlando, Florida. (Photo by Jeff Bottari/Zuffa LLC/Zuffa LLC via Getty Images)" align="center" />
There aren’t many athletes who finally hit their stride and begin performing to their full potential 10 years into their careers. In most cases, you have a pretty strong indication of who they are, what they’re capable of and where their ceiling rests within three or four years; seven max.

More than 13 years into his professional career and staring down his 43rd professional fight – 28 of which have already come inside the UFC cage – Jeremy Stephens is performing at his absolute best.

“It’s just another day at the office, my man,” laughed the surging featherweight when asked about being in the midst of the best run of his career 11 years after he stepped into the Octagon for the first time. “You guys are counting the numbers, but I’m just having fun.”

For quite a long time, Stephens wasn’t having nearly as much fun.

Before embarking on the three-fight winning streak that carries him into his showdown with Jose Aldo in the co-main event of Saturday’s UFC on FOX event in Calgary, the 32-year-old Iowa native had a sub-.500 record in the Octagon.

There had been standout performances – the Street Fighter II finish of future champion Rafael Dos Anjos, the knockout wins over Rony Jason and Dennis Bermudez – but the consistency needed to make a real run at contention had always escaped him. Stephens fought with unbridled aggression, pressing forward and swinging for the fences with every strike. Sometimes it worked, but every time he stepped in with a true contender, things didn’t go his way.

They were too slick and too patient; matadors sidestepping the charging bull at the last second and emerging triumphant.

After beginning his career as a lightweight, Stephens opted to drop to featherweight at the start of 2013 and quickly racked up three straight wins, including the highlight reel finish of Jason in Brazil and a unanimous decision win over Darren Elkins, who was every bit as tough an out then as he is today.

It was followed by the most important stretch of the powerful finisher’s career – a seven-fight run against a collection of elite competitors where Stephens earned just two wins while dropping decisions to Cub Swanson, Charles Oliveira, Max Holloway, Frankie Edgar and Renato Moicano.

That last one was a split decision. It was also the last straw for the frustrated fighter.

“It was f***** miserable to be losing like that to guys that I know that I can beat,” said Stephens. “I had to go back and figure out what the f*** was really wrong.”

The problem, as it turned out, was his relationship with the team at Alliance MMA in San Diego.

He had traded in the Midwest for Southern California several years prior, but never went all-in with the all-star squad helmed by Eric Del Fierro and home to former bantamweight champ Dominick Cruz and countless other top contenders.

“I was never really fully committed to Alliance,” admitted Stephens. “It was either 50/50, 60/40, 70/30 and what I mean by that is I had other coaches around that were pulling me in other directions. I was constantly battling myself – ‘Do I need this coach?’ – and after the Moicano loss, I was f***** fed up.

“I was like, ‘You know what? I’m not going to tolerate this any more. I’m f***** sick of this’ and I hashed everything out with Eric Del Fierro at Alliance, my head coach. He has always been on board, we’ve always seen the fights the same way and I sat down with him, reached out to Dominick Cruz and (said), ‘I’m tired of letting myself destroy myself.’”

In the three fights since that split decision loss on FOX in April 2017, the veteran featherweight has delivered the three most complete and impressive performances of his career, emerging as a legitimate title contender in the process.

At UFC 215, he methodically kicked the legs out from under former Strikeforce lightweight champ Gilbert Melendez before beginning this year with second-round stoppage wins over Dooho Choi and Josh Emmett five weeks apart, setting the stage for his showdown with Aldo this weekend.

“Those are lightning bolt performances,” he said regarding his handiwork against Melendez, Choi and Emmett. “That’s what happens when you fully commit and get on board with yourself and you’re clear-minded, focused, dialed in and doing what I came to do and that’s fist fight.”

No longer the bull that sees red and charges forward without a plan, Stephens has become his own version of the savvy veterans that got the better of him during that crucial 2-5 stretch earlier in his career.

The power is still there, but it’s measured, moderated, paired with fundamentals that break opponents down. If an opportunity to finish presents itself, he’s still quick to exploit it, but he’s no longer chasing highlight reel stoppages because a dominant effort and a clean sweep of the scorecards is a win all the same.

“I’m cool, calm, calculated, precise, smooth, patient; calm like a bomb,” said Stephens. “I’ve been in there millions of times with the best of the best – the best kickers, the best punchers, the best guys – and now that I’ve got all those things dialed in and I’m letting a mastermind like Eric Del Fierro play me like he’s playing Mortal Kombat and I’m his favorite character, he knows my strengths and weaknesses and how to take me, let me go in there and let it ride.

“I know I’m the best in the world; I’ve always believed that, but I was never fully on board with myself and my coach to make those things happen.”

But he is now and there is no denying the results.

“I put myself in this position to be here, to be showing up July 28th, fighting a former champion, someone as decorated as this guy,” he said of his fight with Aldo. “I don’t look past him, I’m looking right at him and I’m going to go right through him.

“That belief in myself is at an all-time high right now. You can put anybody in front of me and I’m going to take them out.”