Things are Getting Good Again for Shane Roller

"He’s a tough guy and I think it’s gonna have some fireworks in it. I just hope to come out on top and get my hand raised.” - Shane Roller 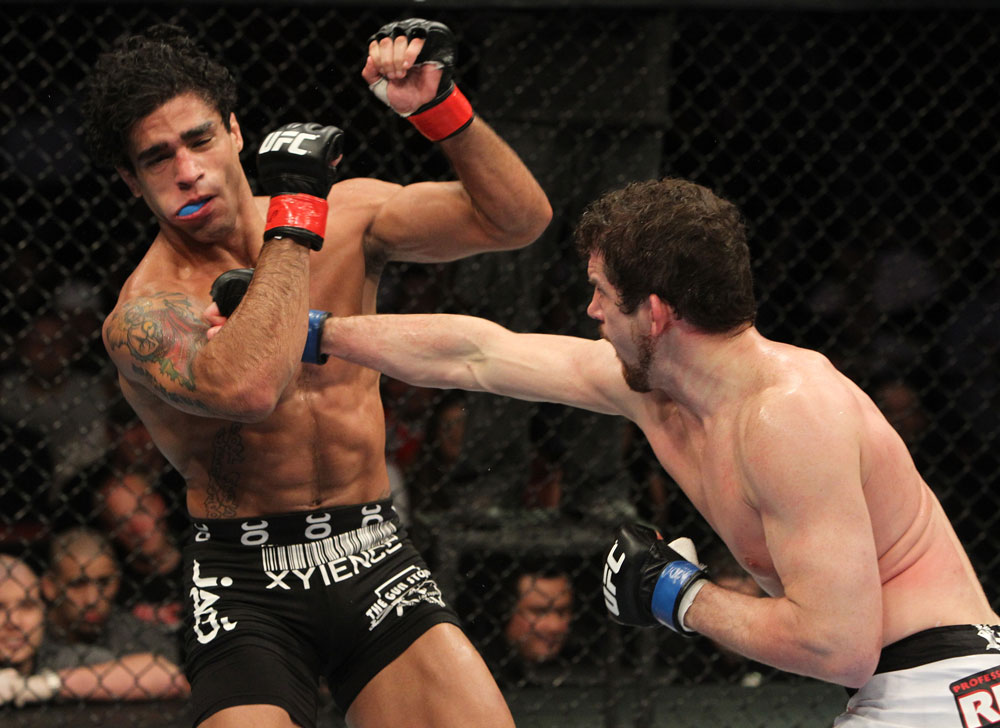 Life isn’t easy for a fighter at 155 pounds. Take Shane Roller for example. Not only do his opponents have to worry about the wrestling of the three-time Oklahoma State University All-American and an ever-developing submission game that has ended six of his 10 mixed martial arts victories, but in March he showed off some dynamite in his right hand when he starched Thiago Tavares in the second round of their bout.

Yeah, there are no gimmes in the lightweight division. And that goes for Roller as well. So just one fight removed from his Octagon debut against Tavares, the former WEC standout will get a big step-up bout against streaking contender Melvin Guillard this Saturday night in Las Vegas.

“I’m definitely ready,” said Roller. “I think I’m ready to fight anyone in our weight class and that’s why I got into fighting, because I thought I could be the best. That’s my goal. I’ve evolved as a fighter, I’m getting better and better, and I definitely think that I should be put in that category (of contenders) if I beat Melvin. He’s one of the top guys in the weight class, and I’m ready for the challenge.”

A year ago, you might have questioned whether he was. Still a raw talent and a work in progress, Roller showed off his ground game in impressive fashion with WEC wins over Todd Moore, Mike Budnik, Danny Castillo, and Anthony Njokuani, but when he was submitted in a title elimination bout by eventual WEC champ Anthony Pettis, it dropped him a notch or two.

Since that fight, the Tulsa native has relocated his training camp from Las Vegas to Dallas, giving him the same top-notch training that he got in Nevada (his team remains the same) while allowing him to be closer to his family.

“I’m so much more happier here in Texas,” said Roller. “It’s four hours away to my family and my wife’s family, so any weekend we can hop in the car and see them and not have to spend a thousand dollars on plane tickets to get back to see them. It’s great and our families are happier, and anytime you’re happy, it makes the training and everything easier.”

In the cage, Roller earned a Submission of the Night award in his final WEC bout against former champ Jamie Varner last December, and then added a Knockout of the Night award against Tavares. So if the pattern continues, his UFC 132 bout with “The Young Assassin” should be Fight of the Night, right?

“I hope not – that means it’s gonna be a battle,” he laughs. “But that’s what I trained for. He’s a tough guy and I think it’s gonna have some fireworks in it. I just hope to come out on top and get my hand raised.”

He’s done the work to get there, and by adding new wrinkles to his attack with each bout, he becomes more dangerous to defend and to formulate a game plan for. Guillard has almost taken a similar route in his UFC career, changing from a one-dimensional knockout artist to a fighter whose underrated wrestling is now a key part of his ability to keep the fight wherever he wants it. So does Roller think Guillard will want to test his wrestling against the former All-American?

“I don’t think so,” he said. “In all his fights he likes to stand up. That’s his thing. He has some decent wrestling and I think he’ll try to use that to try to stay standing. You know me, I like standing up sometimes, but my go to thing is the ground, and at some point in the fight, that’s what I’m gonna be looking for.”

It’s nice to have a little something extra on your fastball though, and when Roller unleashed his right on Tavares, it sent quite the jolt around the MMA world and through Texas’ Team Takedown.

“I’ve been doing well, sparring at the gym, but I’ve never actually landed a really good knockout punch in a fight, so it was huge and it did a lot for my confidence,” said Roller of the KO, which did get put in heavy rotation in the days following the bout.

“My coach, (Marc) Laimon, is a big computer guy, so we watched it a lot, even at the airport,” laughed Roller. “We kept rewinding it and watching it. I always watch all my tapes, win or lose, but I definitely rewound the last 10 seconds of that fight quite a bit.”

Not these days though. He’s had to put Tavares in the past and focus strictly on Guillard, whose current four fight winning streak includes a KO of the Night of his own against Evan Dunham in January. Roller has no illusions about the task he’s facing this weekend.

“First off, he’s an explosive athlete,” he said of Guillard. “I think he’s one of the best strikers in the lightweight division in the UFC, so it’s definitely gonna test my standup, but I’m excited for it. He’s gotten more well-rounded, he’s defending shots better, and is just putting it all together. And that’s why he’s on a four fight win streak, so I’m excited to fight someone like that.”

Roller means it too. Last August, he had seen his dream of a title deferred by Anthony Pettis, but now, he’s in the UFC and one win away from announcing himself as a contender in the organization’s most crowded division. That’s an accomplishment in itself, but he’s just getting started.

“I’ve developed as a fighter and evolved,” said Roller. “It’s been a year since I lost to Pettis, and that was one of the lower ends because I was so pumped and ready to get my title shot in the WEC, and then I lost and went from a huge high to a low. And now I’m getting back on the horse, staying at it, and having some success, so it’s getting good again.”