"I hope I get the best Matt Hamill possible because that is the one I want to beat." - Thiago Silva 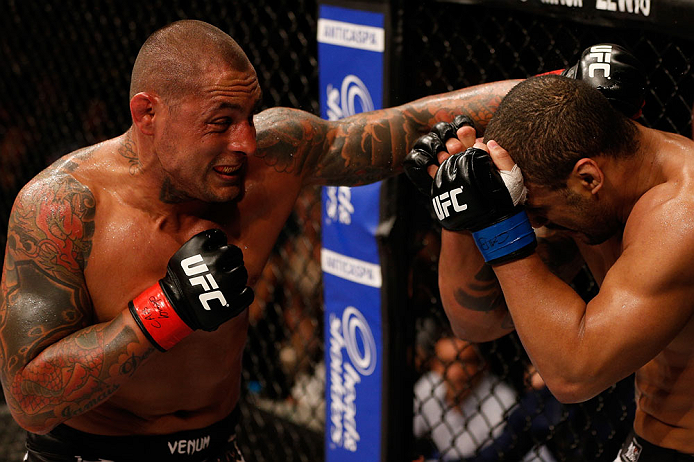 The Brazilian knockout artist’s stone-cold stare and his aggressive killer instinct inside the Octagon have made the 30-year-old one of the most feared light heavyweights on the planet.

While he’s yet to reach the championship level of the UFC’s crown jewel division, that doesn’t take anything away from the fact Silva is one of the toughest customers in the game.

And that is where the reputation part comes in.

Since coming to the sport’s biggest stage in 2007, the Team Blackzilians fighter has picked up eight victories. Two of those wins would be overturned to no contests in the aftermath, and erased what would have been dominant—and in one case brutal—lopsided beatings.

Nevertheless, Silva served out his suspension time and returned in impressive fashion when he faced former Strikeforce light heavyweight champion Rafael “Feijao” Calvacante at UFC on FUEL TV 10 in June. With a lengthy stint on the sidelines, a slightly rusty version would have been acceptable, but not only did Silva return in top form, but showed a new wrinkle in his game with measured aggression.

Throughout his ten previous bouts under the UFC banner, the south Florida transplant was “all go” from bell to bell. In his bout with “Feijao,” Silva did his damage in waves, and waited until his opponent was wounded before he swarmed in for the finish. With Calvacante on wobbly legs, Silva measured up and drove the point home in definitive fashion.

“As I continue to mature in my life and within MMA as well, I continue to grow mentally as well,” Silva said. “Self-control is not something that has always come easy for me, but I am getting more mentally tough and confident that my instincts will tell me when to become more aggressive in the fight. I try to stay patient as long as I can, but the moment I see a weakness, I’m going to attack.”

Where every victory competing at the highest level of the sport is a trophy for the wall in a sense, Silva’s knockout over Calvacante in Fortaleza came with a few extra payoffs. In the financial sense, he picked up two fight night bonuses for Knockout of the Night and Fight of the Night, but in the realm of justice served, he put a thunderous stamp on the pre-fight grudge that had brewed between the two men.

Again, Silva may not be a title contender just yet, but he is most certainly to be feared when the cage door closes, and has carved out a place all his own on the 205-pound landscape.

That being said, the biggest questions regarding his potential will come on the road ahead because his past is set in stone. On one hand, Silva owns a resume lined with opponents he’s separated from their consciousness in one brutal form or another, and on the other there is a fighter with a checkered past. He has all the tools - both tangible and intangible - to be a star in the UFC fold, but the doubt that continues to hover over his journey through MMA can only be silenced by him.

“I feel very good,” Silva said. “My mind is in a good place now. I have the best training with my teammates The Blackzilians and my coaches. My body is responding very well.”

Each trip into the Octagon provides an opportunity to do just that, and he intends to make the most of his time inside the cage from here on out. He will have the perfect opportunity to take another strong step in the right direction when he faces former TUF alum Matt Hamill on Wednesday at UFC Fight Night.

“The Hammer” is coming back from a brief hiatus and doing so because he feels there is something he needs to prove. While Silva admires the determination his opponent is showing stepping back into the Octagon, he believes the Ohio native has made a tremendous mistake in doing so against him.

“I think you need to be committed in order to step in the cage with me,” he said. “I hope I get the best Matt Hamill possible because that is the one I want to beat. I think this is a good matchup for me. I understand where Matt will try to take this fight and I’m sure he understands how I fight as well. I’ll be planning to finish this fight.”

While the battles on the road ahead will certainly be telling, the immediate step will come with added incentive in the form of his Brazilian countrymen. The bout with Hamill will mark the second consecutive outing in which Silva has been able to compete in his home country, and despite the ups and downs he’s experienced throughout his career, he promises his performance on Wednesday will give the passionate Brazilian fan base something to get excited about.

“It feels great to be back in Brazil,” Silva said. “I feel a lot of love from the Brazilian fans here and I plan to give them a great show. They know what I’m all about in Brazil and I won’t disappoint my fans.”